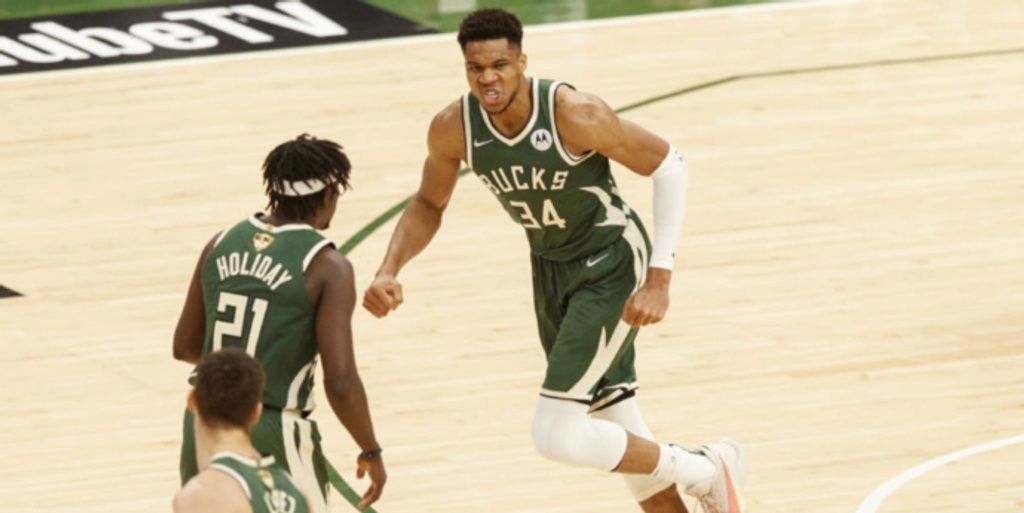 Pressure Points: How the Bucks torched the Suns in Game 3

Through two games, the Phoenix Suns looked to have things in the bag against the Milwaukee Bucks. Chris Paul was dancing against mismatches. Devin Booker was sprinkling in jumpers. Deandre Ayton was dominating the paint on both ends of the floor. Role guys, particularly Cam Johnson, were filling the gaps with timely shot-making and heady defensive plays.

Then, the Bucks went home.

More specifically, the Bucks were able to take matters into their own hands.

Their 120-100 victory over the Suns in Game 3 was huge for obvious reasons. No team has ever come back from a 3-0 Finals deficit; snagging a home victory puts them closer to tying things up.

The Bucks were able to post their best offensive (123.7) and defensive (103.1) ratings of the series in Game 3. The "how" of those numbers are what really stand out about the Bucks' victory.

In Game 1, the Bucks deviated from their base defensive coverage. Typically, a team that plays their matchups pretty straight while dropping (deeply) against pick-and-rolls, the Bucks opted to cross-match and switch virtually everything,

The switch, figuratively and literally, made sense on the surface. Keep actions in front to stay out of rotation, and cross-match in a way that took away easy mismatches. The Bucks opted to toss PJ Tucker on Chris Paul to begin that game in anticipation of 1-5 pick-and-rolls between Paul and Ayton.

What eventually happened, however, was that the Suns were able to find exploits. Consistently.

The post-fronting against Ayton put a ton of strain on the backline. The Suns were able to feed Ayton in advantageous spots. Even when they had to work a little harder, counters were found. The high-low sequence between Johnson and Ayton may have been the Suns' best possession in Game 1.

Had to break the thread to give a quick shoutout to the Suns for being such a high IQ (High-Q?) club.

This possession was a great example of PHX taking what MIL wants to accomplish, and flipping it on its head.

Paul in particular was able to dictate terms. He went after Brook Lopez early. Bobby Portis was put in the torture chamber. Bryn Forbes. Pat Connaughton. It simply didn't matter after a certain point.

Fast forward to Game 3, and the Bucks' changes are evident. They put pressure on ball-handlers from the very beginning of possessions. It didn't matter who brought the ball up; Paul, Booker, and Cam Payne all had to deal with full-court pressure.

The story here is the pressure and the eventual turnover. Jrue Holiday picks up Paul at the free throw line to throw off Paul's cadence. Payne sets a screen to free Paul, forcing a switch (and giving us a Chris vs. Khris matchup)

Paul eventually tosses the ball away after changing his mind on the pull-up, but peep Holiday right before Paul rises up. 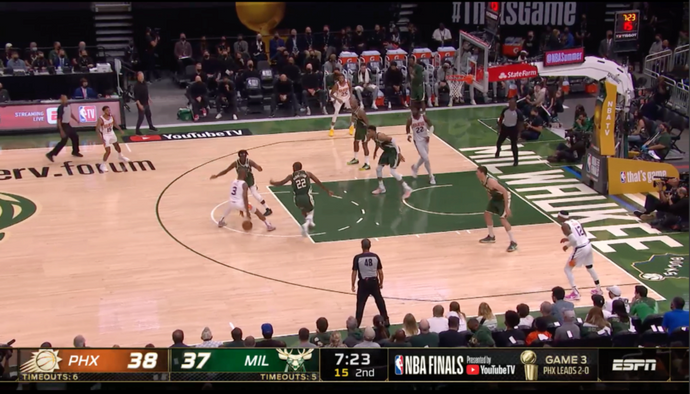 That stunt from Holiday was not something we saw much of from the Bucks in Game 1. The stunts were consistent in Game 2, though the Bucks found themselves struggling with the balance of helping and recovering back out to shooters.

In Game 3, the Bucks did a much better job of clogging up driving lanes with timely stunts, while still being in position to recover and close-out if necessary. Mixing that kind of off-ball activity with more selective switching made the Suns have to work a heck of a lot harder in the half-court. That, of course, was after being made to work to even get the ball across half-court due to the full-court pressure.

There aren't enough good things to say about Giannis Antetokounmpo right now. Barely two weeks removed from what looked like a season-ending knee injury, the two-time MVP looks as dominant as ever. Heck, he looks more dominant.

As if that wasn't enough, Giannis followed that up with a 41-13-6 performance in Game 3.

He bludgeoned the Suns inside. Feasting in transition with long strides and wider eurosteps. He crushed the Suns on the offensive glass; he snagged four of them, bringing his series total to 10 through three games.

What really stood out was how strategic the Bucks were in getting Giannis favorable looks in the half-court. When discussing half-court spacing, we generally default to the shooting ability of whoever's on the perimeter.

That's obviously important, but the literal location of where players are stationed is an incredibly basic, yet underrated portion of the discussion. Stressing help defenders and putting them in no-win situations is the goal.

Think of it this way: having Steph Curry, Klay Thompson, and peak Reggie Miller on the court at the same time means little if they're bunched up beside each other, allowing the defense to zone up and account for them.

The Bucks did a good job of spacing around Giannis. On some possessions, they'd empty out a corner so that Giannis could roll into an open lane. That would turn ball screens or dribble handoffs into a true 2-on-2 endeavor.

You see the issue off the bat. Booker and Jae Crowder are defending this Holiday-Giannis action. The Suns don't want to switch Booker onto Giannis, so Crowder is forced into a drop.

Middleton is one pass away, so Mikal Bridges can't fully commit to helping from the nail. As soon as Crowder takes an extra step over to block Holiday's driving path, the window for a pocket pass to Giannis opens up. Since the corner is empty, there's nobody available to help Crowder with Giannis.

On other possessions where Giannis would operate in the middle of the floor, the Bucks would place one shooter in the corner, while keeping Middleton one pass away. Again, stressing out help defenders.

This is an example of the ghost-screening action mentioned in the Bucks' series preview. Middleton pops out, forcing Bridges to switch onto Giannis.

In an ideal world, the Suns would be able to build a wall here and cut off a Giannis drive. But look at the positioning: Middleton is one pass away to Giannis' right, while Holiday is stashed deep in the left corner.

Crowder comes over to help anyway, but the left side of the "wall" is pretty open because Booker doesn't help off of Holiday. Technically, he's not supposed to; helping off the strong side corner is generally a big no-no.

Middleton didn't have a loud night -- 18 points on 14 shots, seven rebounds, six assists -- but it's worth noting the coverage he saw.

Through the first two games of the series, the Suns were content to send single coverage his way. Bridges is one of the best on-ball defenders on the planet, as well as an ace screen navigator. With Middleton being a tough shot-maker but not necessarily a space creator, his shot-making didn't bend Phoenix's defense.

It was odd, then, that the Suns decided to start sending two to the ball against Middleton in ball-screen actions.

The gamble makes some sense on the surface. Middleton is a good-not-great passer with a adequate-at-best handle to boot. Pressuring him and then daring him to make quick, accurate reads is a fine gamble.

However, Middleton is still 6-foot-8. All he had to do was get rid of the ball quickly and the Bucks would be able to generate some goodness, scrambling the defense in the process.

Guess what Middleton did?

As a whole, the Bucks were able to move the ball and make the Suns uncomfortable. Having 28 assists on 43 made field goals (65.1 assist rate) is a winning formula. To that point: the Bucks are 15-4 in games they've assisted on at least 65% of their made shots this season, playoffs included.

For the first time all series, the Bucks were able to dictate terms on both ends of the floor. That type of force, complemented by all-time level play from Giannis, could be enough to turn this into a real series.