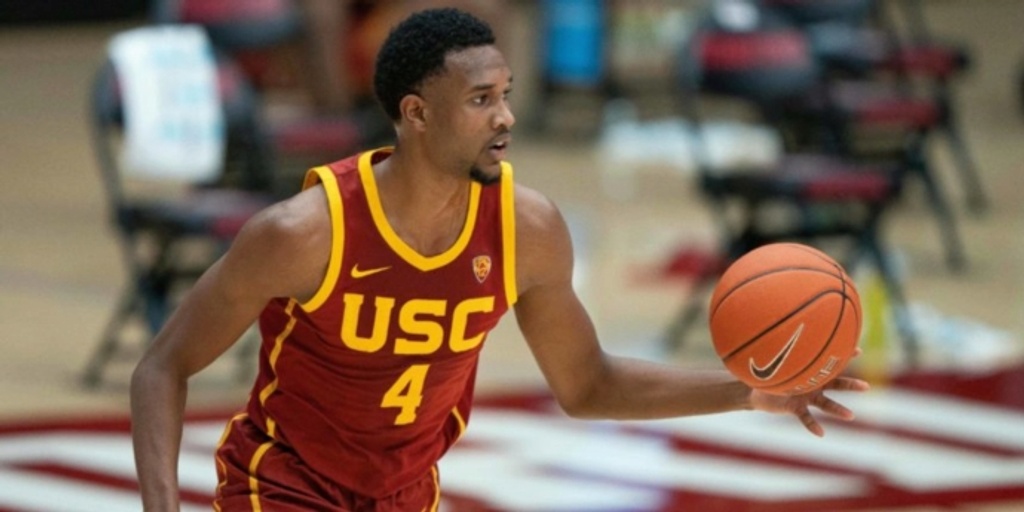 With the 2021 NBA Draft approaching, BasketballNews.com is breaking down the best prospects in each conference. Today, we’ll focus on players from the Pac-12 to keep an eye on.

As one of the top prizes of the 2021 NBA Draft, Evan Mobley headlines the group of prospects coming from the “conference of champions.” A prospect who is not expected to fall out of the top-3, the 7-foot, 215-pounder has a combination of size, skill, and mobility that creates a versatile player with two-way star potential. Mobley’s appeal starts at the defensive end since he possesses high-level rim protecting prowess that projects to get better as he adds weight. To go along with that, he’s also agile for his size and he utilizes his agility in tandem with his lengthy  7-foot-4 wingspan to allow him to switch onto wings and guards.

While his switchability and rim protection will be coveted by the teams at the top of the draft, what makes Mobley potentially special is offensive upside as a scorer and playmaker. Mobley possesses a soft touch around the rim, but also has moments of finishing over the top of defenders as well. His slender frame did give him some trouble with opposing big men in college, but that hasn’t stopped scouts from raving about him (especially considering what he was able to do at this size). Tying it all together is his potential with the ball in his hands. Mobley can grab a rebound, start the fastbreak, and find open teammates with solid vision and passing accuracy. Also, he could extend his shooting range to be a threat from all over the floor, so the sky's the limit for the big man.

Mobley is projected as the No. 2 pick to the Houston Rockets in our latest mock draft.

Projected as a lottery pick coming into the 2020-21 season, Ziaire Williams had an up-and-down year at Stanford, which has clouded his draft stock among scouts. While the lower points of his season may not have all been his fault, it’s made him one of the more difficult prospects to project in this class. Measuring above 6-foot-8 without shoes at the NBA Draft Combine, Williams has intriguing upside as an athletic wing scorer with solid defensive ability that you could see being in the league for many years to come.

His scoring upside does come with some hesitation as his three-point percentage came in at 29% over 20 games. However, since Stanford’s season was riddled with complications related to the pandemic and Williams missed time with injury, a true rhythm was difficult to find. What will benefit Williams is the flashes he showed this season as a dynamic scorer, secondary playmaker, and versatile defender. Where he lands will depend on NBA teams looking past his struggles and buying into the reputation he built during high school along with the appealing moments from his freshman season.

Williams is projected to go No. 18 to the Oklahoma City Thunder in our latest mock draft.

One of the older prospects in this draft, Chris Duarte is assumed to be one of the most NBA-ready prospects in this class (but more under the radar than guys like Corey Kispert and Davion Mitchell). Duarte is a 6-foot-6 wing who is an elite-level shot-maker who can immediately help any team around the league. With a smooth and high release, Duarte can shoot the ball off the catch or off the dribble very effectively and will be dangerous when he finds his openings. He also took on more ball-handling duties this season, which opened up his mid-range scoring and attacking the rim off the pick-and-roll. Duarte is also a very good team defender who was able to gather 2.7 stocks per game this season using impressive awareness on defensive rotations with the Ducks.

Duarte arrived at Oregon after being named the 2019 National Player of the Year by the NJCAA after two years at Northwest Florida State College. Two years later, Duarte projects to be drafted as early as the mid-first round and may have a ready-made role at the NBA level as soon as next season.

Duarte is projected to go 17th overall to the Memphis Grizzlies in our latest mock draft.

Following in the footsteps of James Harden as a guard prospect from Arizona State, Josh Christopher is a shot-creating wing who possesses good size, athleticism, and body control for an NBA shooting guard. At nearly 6-foot-5 and 215 pounds, Christopher has an NBA-ready frame that’s very explosive and he loves to play in transition. In the halfcourt, he also has a solid handle to create separation on drives or to open up his jump shot. Unfortunately, his jump shot and shot selection didn’t translate into being an efficient scorer from the floor.

During the draft process, Christopher will need to show development in his shot consistency to prove to teams that he has a ceiling as a high-volume scorer in the NBA. He also flashed potential as a passer, possibly showing scouts that he could handle more ball-handling opportunities in the future. If Christopher can put together his offensive game along with adding more technique and consistency to the defensive end, he’s got a chance to be a highly impactful NBA player.

Chrisopher is projected to be the 23rd pick to the Houston Rockets in our latest mock draft.

Joining Josh Chrisopher from Arizona State is Marcus Bagley, the 6-foot-8 freshman brother of current NBA player Marvin Bagley III. Although they share the Bagley name, Marcus’ play style differs from his brother’s, as he fits the big-wing archetype at the next level. The main skill that looks to translate for Bagley is his perimeter shooting, which early in the season was looking very solid but cooled down into January, resulting in a 34.7% three point percentage. Within the arc, he also had some struggles at low volume that he wasn’t able to improve since his season was cut to 12 games this year due to injury and COVID-19 pauses.

As a four-star recruit coming out of high school, Bagley feels like he has more to prove that he didn’t get the chance to show during his freshman year. He hasn’t fully committed to the NBA yet to keep his options open, but testing the draft process will give him useful feedback to apply to his game whether he stays in the draft or returns to school. The general consensus is that Bagley’s draft range is the early-to-mid second round, but he could climb into the late-first round because of his youth and potential upside as a 3-and-D player.

Bagley is projected as the 37th pick to the Detroit Pistons in our latest mock draft.

The UCLA Bruins impressed many this year during their run to the Final Four behind Johnny Juzang and company. Unfortunately, we’ll never know what would’ve happened if they had Chris Smith in the lineup, but it’s easy to see how he could’ve helped along the way. Smith is a 6-foot-9, 215-pound wing who can do a little bit of everything and, as a result, was getting NBA attention after his junior season. Coming into his senior year, he was looking to build upon the buzz, but he unfortunately tore his ACL after eight games and remained out for the season.

The interest in Smith is primarily because of his elite positional size and versatility, as he has the ability to guard up to four (and possibly five) positions depending on how his body continues to develop. Offensively, Smith gets to the rim with his length and athleticism, but he can also rise over defenders in the mid-range or from the perimeter to add to his potential as a three-level scorer. Over his eight games this season, he shot 50% from three on 20 attempts, which could have signaled an improvement in his shot that realistically could’ve settled in the 36-39% range.

Smith is projected to be the No. 43 pick to the New Orleans Pelicans in our latest mock draft.