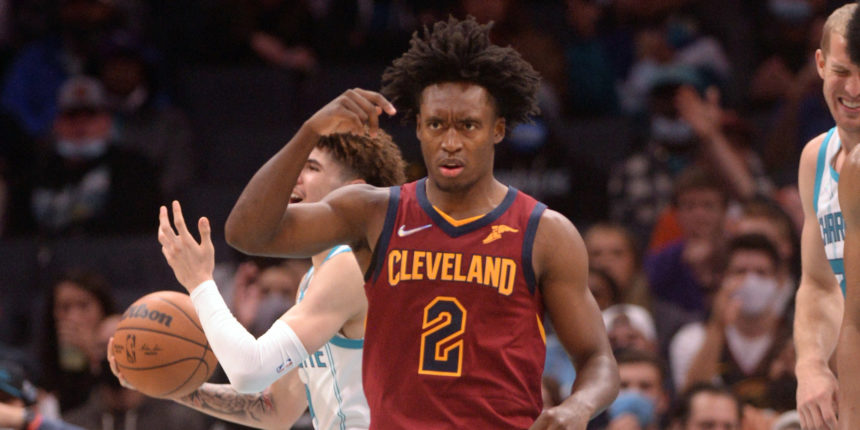 With Collin Sexton sidelined, who's next man up for Cavs?

This afternoon, the Cleveland Cavaliers announced an MRI showed that Collin Sexton suffered a meniscus tear in his left knee, meaning the fourth-year guard will be sidelined for an undetermined amount of time. The team said in a press release that Sexton “will undergo additional evaluation after which time his status will be updated.”

With the Cavs ripping through their difficult schedule at 7-4, the news is an unfortunate cloud over the good vibes that have guided the wine and gold to an incredible start. Prior to the contest in New York, Sexton had been averaging 16.0 points, 3.3 rebounds and 2.1 assists per game.

"He’s going through a lot right now hearing that, for anybody, especially Collin. We know how much he loves this game, how much he puts a lot of energy and his life into it. So just seeing him, it’s just devastating for me," Cavs big man Jarrett Allen said. "As a friend, as a teammate, just seeing him go down... I know he wants to be out there with us. We’re losing a lot losing him — as a person, as a competitor. He’s always out here giving it his all, and that forces us to give it our all. We want to match his energy. So he’s definitely gonna be missed.”

Although his shooting percentages across the board are down, his .300 three-point rate is the highest it’s been since coming into the league, and his game has become more efficient. He’s also had to make a major adjustment to the Cavs’ change in offensive strategy, spreading the ball around with fewer dribbles and more all-around involvement. Many detractors point to his nature of dominating the ball, however, Sexton has been tremendous off the ball as a cutter getting easy looks at the rim, and currently has the third-highest amount of potential assists on the team with 65. Defensively, the will to defend has been there as well. Of course, we all know how ridiculous his burst is in transition too.

"It’s huge. Obviously, the threat that he is. Games come down to getting a bucket, and a lot of teams switch and you’ve got to be able to beat your man," Bickerstaff said. "Collin is one of our guys who can beat his man and force teams to make different decisions on how they want to play their coverages and things like that. So the competitive nature that he plays with and how hard he competes, all of those things. We’re gonna miss him for sure.”

The truth is that Cleveland won’t easily fill the role of somebody who can drop 30 points in any game, and they certainly can't do it with one player.

"I think everybody’s just gotta tick-up a couple notches. We’re not gonna expect one person to get Collin’s 16 [points] a night," Bickerstaff said. "So those guys that are stepping in and their minutes are gonna increase, they’ve got to find ways to help — whether they create shots for other people, whether it’s the shots for them, the defensive floor they take the challenges. It’s gonna be everybody that’s gotta contribute a little bit more. The guys who are taking those minutes and then the guys who are playing [already] as well. They’re gonna have to find a way to help us more as well.”

It’s also an awful break for Sexton, who entered the season in a contract year after the Cavs front office and his representation didn’t come to terms on a rookie-max extension agreement. And even with that not going his way, he’s been bought-in from the start of training camp around the team’s massive change in playstyle.

So what’s next for Bickerstaff and company? Well, luckily the team has been on a roll with just about everybody contributing. Standout rookie Evan Mobley is showing us something new every night, and Allen just won the NBA Eastern Conference Player of the Week award for the first time in franchise history since LeBron James in the 2018 season. Those guys feast in the paint on both ends, particularly as stifling defenders and versatile weapons offensively.

The Cavs are still waiting for Isaac Okoro to come back from a hamstring injury that’s been ailing him. This could be an opportunity for last year’s first-round pick to flourish as a 2-guard, depending on how the coaching staff wants to utilize him. Remember, he was showcasing an ability to play-make in Las Vegas at summer league. It also helps that Cleveland believes shooting guard is the best position suited for Okoro.

Ricky Rubio is the obvious candidate to see a bump in minutes. After a ridiculous career night at Madison Square Garden, we’re set to see more lineups featuring him and Darius Garland together. Those two have thrived as a combination this season with a plus-15.8 net rating, constantly moving the ball and finding the bigs. In addition, a bigger leap will have to come from Garland, who has already displayed a willingness to take on more of a scoring load in addition to his ability to set guys up. Bickerstaff said Tuesday that Garland's usage rate will increase with more opportunities to facilitate and take more shots, so expect more pull-up threes from the third-year maestro.

Dylan Windler has shown his ability to stretch the floor and run around like a madman, keeping defenses honest with his outside shooting and overall activity on either end. Bickerstaff senses with the recent reps he's gotten that Windler is getting more comfortable. Cedi Osman will likely continue to see more time as well, as he’s enjoyed a career season shooting the basketball and thrived in his role. The Turkish swingman is not only knocking down a career-best 45.3% of his triples, but also hustling as a defender — particularly getting back to defend fastbreaks.

Remember too that, despite being frontcourt players, Lauri Markkanen and Kevin Love have been sidelined in the league’s health and safety protocols. When those two return, Cleveland will have options and keep sending out those big-man lineups. There are weapons all around for this group to use, and every night it can be somebody different to step up to the challenge.

Losing Sexton hurts the Cavs and the man himself in more ways than one. With that said, considering the way Cleveland is playing right now, it doesn’t feel like the drop-off will be as severe as it may have been in the past.

“It’s just gonna come down to us sharing the ball, playing more together as a team," Allen said. "Not saying we didn’t before that, but now that certain level of scoring and a certain level of our reliance on him to close-out games like that, we’re gonna have to come together more as a team and step up."

Anthony Davis will not play Sunday vs. Heat
26 min