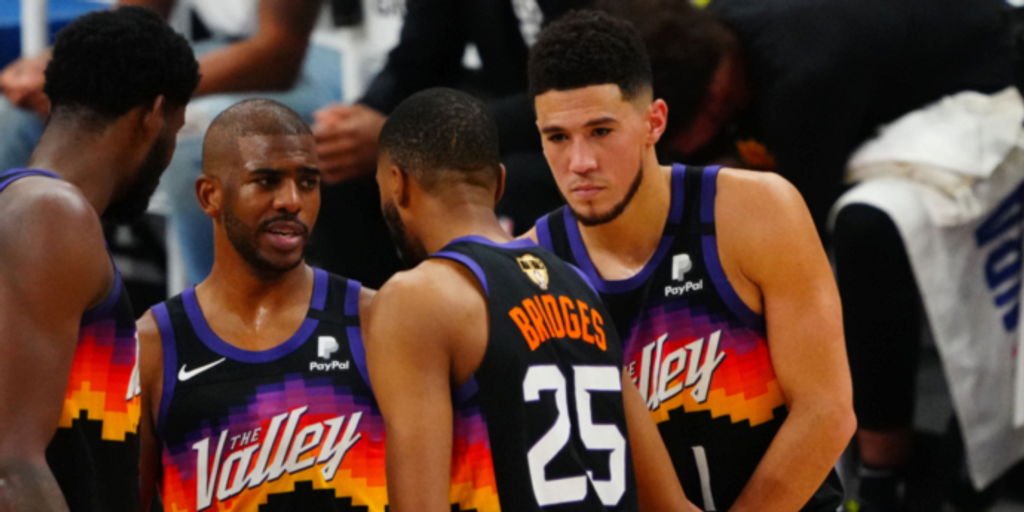 When Chris Paul signed a 4-year, $120 million extension with the Phoenix Suns, many outside The Valley looked around in bewilderment.

Yes, you read that correctly, but the value of Paul with the Suns goes well beyond on-court metrics. Paul’s leadership and holding others accountable helped cement Phoenix into an instant contender last year in the loaded Western Conference. It reached an immediate goal that many felt was unrealistic, an NBA Finals berth. This was Paul’s first taste of a Finals run this deep into his illustrious career, plus the Suns had missed the playoffs for 11 years prior to his arrival. The marriage and instant chemistry between Paul and the Suns led to a seamless, easy negotiation regarding a new deal after the team's disappointing Finals collapse against the Milwaukee Bucks.

However, it should be noted that Paul isn’t exactly locked-in for $120 million in guaranteed money. Suns general James Jones, who served in the NBPA with Paul during their playing careers, gave his team multiple opportunities for a potential out down the road if Paul’s age eventually reaches a cliff. The final two years of Paul’s contract are not fully guaranteed. In 2023-24, only half of Paul’s salary is on the Phoenix books. The following season, the last in Paul’s newly inked contract, it’s all non-guaranteed. Protection is in place for the Suns not to cripple themselves in case father time beats Paul before he reaches age-40.

At this rate, though, it’s hard to imagine someone like Paul ever reaching that proverbial cliff anytime soon. Paul is the NBA’s version of Tom Brady, continuously evolving his game and aging like fine wine. Paul, the wine connoisseur himself, would nod to that comparison.

So far in the 2021-22 campaign, where the Suns have won five games in a row to reach 6-3 in the early portion of their schedule, Paul is teasing the next stage of his career where the burden is taken off his shoulders rather significantly.

Paul chose Phoenix mainly because of Devin Booker, who is only 25 years old and still a few years away from his prime. Deandre Ayton, the Suns’ No. 1 overall pick from the 2018 NBA Draft, continues to develop into a reliable two-way big who has been empowered by Paul. Mikal Bridges is also turning the corner as one of the most versatile two-way wings in the Association. With those three pieces to the puzzle, Paul knows what’s next for him. It’s time to take a backseat offensively and let the young core cook. Booker, Ayton and Bridges will allow Paul to age gracefully as he inches closer to 40 over the span of his new deal.

Say hello to the new model of CP3: the third or fourth scoring option who pulls off wizardry as a special on-ball playmaker. There’s a reason why Paul has been referred to as “The Point God” for a decade now. Now, we’re seeing that optimized version late in his career, leading a loaded young core in The Valley.

Paul is averaging 13.2 points, 11.3 assists, 4.4 rebounds and 2.3 steals while carrying a 58.9% True Shooting percentage. In the scoring department, Paul is averaging a career-low by over two points (15.6 in 2018-19 alongside James Harden). Another intriguing angle of Paul’s offensive metamorphosis is his career-low in field goal attempts at 9.6 per game. This is Paul’s lowest amount in over a decade (2010-11 with 11.6 FGA). Overall, Paul’s usage rate has dipped multiple percentage points to another career-low at 18.4%.

The role for Paul is simple, yet so deadly for opposing teams: Run the show at point guard with flawless precision, hit open three-point opportunities and take over the game only when it’s absolutely necessary. The early results have provided flawless data for the Suns, as Paul is spoon-feeding easy looks by spraying the basketball around like Brady is for the Tampa Bay Buccaneers. Meanwhile, Paul is hitting those catch-and-shoot threes at an incredible clip of 50% (3-of-6). Sure, it’s a small sample size, but it’s a peek behind the curtain of what’s next in the evolution of one of the best point guards in NBA history.

Placed within a more simplified role, it’s a best-case scenario for both player and team. Paul taking a backseat allows Booker, Bridges and Ayton to take the next steps forward. Easing up off the offensive gas pedal will also extend the Hall-of-Fame career of Paul as well.

The Suns are finding an amazing rhythm right now, which is in large part to Paul’s scaled-back role early on. Once Ayton returns to the lineup from a leg contusion later this week, Paul will likely step into the No. 4 scoring option for the first time ever.

There’s a popular meme on Twitter for years now from Teenage Mutant Ninja Turtles, where Splinter holds the hands and walks away with the small turtles. The image below shows the grown-up ninja turtles walking alongside an older Splinter.

This is the situation unfolding now in Phoenix. Paul immediately helped propel the Suns to heights they haven’t reached since 1993 last season. Now, we’re already seeing the next chapter where the young core of Booker, Ayton and Bridges grow up and walk alongside their Hall-of-Fame point guard, and continue their run of sustained success over the next four years.