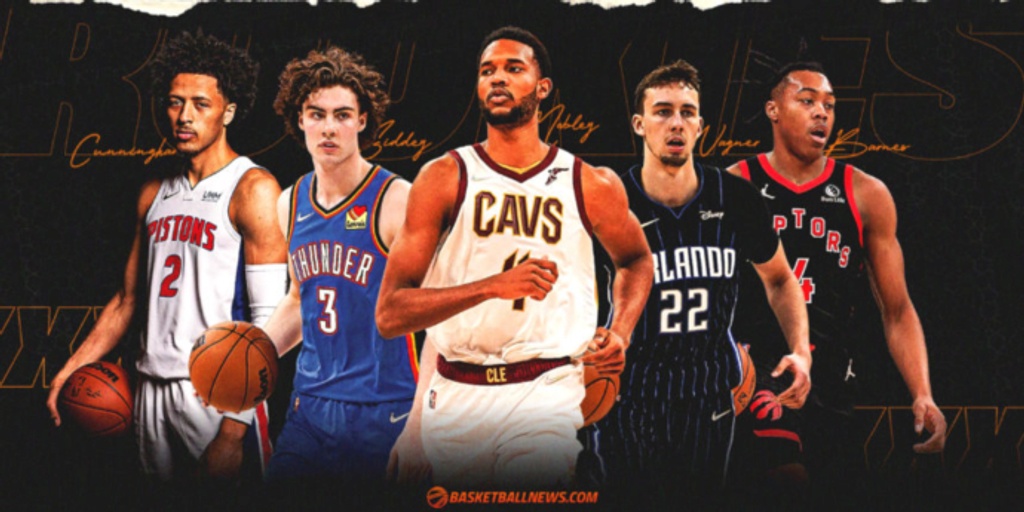 Why they are all special: A guide to the top-five NBA rookies

The NBA rookie class of 2021 has been as advertised and then some, garnering comparisons to some of the more memorable draft classes of the 21st century. From Josh Giddey’s breathtaking passing to Herbert Jones’ suffocating defense to Jalen Green’s gravity-defying levitation abilities, this group is filled with future top-50-caliber talent.

I myself have had the privilege of intimately familiarizing myself with ~ arguably ~ the five rookies who have the highest ceilings of them all: Scottie Barnes, Josh Giddey, Evan Mobley, Cade Cunningham and Franz Wagner.

However, even with all of the insight I gathered on these five rookies, it can only scratch the surface of what their respective games entail. So, to help us sort out where each of these players stands in comparison to their peers, I enlisted help. Our BasketballNews.com staff members and one reporter who covers each team that these rookies play for helped us for this exercise to determine which promising rookie shines brightest in a class loaded with stars.

(Note: For each player, I have included their stats, average ranking from our BBN staff, an argument for why they will be the best of their class and their most notable on-court skill.)

Now, without further ado, here is your guide to the best rookies in the 2021 NBA Draft class.

Why Wagner is the best of the 2021 class: "Never once thought to be someone who could be in the running for Rookie of the Year, Franz Wagner has exceeded all Year 1 expectations with almost no holes in his game, and while already being a positive player with efficient volume stats.

"Offensively, Wagner can use a variety of moves to get to the rim, and after using multiple moves to get to his spots, he can finish over defenders at or near the rim in another set in a variety of ways — whether it be via a runner, sweeping hook or an acrobatic finish. On top of that, when Wagner drives, he sees the floor well and can find teammates at any spot on the floor. Lastly, his three-point shot has been much better than expected, going from being known for airballing a three in the NCAA Tournament to routinely hitting stepback threes over defenders.

"Combine the offensive prowess with his stable defensive performances every game, and the Magic have a clear budding star on their hands. As his volume progresses and Orlando starts winning more games as it progresses through a rebuild, look for Wagner to be the X-factor in an accelerated rebuild and a key piece behind many hopeful future playoff runs.

"Wagner becomes the best player in the draft if he ultimately hits 20.0 points per game consistently, which is only a rough 4.0 point-ger-game jump from his current rookie-year volume while maintaining his efficiency. If he does that while leading the Magic to winning seasons, he will be a certified star in the NBA."

I bet you didn't know that Franz Wagner is in the 94th percentile in cutting.

Don't blink, he just might slip past you. pic.twitter.com/vYuToXWPu7

Why Giddey is the best of the 2021 class: “A 6-foot-8 reactive, decision-making guard who can anticipate a play before it happens doesn't come along too often. Giddey's ability to manipulate defenses, throw passes into space and use his length to create passing angles is what has already made him one of the best young playmakers in the NBA; he's on pace to be one of the best, if not the best, in the NBA one day.

"While it has been a weak point in his game, Giddey has shown some self-creation flashes largely due to his ability to utilize his size when driving to the basket, where he ranks among the top-five for rookies in drive field-goal percentage. Giddey's shooting potential is intriguing as well. While the numbers do not look good, he has some of the tools — proprioception, touch (which can be seen in his floaters) and hand-eye coordination — that would lead you to believe that he can improve as a shooter.

"Giddey's high feel and court-mapping has made up for his lack of shooting, and has led to him being an effective off-ball player — his ability to cut during the perfect moment, ability to relocate or being used in different off-ball actions such as Miami to get him running downhill.

"Giddey's path to becoming the best player in the draft isn't as clear cut as others, but with the Thunder's plan of putting the ball in his hands like in the month of February (16.3 points, 7.7 assists, 8.4 rebounds) gives him a real chance of being one of the few players who can average 20, 8 and 8 while being one of the best playmakers in the NBA."

I've said it once, and I'll say it again:

The greatest passing 19-year-old of all time. pic.twitter.com/IFDpNrsmNH

Why Barnes is the best of the 2021 class: “The case for Scottie Barnes as the best rookie relies on operating in the known and the unknown when it’s convenient. The known? Barnes can isolate and score in the NBA, and generates heaps of his own offense through that, transition and eating glass on the offensive end. The jumper has been inconsistent, but miles better than expected.

"The unknown? The defense. He’s underwhelmed on that end in his rookie season, as many do, but Jaren Jackson Jr.’s ascension to Defensive Player of the Year consideration is a similar case you would make for Barnes. There are glimpses of a back-line sweeper who can give you lots of options in court coverage and step out on scoring wings now and again. He’s put together games where he’s stood out as the best defender on the court while sharing it with All-Defense talent.

"That’s the marriage of skills you’re looking for when you want to project the top end of Barnes’ game — a player who emulates the self-determining offense of star guards and wings, while also being able to provide all the passively excellent rim-running, glass-eating qualities of a big on offense. And on the other side of the floor, it allows you to center him in a lot of different and dynamic defensive schemes.

"So? You do what all optimists do: Operate with the belief that Barnes will make good on his All-Defense potential, and this will couple together beautifully with his burgeoning offensive game. A player who amalgamates the defensive impact of a big, while also giving you the go-get-me a-bucket confidence of many guard and wing initiators is a hell of a thing to behold. He might be that guy.”

No player on the Raptors has corralled more offensive rebounds than Scottie Barnes.

He's absolutely feasting on the glass this year. pic.twitter.com/s9Rzmm46zC

Why Cunningham is the best of the 2021 class: “Will Cade Cunningham be the best scorer in this draft class? Maybe not. Will he be the best rebounder or defender? Not likely. He may even end up not averaging the most assists, thanks to Josh Giddey. So, if there is a world where he isn’t going to be the 'best' in any particular area, how can I make an argument that he will be the best player in this class? Because what will make Cunningham special is not the 'wow' plays, highlight dunks/passes or 40-point outbursts. It is the fact that Cade has/can/will contribute to his team's success in every way you can imagine.

"While there is a world where he doesn’t end up being the best scorer, he currently is tied for first among rookies with 15.6 points per game, on shooting numbers far lower than what you'd expect of him for the rest of his career. While Giddey sure looks like the guy more likely to lead this class in assists, Cade sits just one assist per game behind him. I doubt Cade ends up being the best rebounder in the class, but he sits No. 7 in that stat as well. And while he will never be the defensive force Evan Mobley is, the kid is invested on that end and has the high-level basketball IQ to be a plus defender in the league.

"But what makes Cunningham the most special, you ask? Maturity, toughness, self-awareness and growth. No other rookie in this class has been tasked with being the absolute face of their franchise in the way that Cade has, and he has answered the bell in every way. He says the right things, does the right things and has stolen the hearts of the Pistons' community. And on the court, he demonstrates the toughness that is being a Detroit Piston. It’s not just the physical plays where he lays his body on the line or dives for a loose ball, but it's the mental toughness he consistently shows. There are countless examples of his unwavering confidence and ability to sense the moment and play through a shooting slump, tough start to a game or foul trouble.

"This entire package is why I love to say that Cade Cunningham has absolutely been 'as advertised,' and that advertisement sells you on him being the best player in this class!"

Per Cleaning the Glass. pic.twitter.com/EgsV36DABG

Why Mobley is the best of the 2021 class: “What Evan Mobley has compared to the rest of his draft classmates is that he's on a playoff contender while others, sadly, aren't. The thing is, Cleveland wouldn't be in this position if it weren't for Mobley already looking like a seasoned NBA player in his first year.

"Sure, the defensive impact is already there — that was to be expected. He's paired beautifully alongside Jarrett Allen, and made the Cavaliers into a top-10 team defensively on the interior. But, it's more than just defense when it comes to Mobley's impact.

"Mobley's playmaking and advanced understanding of the game is unprecedented, and it's unlocked a lot of things on offense for Cleveland. He's starting to show more confidence as a shooter, and that in and of itself is also encouraging. It's a bit of a cliche, but more than anything, Mobley just makes winning plays, and he raises the floor of this Cavaliers squad from a bottom feeder to a playoff threat.

"The expectations were high, but this isn't what everyone thought they'd get from Mobley in his rookie season. It's exciting to think where his game will take him next. The sky's the limit."

This season, Evan Mobley is fourth among the 25 big players categorized as "Anchor Bigs" in Defensive Versatility (minimum 700 minutes played).

It looks like Evan Mobley just barely eeks out a first-place finish against the equally-impressive Cade Cunningham (to see how the staff voted, check out the chart below). However, even with all the input we received, our conclusion is far from the end-all be-all. Each of these five rookies possesses the tools necessary to go down as the best of the bunch. And whoever that ends up being will likely be a perennial All-NBA caliber player.

I encourage each of you to take some time to become more familiar with each of these players. They will undoubtedly play a large role in writing the next few chapters of NBA history — potentially even joining the top-100, when the time comes.

Here is a thread of some great writing done on these five players this season:

Also, along with the thread of my work, I wanted to share some of the best-written work done on Giddey, Barnes, Mobley, Cunningham, and Wagner so far this season.

Please feel free to share anything you think I missed!!