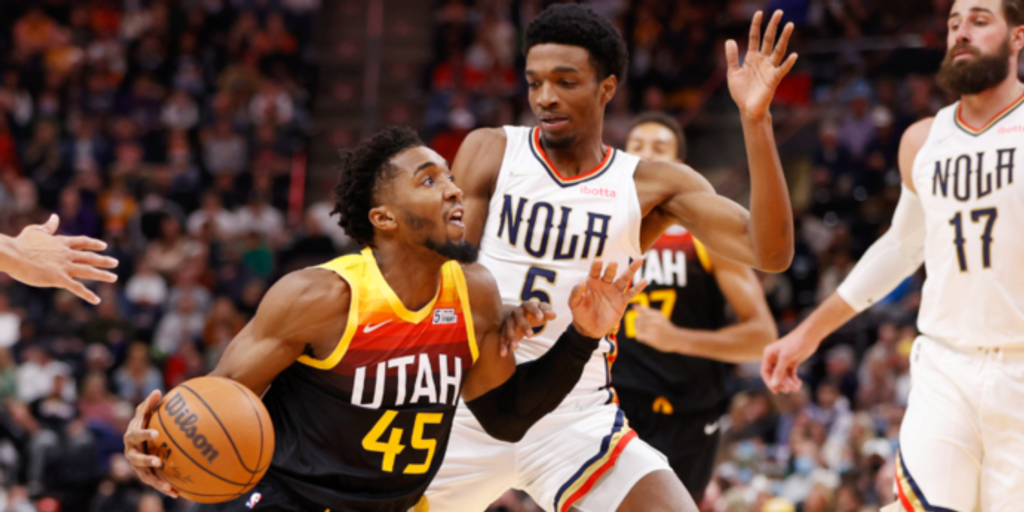 Herb Jones is already one of the NBA's elite wing defenders

The New Orleans Pelicans spent the first third of their season languishing at the bottom of the NBA ladder. They opened the schedule 1-13, and hit Thanksgiving at 4-17 with some of the worst leaguewide efficiency ratings on both ends of the floor.

Then, a switch flipped. The Pelicans are 11-9 since Nov. 24 before the mini-break and have grinded out victories against some of the NBA's top teams without their top player in Zion Williamson. It's no coincidence that in those 20 games, they reinserted one Herb Jones into the starting lineup.

Jones has been nothing short of a revelation as a rookie second-round pick. He'd be a lock for All-Rookie First Team honors if this 2021 class wasn't so dang stacked. Let's move beyond rookie talk though. The 23-year-old has already cemented himself as New Orleans' go-to defender, and three months into his pro career, he's been one of the better wing-stoppers in the entire NBA.

In this 20-game stretch, Jones is tied for fourth in the league (min. 10 games played) with 1.8 steals per game and fifth with 3.3 deflections per game. He has a seven-foot wingspan that he uses to its full potential, jumping passing lanes with his head on a swivel.

It isn't just about his length; plenty of today's NBA players have that. Jones also possesses a relentless motor and quick processing of the opposing offense. Watch this one play in particular, where he sees a Rockets play designed for Garrison Mathews. Jones recognizes it and can switch from his own assignment in time to get the steal:

Per Cleaning the Glass, Jones is one of six players with steal and block rates of at least 2.0% in at least 500 minutes of action. The others are: Draymond Green, Robert Covington, Matisse Thybulle, Andre Drummond and fellow rookie Alperen Sengun. He's also averaging 3.1 fouls per game, which is a completely reasonable number for such an active and valuable defender.

He gets those blocks partially from being a fantastic help defender. Jones has a quick first step on defense and can jump in front of a driver or shooter, but also has the body control to contest without fouling. If he gets beat or pinned on a screen, Jones can use his length and long strides to make some amazing recoveries. Look at these blocks:

Perhaps the biggest sign of his importance, though, comes with his on-ball matchups. Jones is asked to guard some of the best scorers on the planet — on any given night, across all positions. He's recently been the primary defender for Devin Booker, Damian Lillard, Jrue Holiday, Shai Gilgeous-Alexander, Donovan Mitchell and Andrew Wiggins, while switching onto both guards and bigs.

It's been mostly great. Jones can mirror the opponent's movements well and force them into a tough look. If we're nitpicking, maybe he could improve his lateral movement; Mitchell was able to shake-and-bake him for a couple of buckets recently. But if we're nitpicking a 23-year-old, No. 35 overall pick for not locking down an All-World scorer? That's a great sign.

The BBall Index has created metrics to track defenders' positional versatility and matchup difficulty. Among players who have logged at least 500 minutes, Jones is one of 27 players in the 90th percentile of both categories. He is third among those players in the site's defensive impact estimator, D-LEBRON.

We're back on that Herb Jones propaganda train. Here's him getting good positioning and a steal on two of the toughest matchups in the NBA: pic.twitter.com/nHhSxEN2Gw

By all accounts, the rookie's defensive impact is undeniable. He's also improving in his small, specialized role on offense as a spot-up shooter, cutter and ball-mover. Since Nov. 24, Jones is making a solid 65% of his at-rim attempts and 35% of his three-pointers, per Cleaning the Glass. He's a complementary option who is still ironing out the long-range shot (though it has come a long way since college at Alabama), but Jones is a tough finisher and a trustworthy offensive piece.

On the season, New Orleans is 11.4 points per 100 possessions better with Jones on the floor, which ranks in the 90th percentile at his position. He's a notable net positive on both offense and defense.

If I had a vote, I'd stick Jones on an All-Defensive team right now. He's been that good and that impactful for the Pelicans. Either way, New Orleans has found a gem in the second round and an ideal long-term fit next to Brandon Ingram and Zion Williamson.

Get Herb Jones on your radar now before he make your favorite scorer's life a living nightmare.