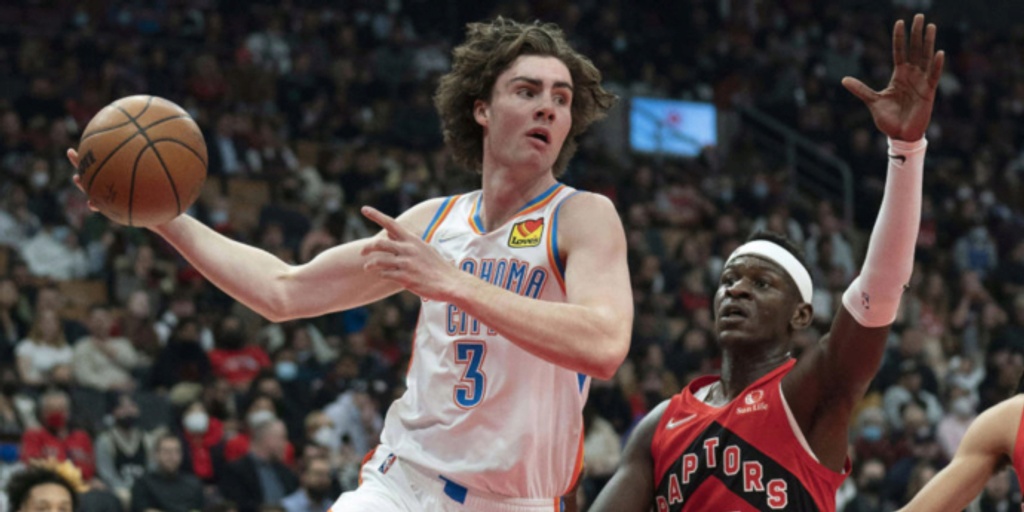 Did the Thunder find lightning in a bottle with Josh Giddey?

Josh Giddey has court vision on par with Ricky Rubio, yet he’s four inches taller. He brings the ball up the floor and acts as the initiator in pick-and-rolls, yet he’s the team’s leading rebounder. He’s only 22 games into his promising young career, yet he may already be the best 19-year-old passer the league has ever seen.

And this isn’t just some cherry-picked stat that illustrates his prowess: Just watch and bear witness to his distributing virtuosity.

Despite his prodigious passing, he still leaves a lot to be desired. He’s shooting just 27.6% from three-point range; he struggles consistently getting to and finishing around the rim; and an awkward frame and slow feet limit his ability to face-up on defense.

This enigmatic set of skills begs an interesting question: What is the ceiling for a player as peculiar as Josh Giddey? Can he be an integral piece of a Presti-led dynasty, or will he end up as collateral damage in a rebuild gone wrong?

As we did with Anthony Edwards, let’s try to answer these questions by looking at five possible developmental outcomes for Giddey. We’ll analyze what would have to take place in order for him to reach each tier and predict which outcome seems most likely.

Also, for each player comparison, I’ve included that player’s peak season in terms of Box Plus/Minus (using the Backpicks version of the stat).

A true deep cut whom only the most diehard of NBA fans will recognize. In all seriousness though, if Giddey doesn’t improve, there’s a chance he could end up as a flash in the pan like this former passing aficionado.

During his prime, Jaric was the rare wing-sized player who could handle the ball, operate the pick-and-roll and make slick finds like in this clip here:

Passes like that were not uncommon for Jaric, who was one of the great facilitators of the mid-2000s, finishing second in the league in passer rating (8.5) in 2004-05.

However, Jaric was out of the league by age-30 because of his poor shooting efficiency (rTS -4.1%), which was primarily caused by his inability to finish at the rim. From 2003 to 2009, except for one outlier season, Jaric never placed above the 24th percentile for his position in finishing accuracy around the rim, per Cleaning the Glass.

Giddey currently ranks in the 21st percentile in that category this season, which is a big reason why he’s shooting 9.1% below the league average in efficiency to start his career.

The one saving grace for Giddey here is that Jaric never really developed a short mid-range game, shooting 33.7% from that area from 2003-2009. In contrast, Giddey is knocking down 46% of those looks this season, which places him in the 74th percentile for his position and gives him the consistent halfcourt scoring device Jaric never had.

For Giddey to become an impactful starter, the Thunder need to stop putting him in situations that expose his weaknesses as a defender.

Too many times this season, he’s been put in positions where he’s had to try and dance with faster players on the perimeter...

...or serve as the last line of defense around the rim because of his size:

Players whose effectiveness comes from their mental attributes rather than their physical attributes are best utilized on defense in an off-ball, free-safety capacity, where they can channel their cerebral instincts to create havoc from the weak side of the floor.

A perfect example of this is Kyle Anderson. The two best BPM finishes of his career came in 2017-18 (2.2) and 2020-21 (3.1); in those seasons, his teams finished third and sixth in the league in defensive efficiency, respectively. Both years, Anderson was surrounded by feisty point-of-attack defenders (like Danny Green, Dejounte Murray and Dillion Brooks) and sturdy rim-protectors (like Jonas Valanciunas and LaMarcus Aldridge), who could shield him from his deficiencies and allow him to focus on his strengths.

During those seasons, Anderson ranked in the 96th and 85th percentile in steal percentage, per Cleaning the Glass, Giddey is only in the 69th percentile this season, but he has the length and awareness necessary to kick it up a notch and be an impactful defender if the Thunder use their treasure chest of draft picks to acquire personnel that enables him to do so.

This comparison is low-hanging fruit if I’ve ever seen it. Both players are Australian, incredible passers, unconventionally athletic and (hopefully) contributors to winning basketball. The only real difference (other than the hair) is that one is currently a far superior shooter.

Joe Ingles tore through several threads of nylon with his shooting last season, and a big reason for this level of efficiency (+11% rTS) was his proficiency as a catch-and-shoot and pull-up three-point shooter.

Of course, Ingles has since transformed himself into a great shooter by developing a consistent and fluid shooting motion:

Giddey’s current shooting mechanics are funky, but Ingles’ case study shows us there’s opportunity for improvement. Such growth is necessary if Giddey wants to become an efficient scorer and top-50 player in the league.

Giddey has already shown the ability to make high-level reads in the pick-and-roll, going downhill on dribble hand-off, or while galloping down the floor in transition (see his passing montage above). But very rarely does he receive the ball on the elbow and operate down there like a passing hub.

That’s where Toni Kukoc comes in.

Kukoc’s ability to make decisions in the mid/high-post was an essential ingredient to the Bulls’ triangle offense during their second three-peat. He could receive the ball and either draw a double-team and find the cutter going toward the basket, or face up his defender, collapse the defense by penetrating towards the rim and kick it to the open man:

Kukoc may have a couple of inches on him, but in today’s small-ball world, Giddey and the Thunder can definitely hunt matchups that allow Giddey to use his size to see over the top of defenders and pinpoint weaknesses in the opposition from that position on the floor.

Kukoc was also a part of five-straight top-six defenses in Chicago from 1993-98, and while he lacked lateral quickness and vertical leaping ability, he made up for it by using his strength to bang with bigger guys in the post:

Giddey would do well in his quest to become an All-Star to schedule some extra weight-room sessions — especially considering he doesn’t have to worry about added muscle taking away from his speed. If he can do that while also occasionally moonlighting as a passing hub, he will be able to scale alongside high-usage ball-handlers and perimeter defenders, like Kukoc did during the second half of the Bulls’ dynasty.

J. Kyle Mann recently described Giddey’s style as “chaotic but purposeful," so who better to compare Giddey to than the master of tamed mayhem himself, Manu Ginobili.

At his best, arguably no one straddled the fine line between chaos and order the way Ginobili did in his prime. There was a certain “calculated recklessness” to his game that made him unlike any player who came before him, and when you look at some of his offensive numbers in an All-NBA season, you see that Giddey has a ways to go to reach Ginobili’s level.

At a glance, the gap between peak-Ginobili and current-day Giddey seems too wide to be closed. Yet the key to Giddey unlocking this tier rests on his ability to emulate one key facet of The Scientist’s game: finishing at the rim.

As it stands, Giddey lacks the ability to soar over defenders or sprint past them, so when he meets larger defenders in the paint, he either gets his shot erased or avoids challenging them entirely:

Ginobili was also slow-footed and definitely wasn’t winning any dunk contests in his prime, so to compensate, he crafted a sophisticated (yet replicable) drive game. One thing he liked to do was take a negative step with his non-pivot foot to give him some added explosiveness on his bull rushes to the rim:

He would also try to throw his defender’s timing off by deploying a bevy of hesitation moves at his disposal:

And he maximized his movement by using his length to elongate his strides. This allowed him to pick up his dribble early and gain control of his body and the basketball to brace himself for contact around the hoop:

His drive game and outside shooting (career 37% shooter on 3.8 attempts) also augmented his playmaking. From 2007 to 2014, Ginobili created between 8.0 and 9.0 open shots for his teammates per 100 possessions, per Backpicks. He would draw the defense’s attention with his scoring and this was especially noticeable in pick-and-roll situations; the defending big would regularly try hedging Ginobili, which temporarily put the Spurs in 4-on-3 situations and led to open shots like this play right here:

Combining Ginobili’s finishing package with the shooting improvements previously discussed would elevate Giddey into a constant advantage creator capable of forcing the defense into rotation and dissecting openings on the floor. That type of player is an All-NBA performer and, more importantly, a heavyweight offensive force on a championship contender.

And that is exactly what I think Josh Giddey will become. I know it’s poor practice to believe a best-case scenario is also the most likely outcome, but Giddey is such an outlier among outliers that an unlikely result only makes sense.

There’s a real argument to be made that at 19 years old, Giddey may already be a better passer (not creator) than Ginobili. And while his drive game needs work, he’s shown flashes of being able to change speeds and lull defenders to sleep, just like Argentina’s Flying Man:

Unicorn players like Ginobili don’t come around often; that’s what makes them special. But when you see a kid like Giddey who surveys the floor with an eagle eye and controls the tempo like a nightclub DJ, it's hard to ignore the fact that he's of a rare breed.

His idiosyncrasies make you believe that he'll overcome the shooting woes; that he'll put on some weight and become a better defender; that he'll harness his full powers as a finisher; and that with the right personnel, he will be the fulcrum of a contender someday in Oklahoma City.