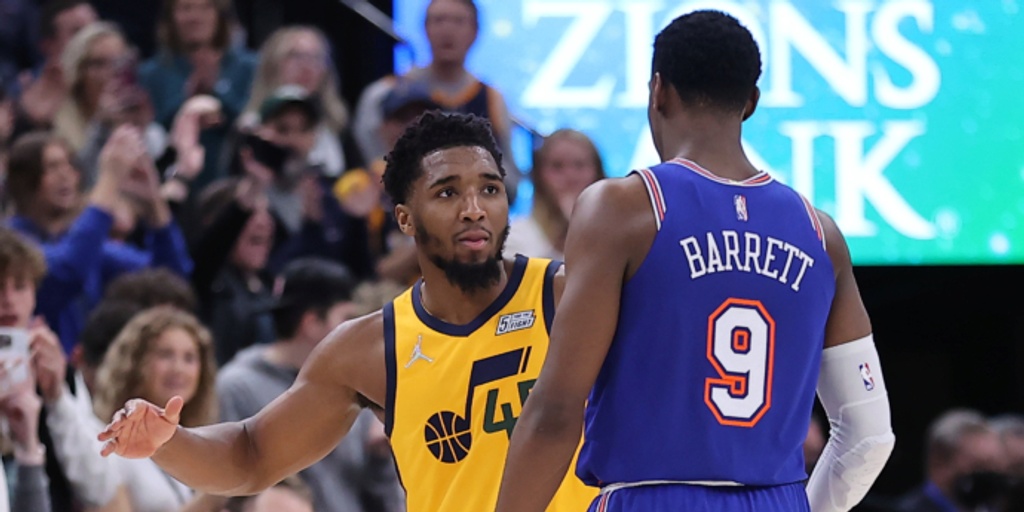 Knicks were wise to step away from Donovan Mitchell sweepstakes

In recent weeks, the New York Knicks seemed to be the frontrunner in the Donovan Mitchell sweepstakes. The Knicks were in advanced talks with the Utah Jazz, and a deal seemed likely. Then, on Thurday, the Cleveland Cavaliers pulled off a blockbuster trade for Mitchell, giving up Collin Sexton, Lauri Markkanen, Ochai Agbaji, three unprotected first-round picks (2025, 2027 and 2029) and two pick swaps (2026 and 2028).

How did the Knicks fail to land their superstar target?

With Mitchell in New York, Madison Square Garden would’ve been buzzing in a way that we haven't seen since Carmelo Anthony first arrived from the Denver Nuggets in 2011. However, looking back on the 'Melo Era, was that blockbuster really worth it in the end? The team never became a legitimate title contender throughout Anthony's tenure.

Mitchell would've instantly become the Knicks’ biggest star since Anthony, but how high would the team's ceiling have been? At best, the Knicks probably would've been a middle-seed in the reloaded Eastern Conference. On paper, here’s what the Knicks’ rotation would’ve looked like had they accepted Utah’s immense asking price:

At best, this feels like maybe a No. 6 seed next season. And with all of the picks that the Knicks would've parted with, it becomes a massive all-in bet that another star would want to join Mitchell in New York over the next few years.

Looking back on the negotiations between New York and Utah, the Knicks may have been saved from themselves in the end. Barrett being the centerpiece of the package is stunning, as it was assumed that he would play a pivotal role alongside Mitchell long-term. Without Barrett, the Knicks were seemingly comfortable betting on a Mitchell/Brunson/Randle trio.

New York's refusal to part with three unprotected first-rounders is why Mitchell didn't land in the Big Apple. The Knicks weren't comfortable matching the price that the Cavaliers ultimately paid — three unprotected first-round picks (2025, 2027, 2029) and two pick swaps (2026 and 2028) — because they knew that the remaining core wouldn’t be enough to seriously compete in the East. New York wanted to save some of their draft picks and young assets for when the next star becomes disgruntled down the road.

Knicks president Leon Rose held firm and didn't give in to Danny Ainge’s demands. In the end, Cavaliers GM Koby Altman swooped in and took advantage, building an underrated powerhouse with long-term sustainability. Cleveland had the infrastructure in place to feel comfortable gambling away their top draft picks through 2029 on Mitchell, who will now be insulated by a formidable defensive duo in Evan Mobley and Jarrett Allen. Darius Garland’s presence at point guard takes pressure off of Mitchell and allows him to focus solely on what he does best.

All in all, Mitchell's on-court fit in Cleveland is perfect — much better than his fit in New York. In the short-term and long-term window, Mitchell has a far better chance of reaching his ceiling within the Cavaliers’ environment versus trying to carry the Knicks’ young core on a team with little flexibility moving forward.

Now, after another failed star pursuit, what's next for New York? They still have the assets to strike whenever the iron becomes hot. Armed with eight first-round picks between 2023 and 2026 thanks to their draft-night trade with the Oklahoma City Thunder, the Knicks still find themselves in a good position even though Mitchell isn’t donning orange and blue.

The long-term answer is staring Rose and Co. right in the face: betting on their young core to take much-needed steps forward, most notably Barrett and Grimes. While head coach Tom Thibodeau may not be a fan of this idea, prioritizing the development of their young core must now take center stage. Allow Barrett, Grimes, Quickley, Toppin and Brunson to play as many minutes together as possible. Moving veterans such as Julius Randle and Evan Fournier would make sense, as they don't seem to fit with this Knicks team. Dealing both for the best offer on the table would clear the runway for the young guys. Having a larger sample size to evaluate will only help New York as they make decisions about their cornerstones.

Will Barrett become an All-Star after signing a four-year, $120-million extension? Can Grimes and Toppin carve out starting spots and thrive in a larger role? As Brunson enters his prime, can he improve the players around him?

At the moment, the Knicks are stuck in the middle, and they've reached a proverbial fork in the road. While the summer-long chase of Mitchell didn't amount to anything, the deal falling apart may have been for the best. If the Knicks actually paid up and matched the Cavs' offer, it’s fair to wonder whether that move would've set the organization back — especially since the team wouldn't have been a contender.

Missing out on Mitchell must sting for the Knicks and their fans. However, they weren’t one big splash away from becoming a formidable contender. Even with Brunson and Mitchell, they would've still been in the market for a third star. Handing over all of their juiciest assets for Mitchell would've hamstrung the Knicks and made it difficult to build a winner around the New York native.