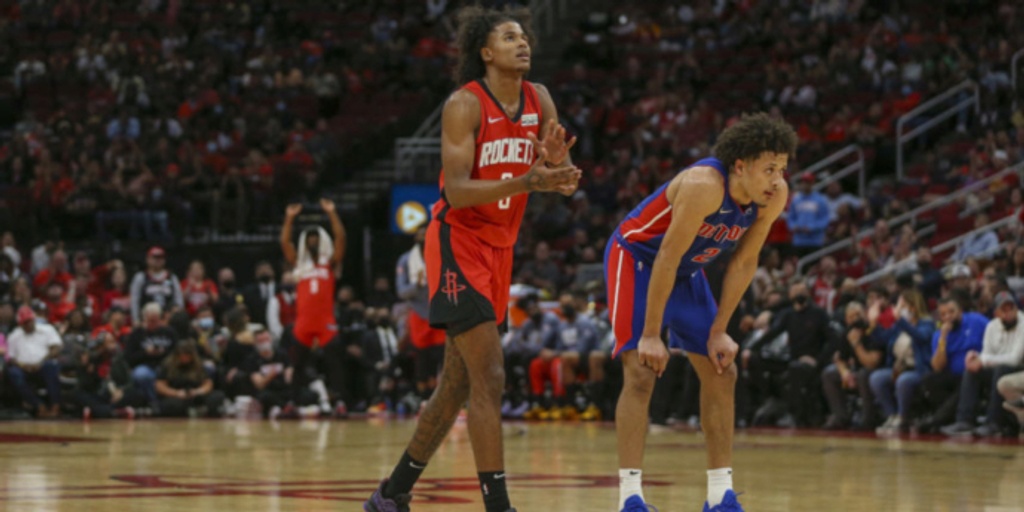 Views from the bottom: What to look forward to from NBA non-contenders

I'd like to get a quick thought off my chest.

Why do we dub the post-All-Star break games as the second half of the NBA season? It's an 82-game season, and every team in the league has played north of 50 games. That's simply not how math works?

Anyway, we are ramping up for the postseason push. As such, most of the storylines will center around the top of each conference. Contender talk, flaws, favorable matchups, buyout targets — all that Jazz.

We'll focus in on the Play-In races. As of now, the Washington WIzards (0.5 games back) and New York Knicks (3.5) are a mini-run away from overtaking the 10th-seeded Atlanta Hawks (or No. 9 Charlotte Hornets) in the Eastern Conference. The San Antonio Spurs (2.0), New Orleans Pelicans (2.0) and Sacramento Kings (3.5) are all within striking distance of the Portland Trail Blazers.

The teams at the bottom — firmly outside of the Play-In race, likely to jostle for better lottery odds — are going to get lost in the grand scheme of things. I get it from a "winning matters/is more fun" perspective, but you'll miss a lot of cool things if you completely disregard those teams.

Remember, for example, that Darius Garland averaged 18.8 points and 6.3 assists with a 57.0% True Shooting percentage after the All-Star break last season before getting shut down. The hints of his growth — slick interior feeds and a more aggressive trigger from deep (40.4% on 5.4 attempts vs. 38.4% on 4.5 attempts before the break) — were present if you peeped those games.

Related: We just watched him in the All-Star game.

Every team at the bottom doesn't have an All-Star in waiting, but this is my plea to keep an eye on them. I'm here to give you a brief guide.

Haliburton serving as the blue-chipper to bring Domantas Sabonis to Sacramento wasn't on my bingo card. The early returns have led to super-charged offenses on both sides, so I'm not sure either team is too upset right now.

On the Haliburton front, he's enjoyed a near-unquestioned run as a primary ball-handler. He's averaging 20.8 points (.519/.452/.813 shooting splits) and 11.0 assists (3.5 turnovers) through his first four games as a Pacer, but even that undersells it a bit.

He has completely transformed how the Pacers play; their pace with Haliburton on the floor is roughly four possessions faster than their regular-season mark (97.95, 20th). You have to take that with a grain of salt — it's been a four-game sample — but watching this team blaze up the floor after misses and makes has been a startling shift.

The heightened pace makes it a little easier for Haliburton create advantages. Against an unset defense, he's able to manipulate his defender into screens, and reads second- and third-level defenders with ease. He's a darn good passer, and his ability to shoot off the dribble — he's converting north of 40% of his pull-up twos (44.1%) and threes (41.7%) this season — makes him a pretty dynamic weapon.

There are some areas of growth present though. He's not particularly bursty, so he does occasionally require a re-screen (or two, or three) against top-notch defenders. His shooting has gotten good enough to where ducking under probably isn't a good idea; he still has some questions to answer against switches though.

Beyond that, keep an eye on how consistently Haliburton accesses the paint. His film is (still) littered with reps where he'll come off the screen and find an outlet once he reaches the free-throw line, versus taking an extra dribble or two in order to engage the big.

No, I mean really fun.

You generally don't get this blend of ball-handling, shooting touch and footwork from a rookie guard. It's easy to get caught up in the aesthetic of this kind of shot creation, but I'm keeping an eye on it.

His shot profile is already wild. To this point, only 69.4% of his threes and 24.7% of his twos have been assisted on. It makes his overall three-point percentage (36.5%) a little more impressive; it also makes his two-point percentage (39.9%) wildly concerning. But hey, I'm interested in seeing if he can leverage his pull-up shooting into cleaner driving lanes.

Porter's transition to point guard was something I wrote about as part of my Something To Prove series before the year. It's worth checking in on that.

Two quick things on that.

For starters, that second section of games is pretty split up due to him being in and out of the lineup. A poor roster context, plus inconsistent burn (in a new role!), is going to lead to some shoddy play.

Second, look at the relationship between assists and turnovers! The dimes are up, the giveaways are down. Beyond the numbers, you could see the gradual progression of Porter's processing.

The simpler reads were (and are) being made more quickly. He isn't as interior-focused, as he's gotten more reps reading the second level. Nearly 46% of Porter's assists have come via threes this season, way up from his 35.6% clip last year.

He's finally looking for the corners! About 14% of his assisted threes came from the corner in his first two seasons; that's up to 22.7% this year.

Hopefully Porter is able to stay healthy so he can continue to get these reps. Even if he doesn't prove to be point guard material, this experience should make him deadlier in a secondary role moving forward.

Stop me if you've seen this scene play out.

Cade Cunningham runs a high ball-screen. His defender either gets caught on the pick, or tries to duck under, but fails to cut off the driving angle. Cunningham gains inside leverage, absorbs a blow, puts up a shot that rolls off the rim, and the play goes the other way.

There are 32 players currently averaging at least 10 drives and 5 field-goal attempts on drives. Cunningham's 1.2 free-throw attempts via drive rank 25th; the players below him on the list:

1) Are point guards, with the exception of Tyler Herro (1.1 FTA)

2) Average fewer attempts at the rim than Cunningham does.

Cunningham has had to figure out how to win with drives — the pace + bump + shoulder nudge seems to be his ideal method of madness. But now he's up against the "rookies don't deserve calls" thing. It's as hilarious (for non-Piston fans) as it is perplexing when watching live.

This possession is going to live in my head for a long time.

This is the Magic attempting to use their talented big-man duo of Wendell Carter Jr. and Mo Bamba together. It's a Double Drag look that flows into another screening action for Bamba to shoot off of.

In theory, opposing bigs should have trouble tracking across screens. It should be a unique way to stress defenses out. Instead, we get LUKA DONCIC playing DROP COVERAGE because he is not at all worried about the initial pop in Double Drag. Even with Doncic eventually fighting over and contesting the shot, the rest of the defense stays at home.

And this, my friends, is the center (you laughed, it's fine) of my intrigue with this group. Defensively, you see the upside. Two very good rim-protectors with enough mobility (especially in Carter's case) to switch up your schemes. Want to go back to the Chicago Bulls/Jim Boylen days trap with Carter? That's cool, because Bamba and his tree limbs are behind the action. Want to show Bamba high? That's cool, because Carter can clean up messes too.

But then there's the half-court offense, which is awful in that lineup (83.1) and generally awful with those bigs on the floor together (88.5). While Bamba (34.4% on 3.7 attempts) and Carter (32.1% from 3.6 attempts) are willing shooters from deep, teams don't fear them. They're able to shrink the floor, which is a bit problematic considering Suggs' shooting woes and Anthony's size issue.

I want to see if they can figure the offense out, because they are a joy to watch defensively.