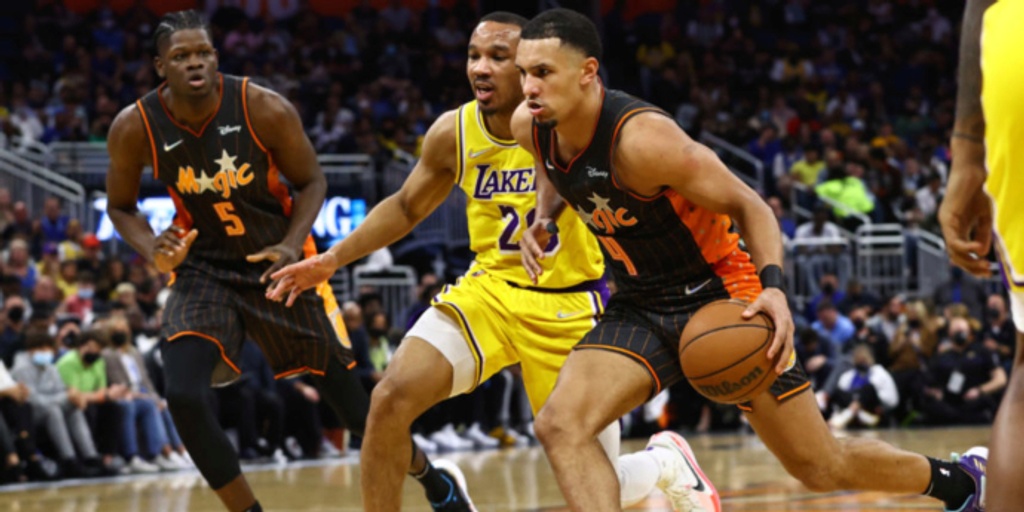 The top of this year's rookie class has been absolutely outrageous.

We've seen Evan Mobley put together a fringe All-Star (and All-Defensive team) case in year one. Scottie Barnes has blown his scoring projections out of the water, and looks like a bonafide star-in-training.

Cade Cunningham shook off a slow start — now he's making wine out of water in a tough context. Franz Wagner showed the goods defensively early on, then proved to be much more scalable offensively than many people thought.

However, two rookies at the top of the board have had shakier-than-expected starts. Jalen Green is the obvious one. The learning curve on both ends — and the flux that roster has been in all season — has been steep. But the flashes have been tantalizing; there may not be five players in the league with a better first step, and it's hard not to believe in his combination of rim pressure and pull-up shooting truly coming together moving forward.

Jalen Suggs is the other. His first 21 games were filled with poor shooting nights and unfortunate turnovers, and that's before he suffered a fractured thumb that sidelined him for over a month.

That, combined with things out of Suggs' control — the controversial-at-the-time Scottie Barnes > Suggs selection looking like a home run for Toronto, plus Wagner flat-out balling in his absence — made it easy for him to slide under the radar.

Suggs is back, though, and has looked pretty solid. He's averaging 15-6-5 over his past five games, showcasing the two-way potential that got him picked in the top-five to begin with.

Offensively, the most encouraging thing to track has been Suggs' growing comfort getting downhill. Before the New Year, Suggs averaged a shade under 10 drives per contest while converting 35.5% of his shot attempts via drive. Since returning, his drives are up, and he's converting over 55% of his shots on drives. This may be surprising, but improving your drive volume and efficiency is typically a good thing.

The volume is up because he's become more determined, more fearless. The efficiency is up because he's using his build to bring the pain versus absorbing it. Shoulder chucks are becoming a more frequent tool in his kit — defenders better hope their chests are ready. He's also been experimenting with more extension finishes against rim protectors.

(The compilation above should give you a general idea, but I'd suggest watching the Magic's recent outing against the Sixers to get the full "Wow, Jalen really isn't scared" experience. Joel Embiid made him look silly a few times, but I appreciate the aggression.)

One of the benefits of Suggs getting more aggressive: his passing is starting to pop a little more on film. His potential assists are up (7.7 to 9.4) if you want to put a number on his progress. From a film perspective, he's hitting — and creating — windows more effectively.

You can see it in pick-and-roll, depending on his partner. If it's another perimeter player (think ghost screens), he's starting to hit his man a little quicker. With a traditional big, he's taking an extra dribble to suck in a defender before making a pass.

There are still warts, of course. Suggs is still trying to find his way as an intermediate scorer. Pull-up twos remain an adventure, and floaters aren't consistent for him yet. As he continues to figure out the rim stuff, having a mid-range counter would be nice to fall back on every once in a while.

The more obvious flag is turnovers, though that's 1) just about every rookie guard in the history of basketball and 2) something that should get better with more reps.

Suggs' turnover tape intrigues me. His passing turnovers are generally of the "Right man, wrong pass" variety. He gets caught in No Man's Land as a jump-passer, but that speaks to the lack of comfort he has in the middle versus any sort of aimlessness with the ball.

The thing to track is his handle. Ball pressure bothers him more than you'd like to see from a top-five pick with #LeadDawg potential. His handle limitations are exposed when he's asked to create in tight spaces.

Defensively, Suggs is a mixed bag right now. Stop me if you've heard that about a rookie before.

He's an interesting case because, unlike most rookie guards, he seems to be more impactful off the ball than on it.

You can see some of the football background come out when he's off the ball. He's a timely rotator, and is beyond his years as a "split the difference" guy on the weakside. As a point of attack guy, his effort is strong. He gets into a ball-handler's jersey. On top of being a strong dude, he also has pretty quick hands. Weak handles are liable to be picked at, literally.

But then a screen comes. And that's where the real fun begins.

For someone as smart as Suggs is, and as good as his effort is, he simply doesn't know how to fight over screens right now. Angle a pick correctly, and he'll swim his way right out of a play. He's much more comfortable going under — ducking, spinning, slithering inside — and meeting the ball-handler on the other side or contesting a shot after finishing his path.

The difference between the two methods are stark, right?

I'd imagine having a guy like Gary Harris as a vet could be a help to Suggs on the screen navigation front. Honestly, with his frame and effort level, he's a couple of "tricks of the trade" away from being solid at the point of attack. I wouldn't be too worried if I were a Magic fan.

I think that's the overall takeaway I have with Suggs, honestly. I just wouldn't be worried about him. The foundation of rim pressure, passing chops and working within the framework of a defensive scheme are there already. Tightening up the handle, the jumper and screen navigation techniques are important, but none of those things are out of reach for Suggs.

Between him and Wagner, the Magic look to have really nailed their draft this past summer.