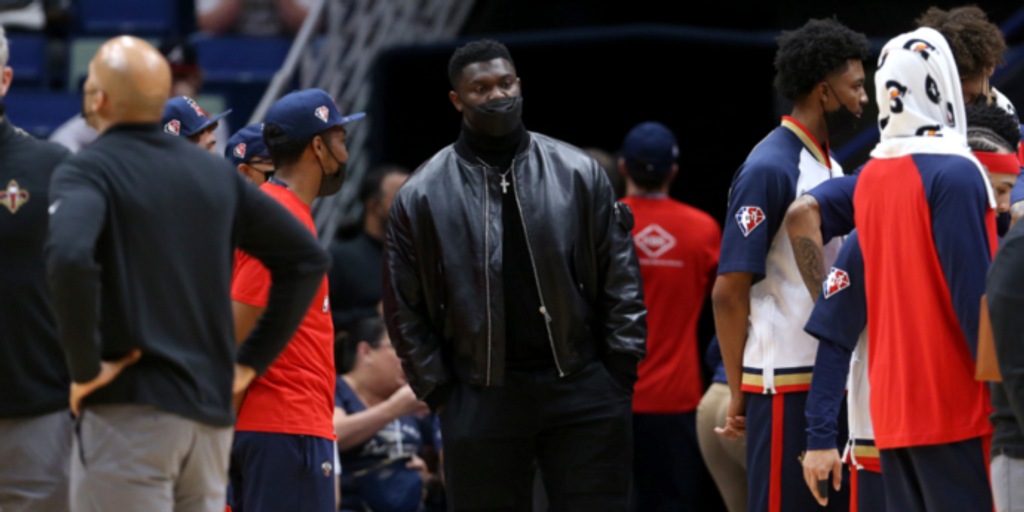 Trasparency lacking, the Zion-Pelicans saga is difficult to read

Every All-Star break, the discourse around the NBA explodes in one way or another without League Pass to fill the void — NBA 75 debates (please, we need to chill about Tony Parker), dunk-contest disappointment, pretty much anything related to Lakers drama, and eventually settling in on Zion Williamson and the New Orleans Pelicans.

CJ McCollum's interview with TNT's Inside the NBA crew absolutely blew up, as it came out that he and Williamson had yet to speak (they have spoken since) after New Orleans traded for McCollum ahead of the trade deadline to bolster its roster.

There's a lot to unpack here in a multitude of layers.

To me, this comes down to transparency from every party involved.

The Pelicans' front office has been... uhhh... lacking in transparency since the start of the season. Here's the thing, though: What else are they supposed to say?

Yeah, we're not that tight with Zion, and he's rehabbing away from the team. We'll let you know when we find out more.

It doesn't work like that. Say something publicly like that, and you risk further alienating your star player.

This consistent approach to injuries has become rather commonplace. For example, the Indiana Pacers have routinely stated that T.J. Warren was hopefully "weeks not months" away from return due to a foot injury, a message they've been giving since media day, and Warren has yet to suit up for a game.

I don't care about the injury report from a betting perspective (although that's becoming a growing topic of intrigue/concern). I just want guys to be healthy. Selfishly, I want to know where a player is at physically so I can properly evaluate a team and have some sort of timetable for a return.

Williamson is rehabbing away from the team in Portland. From a professional standpoint, I get the frustration that he hadn't reached out to McCollum. However, that's part of what's odd to me. He's rehabbing and getting right from a significant injury. He hasn't been around the team and what they're doing day-in and day-out. You can call that bad leadership (not wrong), but at the same time, it's just wonky because... What is he supposed to say?

I would do it differently in the same spot, but I'm not in the same spot. I don't know everything behind the scenes. I don't intend to excuse his lack of reaching out. I think we're past the point of questioning Zion's commitment to the organization, as he's made it pretty clear without stating the obvious in any medium. If Zion were fully committed to this team and their direction, then yes, I'd be entirely perplexed at his not having spoken to McCollum immediately.

This speaks to the larger issue on transparency all around. I don't intend to come off as though I know Williamson's every waking thought, but the rumors and whispers have been out there for some time about his interest in New Orleans. His actions, or lack thereof, have all but solidified the merit to them.

Perhaps I'm being naive to the way that things work, but I just wish we could be more concrete. Much akin to the situation with James Harden wanting to leave Brooklyn, we'd known for a while that The Beard wanted out. The silence was absolutely deafening. Would a direct quote saying, "I don't want to be here anymore," help? I don't know man, but I'd like to think the fallout would've been better without absurd build-up.

Social media and immediate reactions to small chunks of information often foregoing the entirety of the story is a very real factor. An aggregated quote is still something one said, but shedding so much of the nuance and context. In the era of mass communication, actually communicating has somehow become more difficult, and I think we see that on a micro-scale with free agency and trades in the league.

I can't speak on how well Pelicans executive vice president of basketball operations David Griffin has or hasn't connected with Zion, or attempted to. I think some have been a bit too quick to throw the organization under the bus. I haven't abided by every move Griffin has made, but this team is on an upward trajectory.

Read anything from Will Guillory, Christian Clark or Andrew Lopez (three fantastic NOLA beat reporters), and it's so apparent the impact that head coach Willie Green has had on this team. After a disastrous 3-16 start — in part due to missing Zion and one of the hardest early season schedules — New Orleans has gone 20-20.

The turnaround has been drastic. Brandon Ingram has adapted his game, improved as a passer and is now impacting winning at the highest level he ever has. Starting a second-round pick in Herb Jones has paid dividends for this squad, and was an ambitious move early in the year. My only real gripe remains with Garrett Temple's minutes.

Look no further than Nickeil Alexander-Walker and Josh Hart sticking around after being traded to watch one last Pelicans game from the sideline; that just doesn't happen. It sounds cliche, but Green is building something real in New Orleans and impacting the culture in a way that's been palpable much of the year if you've tuned in.

The entire Pelicans squad just went over to say their goodbyes to Josh Hart and Nickeil Alexander-Walker including coach Willie Green. pic.twitter.com/Umy7IlnCZJ

That's my main frustration with this whole situation. This team has a real foundation and footing. I've constantly said to myself "Man, when Zion comes back," while watching this team play. Selfishly, I just want to see it, or at least know if he is or isn't coming back. That's unfortunately overshadowed the really fun and intriguing developments the team has made throughout the year on a national scale.

Building relationships is arguably the most important part of running an organization, but if the star player you drafted with the first overall pick isn't that interested in being there, what are you supposed to do? Yes, it's on Griffin to sell the team to anyone he brings in, but again, he can only do and say so much. At some point, you're just shouting at someone with headphones on.

No, Zion hasn't put the city on his back or fully embraced New Orleans, and in many ways he's done the opposite of what Ja Morant has done in Memphis. That's not to pit them against one another, but when comparing the two situations of small-market teams taking franchise-altering stars back-to-back in the same draft, it's worth noting.

Can we just admit how crazy it is that we're asking someone to come in at 19 years old and be the face of a multi-million dollar franchise? Zion is not wired like Michael Jordan or LeBron James, but that is such a wild standard to set that sheds so much nuance. He gets paid a ridiculous amount of money, but that's not the pressure-release valve we like to paint it as.

This is where one of my larger issues pops up as well. If I were Zion, I'd like to say that I'd go to bat for New Orleans and want to lead the organization that drafted me, but he quite seemingly doesn't want to. I guess I can't entirely fault him for that as a person and his want to be somewhere else.

The everlasting "abolish the draft" calls have come out in force, and I get it. I think we need to transition sports in the United States to a different model, but the point remains that we're not there yet (but please, we can still brainstorm even if we don't have an answer). I don't know a way to allow players to choose wherever they want to go without totally damaging league balance and small markets, but this is another tally on the docket that the draft is inherently flawed. I'd really love to see a shift towards the European soccer model, with a prioritization on youth development and professional organizations down to the grassroots, but again, that would take years to move towards. Talking about it is a start.

Zion Williamson is deserving of some heat for how he's gone about his tenure in New Orleans, as does the front office to a lesser degree. Hopefully, both sides can find a way to to come to terms one way or another and bring at least a modicum of transparency.