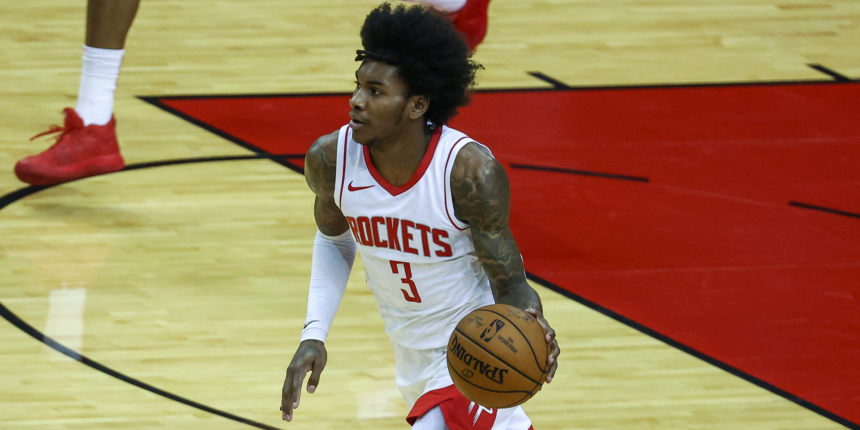 Something To Prove: Kevin Porter Jr. with point guard duties

He's confused. He feels... a bit disrespected. So he decides to go straight to the source, confronting the issue head-on.

"A 77?" Porter asks Ronnie2K on Twitter. "Carry on. You got rookies rank[ed] higher than me? Can you validate that?"

Ronnie2K doesn't budge. "Love KPJ and know the sky is limit but in this specific case… 1 of 82 does not a rating make."

He's right. Well, 72 games were played last season, but the general sentiment is true. One ridiculous game isn't enough to carry a rating. It's worth noting that while the 50-burger was the high point of the season, Porter did take off as a member of the Houston Rockets following his less-than-ideal exit from the Cleveland Cavaliers.

Once John Wall was shut down for the season, Porter got the full-blown reins of the offense. He only had a five-game sample before missing time himself, but he put together stellar averages (21-4-7, 50/38/70) during the stretch that featured — you guessed it — the 50-point, 11-assist masterpiece against the Bucks.

It's one thing for the Rockets to give Porter more burn and responsibility, with or without Wall in the picture. It's another thing entirely to give him point guard duties.

(We can roll with "lead guard" or "primary ball-handler" or "primary initiator" if that's more of your labeling speed.)

Regardless of if he's brought off the bench, bought out or traded, Wall doesn't seem to be part of Houston's long-term future. Those lead reps have to go somewhere, and it's unlikely — in the early goings of the season, at least — that they'll go to rookie sensation Jalen Green.

Porter got a crack at it already. A 26- (or 5-) game sample isn't huge, but it's worth exploring if he can handle the responsibility full-time. In an ideal world, his ability to set the table or scramble the defense early will allow Green to attack bent defenses.

This could serve as a way for the Rockets to kill two birds with one stone: develop Porter as a decision-maker, while bringing Green along in an easier context before building out his decision-making palette.

I don't want to be hyperbolic, but there are... six? Seven? Ten? There can't be many players that are more effective in the art of creating a window for a shot, results be darned, than Porter is. Already.

He's in the Hardenian-mold of setting players up with rhythm dribbles before unleashing combos to get where he wants to go. He's certainly Harden-like in the pure amount of dribbles used; nearly 61% of Porter's shots came after three or more dribbles. That isn't inherently a bad thing, and the highlights are freaking amazing.

What makes Porter infuriating to defend, and excuse me for sounding cliché here, is that you never really have an idea of what he wants to do. He has a wide array of jumpers in his disposal: stepbacks, pull-ups, leaning jumpers, side-steps, turnarounds.

The scary part is that he's comfortable getting to either of those options. When he's on, he's the infuriating MyPlayer you come across in The Rec that jogs down the court, boogies behind a screen for a bit, then makes you wrong no matter how you try to defend it.

Compounding all of that is the fact that Porter is also comfortable going downhill (more on that later). If he catches you leaning at all, he's generating a shot.

That can be for himself, of course. When getting to the rim, Porter isn't afraid of seeking out contact. His footwork is advanced beyond his years, allowing him to Eurostep on a whim, or confuse defenders with off-timing, wrong-foot, and sometimes wrong-hand, finishes.

The encouraging sign, and the reason this article is being written, is that Porter began leveraging his scoring gravity to create for others.

You have to walk before you run, and you have to get down basic passing reads before you can really experiment with the advanced stuff. Porter didn't just begin nailing the basic reads last season; the speed in which he made the reads increased as he got more accustomed to his role.

Give him a 2-v-2, and he'll consistently turn it into a 2-v-1. It's hard not to with his combination of ball-handling, pace (he's really good with deceleration) and footwork. From there, he's able to read the big before making a pass or finishing himself.

Having Christian Wood (returning!) and Kelly Olynyk (off to Detroit) was huge for his development in that regard. A pure 2-v-2 with Wood as his partner allowed him to get important pocket pass/wrap-around/dump-off/entry pass/lob reps with an athletic roller.

A 2-v-2 with Olynyk meant making exterior passes on pick-and-pops. Whether they were operating above the break, or closer to the sidelines (and likely facing ICE coverage), Porter mostly did a solid job of getting the ball out when he drew two defenders.

Advantage creation is the most important trait for a primary ball-handler, and Porter is well on his way to providing it at a high level.

Porter being good at perimeter space creation is a good thing, for obvious reasons. You need late-game, late-clock bailout guys. The Rockets are a ways off from being a playoff team, but with playoff teams generally getting switchier, you need someone that can create on an island when necessary.

Porter makes the hard stuff look easy, but I worry that he doesn't get enough easy stuff. Some of that is roster context; as promising as he is as a player, he has no business being the best perimeter option on a team right now. That's not slander; that's just the downside of being on a rebuilding team.

But a large chunk of it comes down to Porter. He isn't an elite burst guy. That's a minor mark against him, but it matters little thanks to his handle and understanding of pace. The real physical limitation for Porter right now is his strength.

He converted just 53.8% of his shots at the rim in half-court situations, placing him in the 39th percentile via Synergy. While Harden is a stylistic comp, there's a drastic difference between the two as drivers. Even a younger, more-explosive Harden was able to gain inside leverage and shield guys away. Porter doesn't do that consistently right now.

If you're able to get into his body, you can knock him off his spots. Do it early enough, and he'll struggle to get real lift, forcing him into some awkward shots over taller defenders. This is exacerbated by the fact that Porter makes life harder on himself with farther-than-you'd-like launching points and, as mentioned earlier, some of those wrong-foot/hand finishes.

And because Porter is so hard-wired to score right now, he often puts himself into no-win situations if his driving method doesn't work.

Assist totals never tell the full story of a passer — sometimes guys just miss shots — but it's a bit telling that Porter Jr's assist split is so drastic. The split, courtesy of the good folks at PBP Stats:

That is not a typo. Porter racked up eight assists on corner triples. Zoom out and look at the 2-v-3 split, and it's still pretty drastic (106 to 58).

There's context to be added. For the corner issue specifically, you can boil some of it down to scheme. This was a Double Drag-heavy (early) offense, and the Rockets did simplify some of Porter's playmaking reads by giving him empty corner actions.

Also, defenses don't want to give up fruitful threes, so in cases where you have a 2-v-1 on the weakside, the guy tasked with "splitting the difference" will often slide to the corner first. Watch Elfrid Payton (pre-rotating to the paint) and RJ Barrett (splitting the difference behind it) on this clip for a quick example.

But go through the film, and it won't take you long to find instances of Porter trying to force a ball inside without even looking for outside help. Missed reads aren't a death sentence, especially for a guy as young (and as new to the role) as Porter is, but he certainly has some work to do.

Decision-making has to be better for Porter if he's going to take on this role full-time. It's widening his horizons as a passer, but also reeling in some of the wild shots. The movement jumpers look sick when he's cooking, but he isn't always cooking.

Nearly 61% of Porter Jr's threes came off-the-dribble, per Second Spectrum tracking data. 70% of those threes came after three or more dribbles, in which he converted 31.9% of those looks. I hate to keep going back to Harden, but he hit those three-or-more-dribble threes at a 35.2% clip on much higher volume.

That he was able to post a near-53% True Shooting percentage (admittedly below average) with that diet, within that roster context, and with that sort of on-ball responsibility as a second year guy, is kind of silly. For his usage rate (20.5 to 25.4) and assist percentage (13.9 to 31.2) to skyrocket from his rookie campaign without a drastic jump in turnover rate (16.7 to 18.2) is encouraging.

I don't think Porter should be clamoring for an 80-plus overall on 2K22. The shot selection and efficiency must be better, as should the decision making as a passer. But there were enough flashes to be excited about.

A full offseason and an infusion of (young) talent should help make life a little easier for him next season.