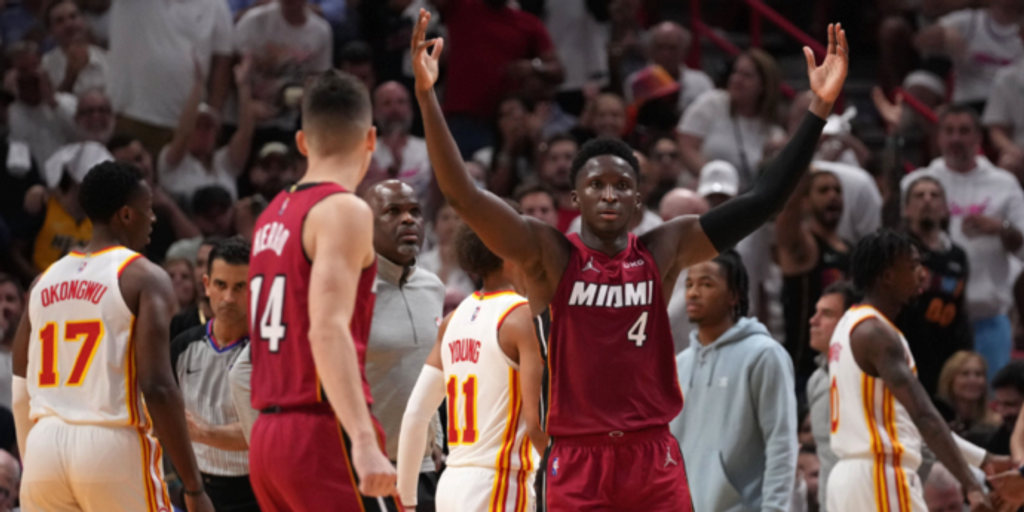 Victor Oladipo has re-entered the chat in Miami

This is why playoff depth matters.

We have a generally simplistic view of what makes a champion. In the NBA, people think that you need multiple stars, with one superstar as the head of the snake, in order to get into the dance. But in the annals of league history, champions haven’t only been littered by the Michael Jordans or LeBron James’ of the world, because even they needed awesome role players and deep rosters to accompany them.

Think about this: We just saw the Brooklyn Nets — among the betting favorites to win the title all-season long — get swept in the first round after playing themselves to the No. 7 seed in the Eastern Conference, despite being led by a 1-2 punch of Kevin Durant and Kyrie Irving.

Why were the Nets favorites all season long? Starrrrr powerrrrr.

Why did they fall flat? A combination of things: A lack of team chemistry, lack of depth, lack of culture, lack of defense, lack of size, lack of versatility and lack of great coaching. Many thought we were just supposed to overlook that because Brooklyn was top-heavy. Granted, the Boston Celtics could end up winning the East, but honestly, the Nets were never who many (of y’all) thought they were.

So why does depth matter in the postseason as rotations shorten? Because rotations don’t need to shorten if you have enough depth to carry you along.

Miami Heat head coach Erik Spoelstra noted this following the team's 97-94 win over the Atlanta Hawks in Game 5, ending the series 4-1 and outscoring Atlanta by 60 points overall across those five games.

“Everybody that played had their fingerprints on this,” Spoelstra said. “We clearly had some adversity in this game not having Kyle [Lowry] or Jimmy [Butler], and our group doesn’t even blink. It’s not even something we have to address. We just pivot, put in the game plan, and everybody just gets ready, tapes their ankles and gets out there and competes.”

In the Heat's case, Lowry was out with a hamstring injury, and Butler didn’t play in Game 5 on Tuesday night because of right knee inflammation. So who started? Victor Oladipo, who didn’t play in Games 1-3 and primarily played in Game 4 because the offense had trouble getting going without Lowry. Vic started in place of Butler — alongside Gabe Vincent, Max Strus, PJ Tucker and Bam Adebayo — to close out the Hawks in a gentleman’s sweep.

“A year ago today, I was waiting for my next surgery,” stated Oladipo, who poured in 23 points, scoring at least 20 in the postseason for the first time since Aug. 24, 2020. “I was sitting in a dark room by myself and just broke down, not because I quit, but because I was at the lowest point I could be at. Now, God has put me in this position today. I made the most of it.”

"I've overcome a lot, so whatever happens next, I'll be ready for it."

Only Butler and Adebayo are averaging over 30 minutes per game this postseason for the Heat, and now 11 guys have seen real rotation minutes across multiple games.

And no other team has someone who can come in out of nowhere, start and do what Oladipo did Tuesday night: 23 points, 3 assists and 3 steals on 6 of 12 shooting (3 of 6 from three) and 4 of 4 on free throws to go along with a 121 Offensive Rating, 9.2 Box Plus-Minus and preventive defense.

Oladipo, per NBA.com’s advanced stats, has put together a plus-29.7 Net Rating in the two playoff games he’s logged minutes in.

“Again, I’m still improving,” he said. “I haven’t played enough basketball to be super comfortable yet but I’m getting there... I have no doubt I can surpass that level I was at. Even better days than that to come. This is part of the journey of getting there.”

Specifically on his progress, Spoelstra spoke of his adulation for Oladipo.

“I really admire him, I do," Spoelstra said. "For this journey, really, for the last three seasons, where he’s been dealing with injuries and frustration, and then really working to make himself available for us without a guarantee to play. And then just giving to the team. That’s why everybody roots for him, and he always comes in with a smile on his face, and lifts people up, and that’s even when he was going through DNP’s. But he worked, he prepared, and it’s true, crazy things happen, and there’s a karma to it.

"If you do the right things and stay patient, it might not be on your terms or your timeline, but then, when your opportunity is there, you’re able to take advantage of it, and then you have everybody enjoying his success.”

And, to those who bought into that Sk*p B*yless “report” about friction between Butler and Oladipo, Vic acknowledged that: “Jimmy helped me tremendously in the fourth quarter.”

Oladipo, as was written two months ago, raises this team’s ceiling. If Duncan Robinson isn’t hitting threes, Oladipo can create dribble penetration for others to get open looks. If Caleb Martin is making too many defensive mistakes, Oladipo’s there to be another versatile stopper who can keep up at the point of attack. And if the overall offense lacks a scoring punch, Oladipo’s there to provide another threat — one who specializes in nothing, but can be effective in everything.

The Lowry-Oladipo-Butler-Tucker-Adebayo “death” lineup is coming at some point, and if Tyler Herro doesn’t get it going soon, it’s one that may finish playoff games more often than we think, assuming Oladipo has earned consistent minutes going forward.

I would never tell Spo how to coach, but in the right spots, more Oladipo the rest of this run seems helpful for a team with title aspirations.