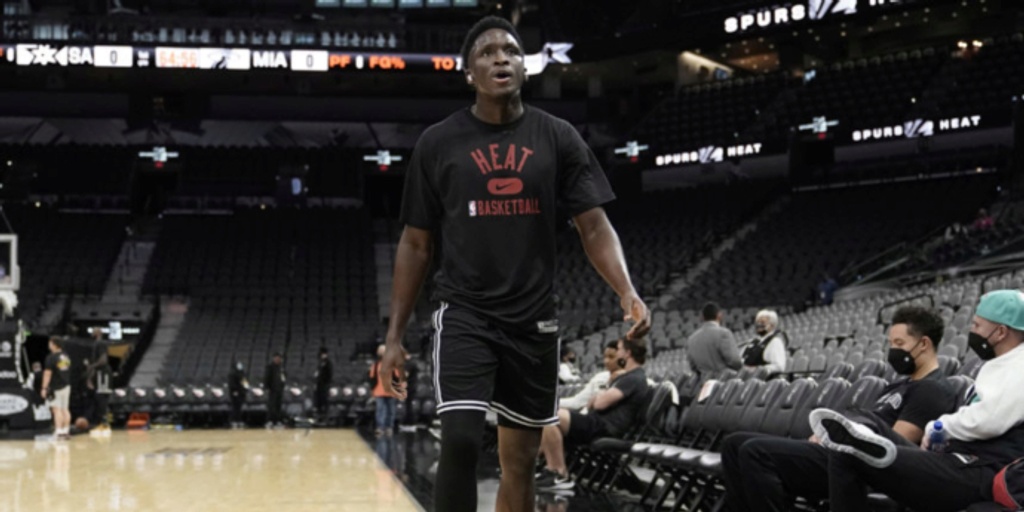 Victor Oladipo is coming: How he can help raise the Heat’s ceiling

The Miami Heat are one of several teams that can legitimately win an NBA championship this season, full stop.

If you’ve watched them at all through objective eyes, you’d likely conclude that they’re somewhere between fringe Eastern-Conference-championship contenders and potential NBA champions if certain things break right.

The Brooklyn Nets, with Kevin Durant, Ben Simmons and Kyrie Irving, might have the most talented trio of the Eastern contenders, but they probably won’t have enough time to establish their chemistry this season — even if Irving could play home games starting now. (Talent is cool, but talent and chemistry wins.)

The Philadelphia Sixers will have Joel Embiid and James Harden, but that will either really work or really won't. The Milwaukee Bucks have championship equity and the best combination of talent, chemistry and two-way basketball between Giannis Antetokounmpo, Jrue Holiday and Khris Middleton, but have just been … weird.

The Boston Celtics have Jayson Tatum and Jaylen Brown without an awesome build around them, but they have an indisputably better team today than this time last week (and they've been excellent over the last month-and-a-half). And the Chicago Bulls, if healthy by the spring, have one of the most balanced starting fives in the league, but have as many ifs as DeMar DeRozan’s had points these last five games. (Okay, not quite.)

Where that lands the Heat is simple — they can get to the NBA Finals, but like their many peers, will need plenty to break right in their favor for reasons that have grown increasingly evident in watching a healthier version of them in recent games. (Having Erik Spoelstra, arguably the best coach in the NBA, also helps.)

The Heat are, again, the workhorse team that could probably get to the highest level defensively among the teams we’re discussing, but have questions relating to their late-game offense. That could ultimately decide their fate.

Jimmy Butler is an elite two-way player, and still one of the most underrated stars in the league in a culture that is increasingly highlight-driven — and Butler isn't known for his highlights. He’s also engineering a Heat offense that really pops for most of the game, but grows stagnant toward the end of close encounters. It’s like a regression to where the team was in the latter portion of Dwyane Wade’s pre-retirement run with the Heat, as Ethan Skolnick noted on last night’s Five On The Floor podcast.

Bam Adebayo would be garnering Defensive Player of the Year attention if not for a thumb injury that sidelined him for several weeks. His offensive aggression or lack thereof (less so as of late) is a never-ending talking point on Heat Twitter, largely because it impacts the team’s championship aspirations in either direction. Tyler Herro is currently the team’s best shot-creator other than Butler, and … well … as well as they do everything else, that component is what’s holding them back from being slam-dunk championship contenders, according to some.

I'm assuming this is the aggressive Bam Adebayo some are looking for. pic.twitter.com/7ukBX5wceG

Enter Victor Oladipo, who is progressing toward a return from surgery, and is practicing with the G League Sioux Falls Skyforce 5-on-5, giving the impression it won’t be long until he makes his 2021-22 season debut. Klay Thompson returned three weeks after his G League stint, for what it’s worth.

Oladipo is immediately walking into a high-pressure situation, and the Heat won’t peg him as their savior, nor should they — but there will come a time when he’ll need to be, for better or worse. We last saw Oladipo play way back on April 8, 2021, around 40 days before the start of the playoffs. What we saw of him last season is hard to gauge because he played 33 games with three separate teams in his first full season back from quad surgery (not including games in the bubble).

The offensive creation wasn’t at an All-Star level, but it was still there. Between stints with the Indiana Pacers, Houston Rockets and four games with the Heat, Oladipo averaged about 20-5-5 and 1.4 steals per game on 41/33/75 shooting splits through 32.7 minutes per contest. The lion's share of minutes came from his stints with the Pacers and rebuilding Rockets, only logging four appearances with the Heat before being sidelined.

With the Heat, he saw 27.8 minutes per contest, averaging 12.0 points, 3.5 rebounds, 3.5 assists and 1.8 steals per contest on just 37/24/67 shooting. Even though this is the definition of small sample-size theater, you still saw glimpses of how he could impact Miami on both ends.

The Miami Herald’s Anthony Chiang reported earlier today that Udonis Haslem – who guarded Oladipo in a viral clip earlier this month – says he looks way better than last year. Usually, people would file that under bullsh*t, but you can call Haslem a liar to his face if you want. I won’t.

“I’ve seen enough to know he’s definitely better than he was last year,” Haslem told the Herald. “I haven’t seen any limping. I haven’t seen a lack of confidence. I haven’t seen everything so I can’t make a fair assessment. He looks pretty [good] about where he’s headed.”

Chiang noted that Oladipo “has been doing more behind the scenes in recent weeks. He traveled with the Heat on recent trips to continue his workouts around the team and has been taking part in rigorous pregame two-on-two sessions with teammates.”

Now, so this doesn’t go on forever, we’ll use Miami’s last two games as examples to show where Oladipo could help solve problems during some worrisome fourth quarters.

Against the Brooklyn Nets, the Heat led 89-68 at one point. The Nets, who were held to 18 points in the third, erupted for 35 in the fourth, coming within one possession of Miami, largely due to [redacted] erupting for 20 of his 29 points late.

1:32 – Irving’s first field goal of note came as a pull-up three at the top of the key with over eight minutes left. Anticipating a screen, Gabe Vincent was slow to contest, and Duncan Robinson was late to cover.

1:45 – He pulled another one. Vincent again drops too far, awarding enough space, and Robinson gets caught behind Patty Mills setting a screen on Vincent.

1:53 – Irving takes Vincent one-on-one, and help is late coming over. Vincent, a high-level on-the-ball defender, just gets beat. It happens.

2:03 – Robinson gets beat one-on-one, and because Butler and Adebayo are worried about each dunker spot being occupied, and PJ Tucker can’t overcommit, otherwise Mills would be nekkid for three, Irving gets to the cup.

2:12 – He gets the angle around a Butler-Robinson double team, beats Robinson with his speed, gathers over Bam’s arm, and floats it over Kyle Lowry. A lot of other 6-foot-3 guards probably don’t make it to Lowry there.

2:23 – He gets a step on Tucker guarding him at the top of the key, and drills a mid-range fadeaway.

Is Oladipo the answer in this setting? That would be unfair so long removed from game action, but you can throw him on Irving here for a couple of different possessions to help give the Heat defense a shot in the arm. At his peak, Dipo was a soul-sangin’ All-Defensive guard, who should at least be a quality defender again, even if he won’t reclaim all-world status soon (if ever).

Now, let's look at the fourth-quarter breakdown, symbolized by the Heat’s loss to the Mavericks last night, in which Miami again squandered a double-digit lead.

For this, it’s simple: 40 second-half points typically won’t get it done, especially when your opposition is wildin’ from three. This could be as simplistic as the Mavs shooting 18-for-41 from three (43.9%) to the Heat’s 7-for-27 (25.9%). But Vincent, who played all 12 fourth-quarter minutes despite having one of his worst outings in recent weeks, probably had minutes last night that would’ve gone to Oladipo or Tyler Herro who was out with an injury (along with Caleb Martin, Markieff Morris and Dewayne Dedmon). Vincent went 0-for-2 in the quarter, both from deep, and had two fouls. Outside of a rebound, he did nothing else offensively. The team in general reverted to a simplistic offense.

Vincent is the guy whom Oladipo will primarily compete with for minutes — last night notwithstanding, he’s been quite a revelation this season considering that he didn’t appear NBA-ready in the two seasons prior.

The path to Oladipo getting minutes is through being a competent shot-creator on offense, and an adequate point-of-attack defender on the other end. The high-end of this would have him finishing games, even over Herro, in a lineup of Lowry-Oladipo-Butler-Tucker-Adebayo — which is attainable, but unrealistic to expect right out the gate. It’s, for now, a dream scenario.

If Dipo’s great, it’ll be a good problem to have for Miami, and it’ll raise their floor, giving them someone who’ll be a top-three shot-creator on the team. So, the Heat don’t need Oladipo to contend, but it’ll sure as hell make a lot of things easier — even as Spo will have to stay up late figuring out these rotations. It’ll also help cover up some of the team's shortcomings otherwise, on both ends of the floor, and that could be Miami’s missing ingredient.