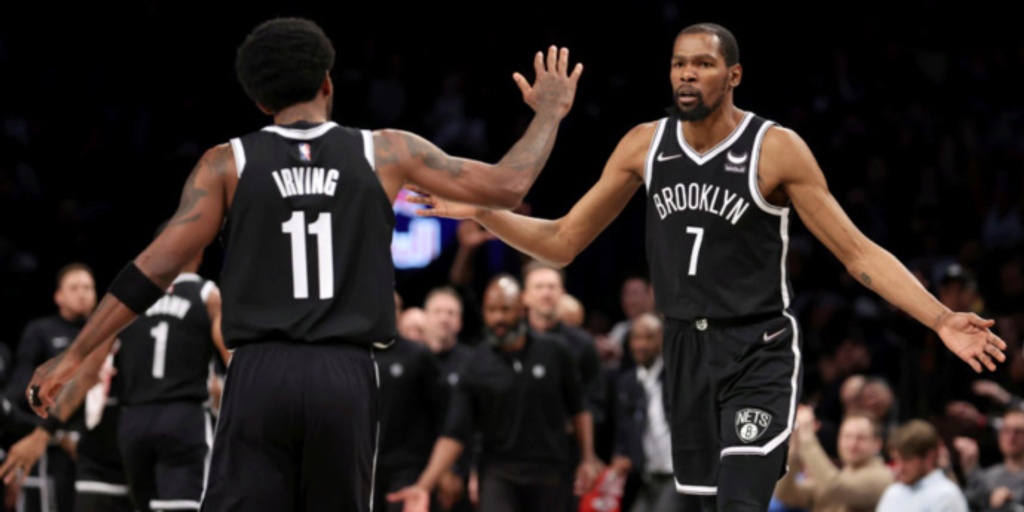 2022 NBA offseason preview: What's next for the Brooklyn Nets?

After everything the Brooklyn Nets went through this season, they still entered the playoffs with the third-best championship odds (+600), which is a testament to this team's talent on paper. However, though they were considered a favorite to hoist the Larry O’Brien trophy and boasted the NBA’s second-highest payroll ($174,811,922), the Nets failed to win a single playoff game.

Multiple players blamed Brooklyn’s lack of continuity. Kevin Durant and Kyrie Irving played just 17 games together this season after playing only 27 games together last year. Irving couldn’t suit up in home games until late March due to New York City’s vaccine mandate. A number of key contributors were acquired halfway through the campaign, including Seth Curry, Andre Drummond and Goran Dragic, making it even tougher for the team to get everyone on the same page.

Injuries also impacted the team’s ability to play at full strength and develop chemistry, as Durant missed 27 games with a sprained MCL, Joe Harris suffered a season-ending ankle injury in November and Ben Simmons dealt with a herniated disc in his back after being traded to Brooklyn as the centerpiece of the James Harden blockbuster.

Now, after being swept by the Boston Celtics on Monday night, what’s next for the Nets?

“This summer is gonna be a very, very important summer for our organization,” Durant said after the Game 4 loss. “We'll see where we go next year."

Durant is correct, as the Nets will be one of the most interesting teams to watch this offseason, and it’s possible that their roster could look very different entering the 2022-23 season.

The Nets have only six players with guaranteed contracts for next season: Durant, Simmons, Harris, Curry, Cam Thomas and Day'Ron Sharpe. Brooklyn already has $144,555,667 in guaranteed money on their books for 2022-23. Next year’s salary cap is projected to be $122 million and the luxury tax is expected to be $149 million, so they’ll likely have one of the NBA’s most expensive payrolls once again.

The Nets are already close to being a tax-paying team before factoring in any of their potential free agents such as Irving, Drummond, Dragic, Bruce Brown, Patty Mills, Nic Claxton, Blake Griffin, LaMarcus Aldridge, Kessler Edwards and David Duke Jr.

Irving has a player option worth $35,328,700. On Monday night, Irving was asked about his future and said, “I don’t really plan on going anywhere... There's no question where I'm going: I'm here with 7 (Durant)."

Either Irving will opt-in and cost quite a bit, or he’ll opt-out and potentially cost even more if he signs a new, multi-year deal with the Nets.

Mills also has a player option, which is worth $6,184,500. He could opt-in, but it’s also possible that the 33-year-old will prioritize his long-term security and try to ink a multi-year contract elsewhere. He's coming off a productive season, averaging 11.4 points, 2.8 threes and 2.3 assists while shooting 40.0% from three, so he will likely have other suitors.

When asked about the possibility of re-signing with the Nets, Brown responded, “Yeah, hopefully. The season just ended. I’m not thinking about it. If there's a chance to stay, we'll talk about it. But we'll see."

It remains to be seen if Drummond, Dragic, Aldridge and Griffin will return.

Drummond played well as the Nets' starting center, averaging 11.8 points, 10.3 rebounds, 1.4 assists, 1.0 block and 0.9 steals (while shooting 61.0% from the field) in 22.3 minutes per game. When Drummond signed a one-year deal last offseason, it seemed like he wanted to showcase his value and then ink a larger contract this summer, so if he gets the kind of offer he’s anticipating, he’ll likely be too expensive for Brooklyn to retain.

In a shockingly candid moment back in March, Drummond told reporters: "If we're all being honest, I'm only here ‘til the rest of the season. Who knows what’s gonna happen in the offseason? So they need a guy like [Claxton].”

Last season, the NBA world was outraged that a super-team like the Nets was able to add Griffin and Aldridge for nothing via the buyout market, putting them alongside their Big Three of Durant, Irving and Harden. At one point, Brooklyn’s roster had a combined 41 All-Star appearances and 32 All-NBA selections. However, it didn't translate to postseason success. It remains to be seen if Griffin, Aldridge or Dragic will return. It’s possible that Brooklyn will be able to attract other ring-chasing veterans to take their places.

After all, despite their first-round flameout, the Nets will once again enter next season as a top contender. If Simmons is able to return his All-NBA, Defensive-Player-of-the-Year-candidate form, it would be a huge addition that makes the Nets much scarier. And the more Durant and Irving play together, the more dangerous they’ll become as a duo. Also, with Harris and Curry, the Nets will have two outstanding shooters to put around their Big Three. If this team is able to stay healthy and develop chemistry, Brooklyn has the talent to go on a deep postseason run.

When asked specifically about who might be back and what the Nets need to add to their roster in order to contend, Durant shrugged.

"We just got done playing. You know I don't know the answer to that question right now,” Durant said. “I don't know the situations with the contracts. I just don't know. Obviously when you lose in the playoffs, you’re looking toward next year and who may be on the team, and there's a lot of high expectations around the Nets so people want to have some hope of what may happen in the future. But at this point, an hour after the game, it's hard for me to say.”

Another avenue for the Nets to improve is through the 2022 NBA Draft, where they’ll have the No. 23 overall pick via the Philadelphia 76ers. In BasketballNews.com's latest 2022 NBA Mock Draft, Brooklyn is projected to take Jaden Hardy of the G League Ignite with its late-first-round selection.

The Nets can try to find a diamond-in-the-rough with that selection, or they can attempt to trade that pick for a win-now piece. Since the Nets will be above the luxury tax and the rookie will be a relatively cheap contributor, it may make sense to keep the pick. Remember, this year’s roster featured four rookies: Thomas, Sharpe, Edwards and Duke.

While the roster could look very different, don’t expect the Nets to make a coaching change. Steve Nash expressed that he hopes to return as the team’s head coach, and Durant got annoyed and shot down a question about whether Nash is still the right coach to lead the Nets.

“Come on, man. Yeah,” Durant said. “Steve has been dealt a crazy hand the last three years. He’s had to deal with so much stuff as a first-time head coach — trades, injuries, COVID, just a lot of stuff he had to deal with. I’m proud of how he just focused and of his passion for us. We'll all continue developing over the summer and see what happens.”

Durant did express that he wants to have some input over this offseason’s personnel decisions.

“Yeah, of course! I want to know who I'm playing with out on the floor. I want to know what we're thinking,” Durant said. “[Nets general manager] Sean [Marks] and the front office, we all just talk basketball regardless because we all enjoy basketball; sometimes our team may come up and what we need and what I see from a player’s perspective. We always have conversations and that’s what makes great organizations.”

Irving made it clear that he wants to be involved in “managing this franchise” as well.

“When I say I’m here with Kev, it really entails us managing this franchise together alongside [Nets governor] Joe [Tsai], Sean and our group of family members that we have in our locker room and organization,” Irving said.

“It’s not just about me and Kev. We're cornerstones here, but we have Ben and a few other guys who are under contract [too]. I think we've just gotta make some moves this offseason and really talk about it and really be intentional about what we’re building, and have some fun with it and make it enjoyable.”

After a disappointing season, all eyes will be on the Nets to see how their decision-makers attempt to right the ship.

If the last year has been any indication, there won’t be a dull moment.