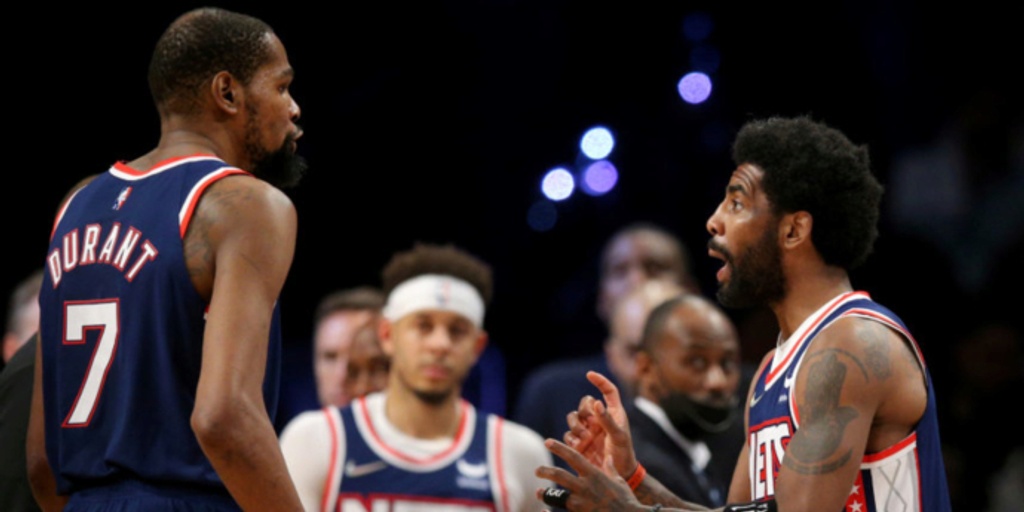 The 2021-22 Nets: Arguably the most disappointing team in NBA history

At around 6:00 pm on Sunday, June 30, 2019, word began to spread that free agents Kevin Durant and Kyrie Irving had decided to team up and join forces in Brooklyn. It was hailed as one of the most important and impactful days in the history of the Nets as a franchise.

Despite the fact that KD was recovering from an Achilles tear, expectations in Brooklyn were sky-high. Euphoric Nets fans were incredibly optimistic, dreaming of the imminent success this dynamic duo would enjoy.

Yet, with both KD and Kyrie sidelined by injury during the 2020 postseason, Brooklyn was swept out of the playoffs by the Toronto Raptors that first year.

Nevertheless, expectations ratcheted up even further once Nets fans watched Durant return fully healthy in 2020-21. And that optimism reached a fever pitch when the team added a third future Hall-of-Famer, James Harden, in mid-January 2021.

However, Kyrie injured his ankle in Game 4 of the Nets' second-round series vs. the Milwaukee Bucks last postseason, and Harden was nursing a hamstring injury that prevented him from playing at full strength. KD put the team on his back and played brilliantly, but the Nets eventually lost Game 7 at home to Giannis Antetokounmpo and the eventual NBA champions.

Still, the team and its fan base were incredibly hopeful heading into the 2021-22 campaign. And for good reason, as KD, Kyrie and Harden were all healthy. Brooklynites were convinced this would be the year their team would advance to the Finals and capture the Larry O'Brien trophy, and sportsbooks in Las Vegas agreed with them, installing the Nets as the heavy preseason favorite to win the NBA title.

Things got off to a rocky start.

Irving decided to reject the advice of medical experts and refused to get vaccinated against COVID-19. As a result, due to New York City vaccine mandates, Irving could not play in home games. Consequently, in early October, Nets general manager Sean Marks and team owner Joe Tsai informed Irving that he couldn't rejoin the team — for games or practices — until he was vaccinated.

"He has a choice to make, and he made his choice," Marks stated. "My job here is to make what we deem as the best choices for the organization moving ahead as a whole... We're looking at putting a group of people that are going to be able to participate fully. That's what this comes down to, and we're not looking for partners that are going to be half-time."

In November, Tsai told the New York Post: "Kyrie talks about it as a sort of personal choice issue, which I respect. But we all need to not forget our goal. A championship team needs to have everybody pulling the same direction."

Even without Irving, the Nets got off to a strong start, winning 21 of their first 29 games. Durant was playing at an MVP level over the first two months of the season, averaging 29.7 points (on 52% shooting), 7.9 rebounds and 5.9 rebounds. Brooklyn had the best record in the Eastern Conference through the first 30 games of the 2021-22 campaign.

However, in mid-December, a COVID outbreak decimated the Nets' depth. Durant, Harden De'Andre Bembry, Bruce Brown, Jevon Carter, LaMarcus Aldridge, James Johnson and Paul Millsap were all placed in health and safety protocols. Unnerved, the Nets front office relented and decided to welcome Irving back to the team.

With KD, Kyrie and Harden reunited, NBA pundits and oddsmakers once again predicted Brooklyn's immense collection of talent would carry them to a title.

However, the Nets' Big Three never seemed to get on the same page. In a Jan. 15 victory over the New Orleans Pelicans, Durant sprained the MCL in his left knee. The injury would sideline KD for six weeks. By late January, rumors began to surface that Harden was fed up with the circus-like atmosphere and wanted out of Brooklyn.

On Feb. 2, Brooklyn was beaten badly by the lowly Sacramento Kings, and Harden's effort (or lack thereof) was appalling. In what would be his final appearance in a Nets uniform, The Beard finished with 4 points on 2 of 12 shooting. 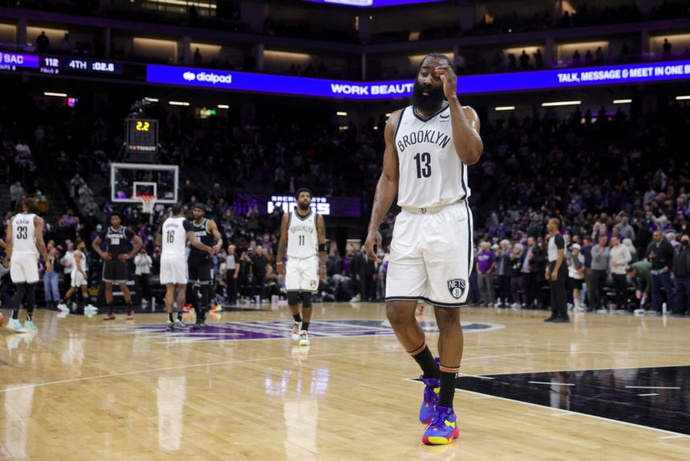 On the day of the trade deadline, Brooklyn shipped Harden to the Sixers in exchange for Ben Simmons, Seth Curry, Andre Drummond and two first-round picks.

Following the blockbuster deal, the Nets remained the consensus favorites to win the 2022 NBA title. Caesars Sportsbook elected to keep the Nets' odds at 4-1 after the trade, ahead of the Golden State Warriors (9-2), Phoenix Suns (5-1) and Bucks (7-1).

In his introductory press conference with Brooklyn, Simmons said he was looking forward to returning to action.

"I feel physically pretty good," Simmons told reporters. "Mentally, I'm getting there, so it's an ongoing thing to stay on top of that. But I think I'm heading in the right direction."

As we now know, Simmons would not set foot on an NBA court all season. Drummond, who provided much-needed rebounding help for Brooklyn early on, was essentially unplayable by the time the playoffs arrived (he logged less than 4 minutes of action in the Nets' season-ending loss Monday night).

Once Durant returned from his knee injury, Brooklyn got back on track and went 6-1 over a seven-game span in mid-March. Kyrie hung 50 on the Hornets in Charlotte on March 8. KD poured in a season-high 53 points in Brooklyn's victory over the New York Knicks on March 13. Two nights later, Irving scored a franchise-record 60 points in a blowout win over the Orlando Magic.

According to the Elias Sports Bureau, Irving and Durant became the first pair of teammates in NBA history to score 50 points in consecutive games. KD and Kyrie are also just the second duo to record multiple 50-point games in a season, joining Jerry West and Elgin Baylor, who accomplished the feat for the 1961-62 Los Angeles Lakers.

Then, in late March, New York mayor Eric Adams altered the city's vaccine mandate, clearing the way for Irving to play in home games. Adams, who initially stated that "it would send the wrong message" to give Irving an exemption when the city's other employees were still subject to the same mandate, said the revised decision was "about putting New York city-based performers on a level playing field."

Thus, the Nets would enter the postseason with their two top guns available (and Irving fresh/well-rested after being a part-time player for most of the season).

Yet, as it turned out, the disjointed Nets were no match for a unified Celtics team that had spent the past three months building its chemistry on both ends of the court.

Boston swept Brooklyn out of the playoffs, effectively locking up both Kyrie and KD.

Durant played well in Game 4, but disappeared in Game 3 on Saturday night. KD was shockingly passive the entire evening, finishing the must-win contest with just 16 points on 6 of 11 shooting; his lack of aggression and intensity was stunning. In that contest, the most important game of the Nets season, Durant — a four-time scoring champion and two-time Finals MVP — finished with 10 fewer points and 8 fewer field-goal attempts than Brown.

Irving closed out his season averaging 15.3 points while shooting just 37.2% from the floor and 18.2% from three-point territory over the final three games of the series.

Being swept out of the playoffs in the first round would have been considered almost unimaginable at the start of the season, or really at any point over the past 12 months, assuming KD and Kyrie were both healthy.

In fact, SportsBetting.ag confirmed to BasketballNews.com that the Nets are the first NBA team ever to enter a season as the favorite to win a title, yet fail to win a single playoff game.

It's not hyperbole to suggest that the 2021-22 Brooklyn Nets will go down as arguably the most disappointing team in the history of the National Basketball Association.

That's not the all-time legacy Brooklynites were anticipating this squad would be remembered for. Dating back to the 2021 postseason, the Nets are 1-8 in their last last nine playoff games...

The unforgettable Sunday afternoon in June 2019, when Durant and Irving revealed they were teaming up, was 1,030 days ago.

Imagine telling enthusiastic Nets fans back then that KD, Kyrie and company would win only one playoff series (and a grand total of seven playoff games) over the subsequent three seasons.