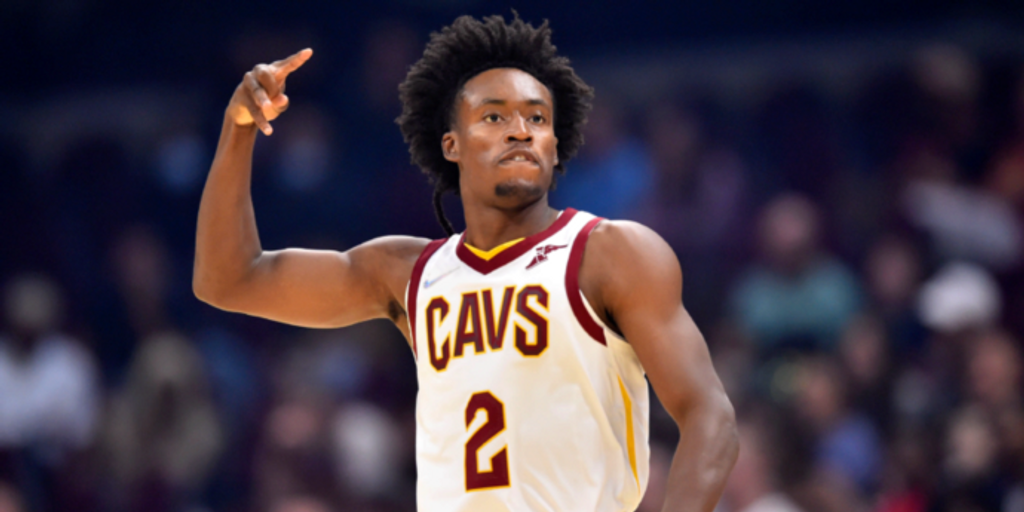 The case against, and for, the Cavs trading Collin Sexton

It’d be nice if Collin Sexton could be out there for this.

Like Kyrie Irving once upon a time, Sexton has had to follow LeBron James in Cleveland. How do you follow Jadakiss’ verse on Reservoir Dogs? I don’t know, but give Sauce Money a shout for trying.

The summer that James moved to Los Angeles, Sexton was selected No. 8 overall in the 2018 NBA Draft. And that very draft is why Sexton’s torn meniscus two months ago was especially devastating to his 2021-22 season.

Never mind that he would subsequently miss out on the Cleveland Cavaliers’ current rise to a 27-18 record, which is 1.5 games out of first in the Eastern Conference. Injured just 11 games into the season, Sexon's backcourt mate Darius Garland may have become an All-Star in his absence, and because Collin is in the last year of his rookie-scale contract without an extension, the fourth-year guard is heading for restricted free agency this summer. The two sides reportedly tried coming to terms before the October deadline, but couldn’t.

Now, the Cavaliers have an eyeball emoji toward the NBA Finals. The East, while deeper and more competitive than last season, is wide open. The consensus is that the Milwaukee Bucks and Brooklyn Nets are favorites, with the Miami Heat lurking like Jimmy Butler near a seemingly open passing lane. The Cavs perhaps fancy themselves as best of the next, with a shot to overtake even that group with a meaningful transaction or two.

When they lost Ricky Rubio to a torn ACL, the Cavs pivoted and acquired Rajon Rondo, clearly signaling that they’re here for now. And Cleveland could use Sexton to potentially make another move and further cement its intentions.

Let’s see if that’s the best thing for the wine and gold this season and going forward.

This one’s easier in the short-term. You’d replace Sexton’s injured status with a live, plug-in player who could help you today, though it would also mean Sexton wouldn’t be part of your future plans in Cleveland. And, you know what, if you’re thinking trade, that’s obviously something you’re good with.

If the Cavaliers want to, they could hold their success against Sexton, as cold and as unfair as that may seem. With Sexton as the lead guy, the winning was minimal. And after Collin's injury, Garland emerged as an All-Star candidate from his same backcourt, getting increased usage due to Sexton’s absence. You could even argue that Sexton’s absence — which led to Garland running the show — further unlocked arguably the Cavs’ best player this season in Jarrett Allen, along with Rookie of the Year favorite Evan Mobley.

Again, it may seem unfair, but an organization may frame it this way so it’s easier to move on. They could even point to Rubio’s play as a reason for not needing Sexton, and rather pair Garland with a healthy, veteran, multi-dimensional guard. If that’s the thinking, why would they extend Sexton instead of moving him now and attaching someone or something else, like Lauri Markkanen or draft capital for example?

In theory, moving Sexton would further clear the runway for Garland, even though it splits one of the best backcourt nicknames of all-time in Sexland. Garland turns 22 next week, and is extension eligible this summer. Although the Cavaliers won’t have to worry about that kicking in for another whole season, it’s all the more reason to consolidate your money ahead of time. Unfortunately for Sexton, it may leave him on the outside looking in.

By himself, Sexton's $6.3 million is difficult to match with a immediate help by himself, so he likely wouldn't be the lone moving part leaving Cleveland. The Cavs have had rumored interest in Caris LeVert, he's at $17.5 million this year and $18.8 million next season, so the front office will need to get creative here. Bogdan Bogdanović is at $18 million each through 2023, with a player option afterward. Those are a couple names to keep in mind so their respective teams are open for business.

Why you wouldn’t do that is because you'd like to keep Sexland together long-term and rely on the development of all parties to take you where you need to go. If you commit to Sexton and Garland, then that’s your young core, along with the twin towers of Allen and Mobley, plus the perfect defensive wing to complement this group in Isaac Okoro (unless he’s eventually dealt); let's not forget Lauri Markkanen either if he is kept. There’s also a world where Sexton bets on himself with a short-term, prove-it deal (Allen, who turns 24 in April, is the oldest of the bunch, by the way.)

Because Allen is on a five-year, $100 million contract, Sexton won’t command a max extension, and Mobley can’t get extended until 2024 at the earliest. Even then, he won’t see his (possible max) extension until 2025 begins. Allen is $20 million flat from now through 2025-26. Garland is at $8.6 million next season, and Mobley won’t even break double figures until 2024-25, the last season of his rookie-scale deal. Okoro is due $7 million next season and $8.9 million in 2023-24, the last season of his rookie-scale contract. There’s an easy pathway for Cleveland to maintain some financial flexibility even by keeping Sexton, whether short or long-term.

Rubio is a $17 million expiring contract; Markkanen is at $16.5 million, $17.3 million and $18 million per year following this season, which is not easily movable but still movable; Kevin Love’s number drops from $31 million to $29 million next year, the last of his contract. By the time Love’s deal is up, Garland’s deal would begin. Before that, Rubio’s deal would be done in time for Sexton’s to start — you can also get creative and keep both if neither is moved for win-now agreements between now and Feb. 10.

Additionally, people could nitpick Sexton’s game with good reason. He’s 6-foot-1, a natural shooting guard, and... less than a defensive-stopper, we’ll say. However, it is hard to replace his offense, which could carry over alongside Garland if the Cavaliers play this correctly. It takes a strain off Garland, anyway. Last season, Sexton averaged 24.3 points and 4.4 assists on 48/37/82 shooting splits on 6.4 free throw attempts per contest. For a 6-1 guard, that’s impressive, even if his team kinda sucked by NBA standards. He also just turned 23, and while you could hold the advanced metrics against him, playing next to Mobley, plus these versions of Garland and Allen, could help.

It’s complicated, but for now: keep him. If you watch the Cavaliers, they’re missing a shot-creator/catch-and-shoot option beside Garland... like Sexton. And given their emergence, along with their defensive success thus far, there’s a world where re-slotting him in is seamless.

Your core is an easy playoff team again next season with a high ceiling, because not many teams will enter next season with three All-Star candidates on paper. Mobley, in particular, has the potential to be elite at his position within 2-to-3 years. The Cavs might be best off keeping a good thing going and not biting off more than they could chew.