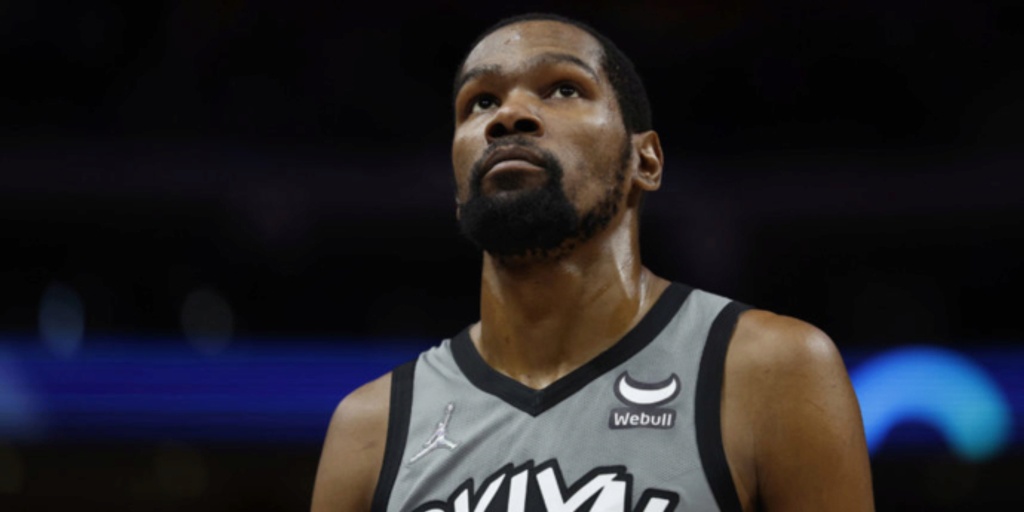 With hubris, he declared victory before the first battle.

Intoxicated by his hopes and aspirations, on that day in Miami, LeBron James defiantly counted, laughing at five and scoffing at six.

With Dwyane Wade and Chris Bosh flanking him, he envisioned two hands worth of championship rings and predicted that the actual games would be “the easy part.”

Eventually, though, the young King would learn the valuable lesson that many of his predecessors did: assembling the talent is the easy part. Convincing Lady Luck and Father Time to bless you at the same time — that’s the true challenge.

The Brooklyn Nets are learning that, firsthand.

It’s been a long 30 months since Kyrie Irving walked across the Brooklyn Bridge with Kevin Durant in tow. Remarkably, it’s already been a full year since James Harden found his way to Barclays Center to join them.

And just as remarkable is the fact that the trio has played together a grand total of just 15 times — eight times during the 2020-21 season, five games in last year’s postseason and a grand total of twice in 2021-22.

Whether it be a busted Achilles, a hamstring, an ankle, an MCL or refusal to get vaccinated, Brooklyn simply hasn’t been able to consistently field its trio.

In pro basketball, chemistry and the ability to work together is just as important as talent. Maybe the tide will turn and Durant, Irving and Harden will have the opportunity to develop the cohesion necessary to thrive and accomplish something great. But it’s far from a given at this point; there just always seems to be something standing in their way.

The latest bump in the road is a sprained MCL suffered on the part of Durant, who the team has only declared to be out “indefinitely.” While it’s entirely possible that Durant could return to action soon, it’s equally possible that he could be sidelined for as many as six weeks, according to the New York Post. And considering Durant’s age and the Nets’ conservative approach with its star, we’d be wise to take the over.

Six weeks from the day Durant suffered the injury would bring us to Feb. 26, the date on which the Nets coincidentally happen to be in Milwaukee to take on Giannis Antetokounmpo and his Bucks.

Including that game, the Nets will have just 10 road games remaining. That’s obviously important considering Irving remains ineligible for home games because of his vaccination status. And he’s not any closer to getting jabbed now than he was at the beginning of the season.

Said differently, it’s entirely possible that Brooklyn’s Big 3 will enter the 2021-22 postseason having played together about 25 times, and that’s essentially a best-case scenario based on what we currently know.

At this point in their partnership, we’re somehow still able to easily keep count of the number of games that they’ve played together, and teams that end up winning championships don’t typically have that problem. If anything, it’s the opposite.

Sure, there will always be teams like the 2008 Boston Celtics, but most other teams who manage to win-out are teams like the Bucks, the Toronto Raptors and the pre-Durant Golden State Warriors. Champions typically are built, brick-by-brick and one day at a time. Guys don’t typically show up to the gym, build a bomb squad and then achieve at the highest level. It just doesn’t usually work like that. Teams scratch and claw their way to championships.

The Nets are trying to glide their way there.

Obviously, Brooklyn has enough talent to buck the trend, but the other things that are required — chemistry, cohesion, synergy and good fortune — have simply been missing from their equation. And it’s a shame.

Through the first half of the 2021-22 season, Kevin Durant has somehow managed to make us all forget that he’s human. At 33 years old, with the mileage on his odometer and an injury that’s caused the sun to set on his predecessors, he’s had no problem helping us forget.

Ironically, as he, Harden and Irving have been cycled in and out of the lineup, Sean Marks has managed to find difference-making supporting players. Whether it be Jarrett Allen and Caris LeVert or Joe Harris and Nicolas Claxton, the Nets always seem to have the infantry ready. They’ve been missing the captains.

Perhaps what’s most frustrating is the fact that no amount of basketball talent will carry you through if the stars don’t align for you. And after so long, it’s fair to wonder whether they’ll ever align in Brooklyn. Especially as Durant heals and Irving and Harden each play out what could be — in theory — their final season in Brooklyn.

When it was all said and done for LeBron in Miami, the Heat had won the Eastern Conference four consecutive times and had two championships to show for it.

It wasn’t seven, but on the route from pre-championship pep rally in Miami back to Cleveland, LeBron learned a valuable lesson: winning in the NBA is no accident. Getting talented teammates is the easy part.

Everything else — including the things you can’t control — is what makes it really tough.

Sadly, through the lens of Kevin Durant and his star-crossed union with Kyrie Irving and James Harden, the Brooklyn Nets are learning that firsthand.