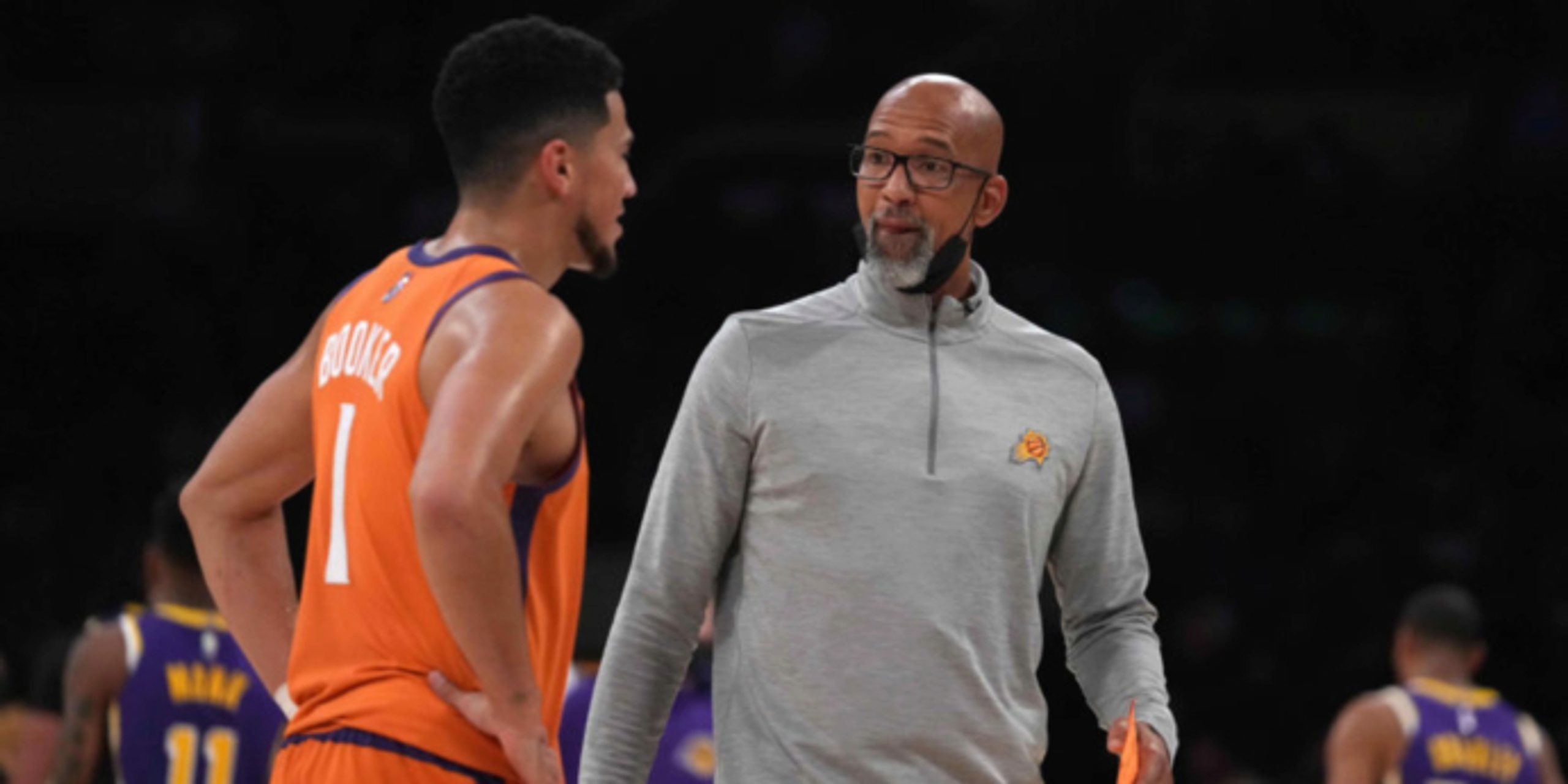 ESPN’s Baxter Holmes dropped a bombshell report on Thursday morning revolving around Phoenix Suns owner Robert Sarver. According to over 70 people that Holmes spoke to for this investigative deep dive into the culture in Phoenix since he purchased the team in 2004, racism and misogyny have been the main themes of Sarver's time with the organization.

Ten hours later, the Suns had to play a home game at the Footprint Center against the Houston Rockets. Phoenix eventually pulled off the 123-111 victory, but it was obvious this looming situation impacted the team early on, as they trailed at halftime to the young and inexperienced Rockets.

Phoenix media was able to hear from the Suns' three key pillars in response to the Sarver report, which included head coach Monty Williams and the backcourt duo of Devin Booker and Chris Paul.

When asked about it pre-game, Williams didn’t hold back on how it’s an uncomfortable feeling to shake right now.

“My reaction is a lot to process,” Williams said. “There’s so many things there, and for me, it’s still not clear as far as the facts are concerned. As someone who is a caretaker of the program, I find all of these things that are being said serious in nature. And these allegations are sensitive, [that] is an understatement. At the same time, they’re just not clear yet. An article was written, many opinions were shared, many feelings were shared, but all of it happened before I was here. Based on what little you all know about me, if any of that stuff happened while I was here, I wouldn’t be in this seat.”

Williams shared that the damning report on Sarver broke in the middle of the team's coaching staff meeting. Right afterwards, the Suns went into shootaround preparing for Houston. It’s hard to fathom, but it’s the hand the Suns’ roster was dealt as a new cloud hangs over the organization after an awe-inspiring NBA Finals run last season.

“It’s hard to navigate all of that stuff when you get the article [at] 9 o’clock in the morning in the middle of a coaches meeting and you’re leading a group, so it’s just been a lot to process,” Williams said.

“It’s just not good. If any of these situations — the situation in L.A. was clear and true. We heard. This one is different. There’s two sides talking about things that may have happened. I’m sensitive to both. Until the facts are clear, I have to be.”

A familiar theme throughout the night when asked, Williams wanted to wait to delve further into the report until NNBA commissioner Adam Silver and the league’s investigation into the work environment run by Sarver concludes.

“Yeah, that has to be the process I believe,” Williams said. “We’ll know more obviously once that is, again, settled."

Having to pivot to leading a team with championship aspirations forward out of this PR mess, Williams is maybe the perfect coach for this situation. Having the pulse on the locker room with complete trust from everyone on all levels, Williams will need to navigate these uncomfortable waters while trying to push the Suns out of a slower start to the regular season than expected. It’s a challenge Williams is willing to take on, and he has to keep the eye of the storm outside of their peripherals.

“I’m not the most eloquent guy, and I know that I speak from the heart at times and that can get me in trouble, but I’d rather do that and people know exactly where I’m coming from then to have them guess,” Williams, the always straight-shooter, echoed on Thursday night. “But I’m okay, I get to coach basketball. At the same time, I’m aware that these allegations are serious, I can’t say that enough.”

As one key leadership piece on the Suns digests the news individually, players face the same circumstances as well. Booker, who is in his seventh season at age-25, has seen almost everything the Suns’ chaotic environment has had to offer. Having had five head coaches and two general managers already in his career, Booker is finally enjoying the perks of organizational stability. Now, this report on Sarver throws a new wrench into his already topsy-turvy rollercoaster ride of experiences in the Valley.

“I wasn’t aware of the situation, and in my seven years I’ve been here I haven’t noticed that, but that doesn’t make me insensitive to the subject,” Booker said after the Suns’ win when asked about Sarver’s allegations. “I think the NBA opened an investigation, and they are going to do their due diligence of bringing out facts instead of 'he said, she said.' I’m sure the NBA has it in good hands and will do the proper research to find out the truth.”

Early on in Booker’s career, Earl Watson was a guiding voice to help him break into the NBA’s star tier. Without Watson empowering Booker with the ultimate green light, he wouldn't have’t hit the national stage scoring 70 points against the Boston Celtics while only being 20 years old. Booker also viewed Watson as a well-thought leader who brought the best out of him on a nightly basis. Watson, who spoke on the record in ESPN's blockbuster story, is someone Booker believes 100 percent. And it’s no different here when he read what his former coach had to say about his team’s top figurehead.

“Earl? Yeah, that’s my guy,” Booker echoed when asked about whether he believed in Watson’s stories share with Holmes.

Paul is the new star in town, but he’s been around the proverbial block in the Association. When he was with the Los Angeles Clippers, he saw firsthand the damage done during the Donald Sterling investigations, where he was quickly removed from his ownership post. Is deja vu occurring for Paul in Phoenix? Paul didn’t divulge much details, but he shared the same feelings on the fluid situation as Booker.

“I think, right now, like Book said, we’re not insensitive to everything that was said or whatnot but we don’t know all the details,” Paul said. “So, the NBA will do its investigation and in that time, all of us on our team will continue to play and do what we do.”

This was the last thing the Suns wanted to worry about, as they try to build off of their first playoff appearance in 11 years, one which culminated in a magical deep playoff run. It’s a distraction that will hang over the team for days, weeks or potentially months ahead as the NBA does its own digging into the severe allegations pressed upon Sarver by many former and current Suns employees.

Luckily for Phoenix, the trio of Williams, Booker and Paul is as strong as one comes as it relates to competitiveness and keeping their eyes on the ultimate prize. The Suns will continue to march onward, but it’s now a delicate bridge that has some cracks in the foundation. Whatever happens next, it will not only send shockwaves through the entire NBA community, but also the Suns’ strongly-built roster from top to bottom.