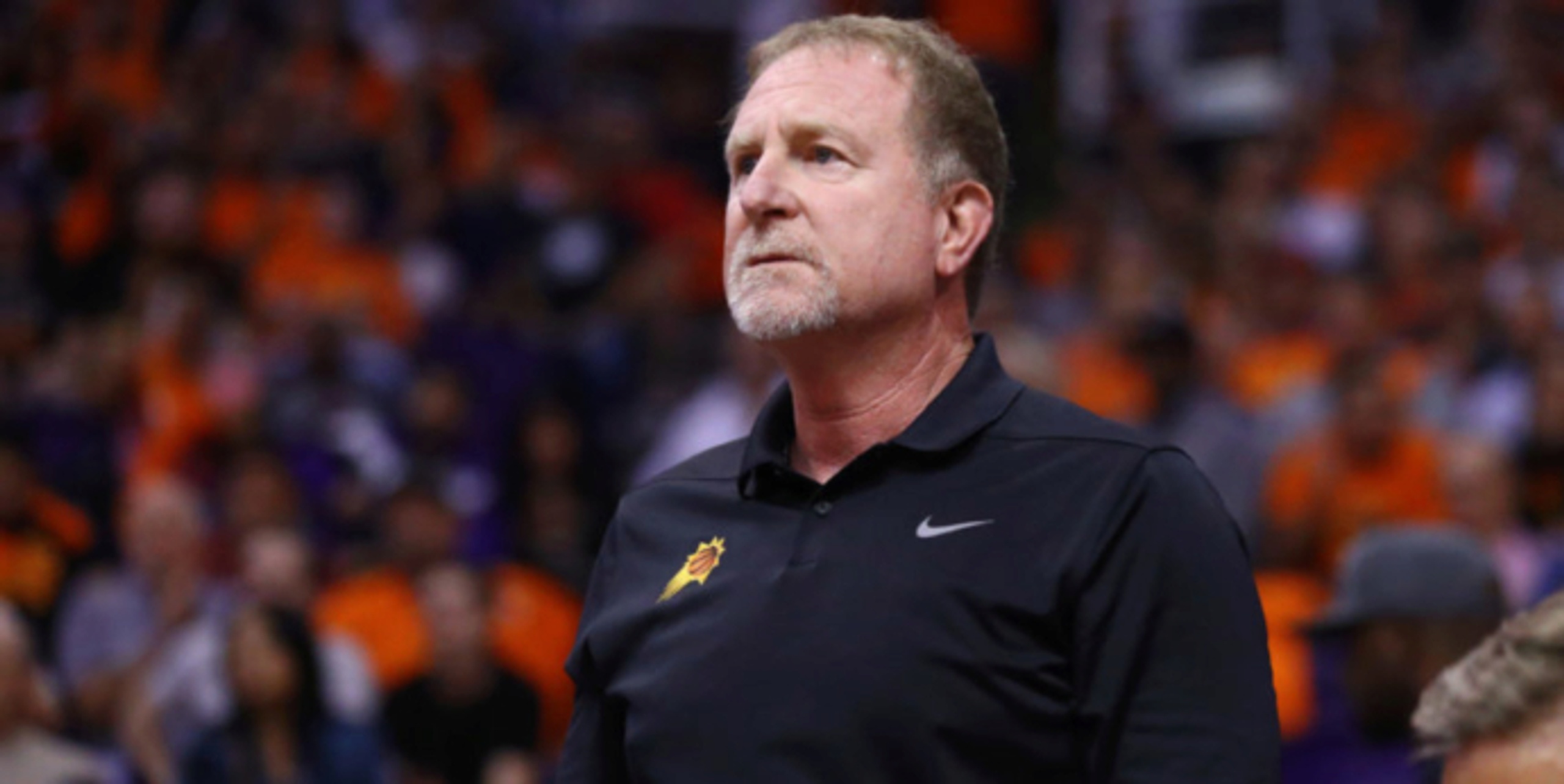 After two weeks of anticipation, ESPN’s Baxter Holmes released a damning story that accuses Phoenix Suns majority owner Robert Sarver of racism and misogyny. Holmes spoke to more than 70 people, including current and former Suns employees. Earl Watson, the Suns’ head coach from the middle of the 2015-16 season until the beginning of the 2017-18 campaign, also spoke on-record for this investigative piece.

This story sent shockwaves around Phoenix and the NBA, as it has spawned a league investigation into Sarver and the Suns. While Sarver and the Suns denied the allegations, this situations calls to mind what happened with former Los Angeles Clippers owner Donald Sterling, who was forced to sell the team after his racist comments came to light.

Holmes’ story features many different anecdotes about Sarver. After the Suns’ 106-100 loss to the Golden State Warriors on Oct. 30, 2016, Sarver reportedly went into the locker room and mentioned Draymond Green and a racial slur in the same breath.

“You know, why does Draymond Green get to run up the court and say (n-word)?" Sarver asked.

Watson fired back immediately, telling Sarver that he can't say that word as a white man. Sarver then repeated the word several times in a row before asking Watson why he can’t say it, because Green did.

This deep dive attempts to explore the potential deep-rooted issues that have surfaced within the Suns’ organization since Sarver took over in 2004. The piece features other allegations of racism, as well as misogyny and creating a toxic workplace environment.

For example, the report also claims that Sarver explained his decision to hire Lindsey Hunter over Suns legend Dan Majerle as the team's head coach in 2013 because "these (n-words) need a (n-word)" and someone who could "speak their language."

Watson, again on the record, also gave another example about how Sarver was against diversity within his organization from a conversation in 2016. Sarver reportedly mentioned how having a diverse staff of people could make it hard for a consensus to agree.

James Jones, the Suns’ current GM, responded to Holmes through Sarver’s attorneys: “On multiple occasions, I observed Earl engage in behavior and use language that was extremely unprofessional and offensive. That does not align with who we are."

Other Suns co-owners off-the-record told Holmes that they are embarrassed by Sarver’s actions over the years. Some within the organization also see this story being released as an opportunity to “right the ship,” as ESPN’s Adrian Wojnarowksi and Holmes reported in a follow-up story on Thursday afternoon hours after the initial article was published.

Now that these claims are public, it puts a severe damper on the Suns’ organizational reputation that they’ve spent years trying to rebuild with head coach Monty Williams and GM Jones. Instead of talking about the on-court product of a team who made history last season, making the NBA Finals after an 11-year playoff drought, the focus now shifts to Sarver and the NBA's investigation.

“The allegations contained in today’s ESPN article are extremely serious, and we have directed the Wachtell Lipton law firm to commence a comprehensive investigation," NBA executive vice president of communications Mike Bass said in a statement. "The NBA and WNBA remain committed to providing a respectful and inclusive workplace for all employees. Once the investigation is completed, its findings will provide the basis for any league action.”

To combat ESPN’s story, Sarver hired a law firm to fight these demoralizing accusations against he and the organization. Over the past few weeks (since word of this story first leaked), Phoenix has gone out of it’s way to release multiple PR statements from Suns brass saying these reports are undoubtedly incorrect.

Sarver and his attorney’s vehemently denied all of these allegations laid out by Holmes. Also, a few hours after the story’s release, Sarver put out this statement through Suns PR:

“I continue to be shocked by the false reporting from Baxter Holmes. While there is so much that is inaccurate and misleading in this story that I hardly know where to begin, let me be clear: The n-word is not part of my vocabulary. I have never called anyone or any group of people the n-word, or referred to anyone or any group of people by that word, either verbally or in writing. I don’t use that word. It is abhorrent and ugly and denigrating and against everything I believe in. The way I lead my personal and professional life makes that clear. Instead of reporting the truth, Holmes’ story is based on misrepresentations from former Suns coach Earl Watson and other unnamed 'sources.' Mr. Watson created an unprofessional and toxic atmosphere in our organization. He is clearly not a credible source. Despite hearing from witness after witness that disputed Mr. Watson’s stories, Mr. Holmes completely disregarded the truth here. Now we are in the position of trying to disprove things that did not happen.

“At this point, I would entirely welcome an impartial NBA investigation which may prove our only outlet for clearing my name and the reputation of an organization of which I’m so very proud.”

Watson, now an assistant coach with the Toronto Raptors, also released his own statement after Sarver called into question his credibility:

“I am not interested in engaging with an ongoing battle of fact. Instead, I want to applaud the courage of the number of players, executives, and staffers for fighting toxic environments of racial insensitivity, sexual harassment, and micro-aggressions with their truth. Basketball and 17 years in the NBA has allowed me the financial privilege to speak my truth, but we can’t forget about those who must remain silent for fears of losing their jobs. While our fortitude assists with the progress, there is still more work to be done in the name of equality, and I believe that one of the strengths of our league is it’s ongoing commitment to justice. This has been a traumatic experience, one that has affected me profoundly, and I am not willing to relive it every day. But I will not forget it, and I will it address it more fulsomely at a point int he future when I feel ready.”

Chapman (via Twitter): “I read the article on Robert Sarver. Want to say that I’ve known Robert for nearly twenty years. Since he bought the Suns. He’s highly competitive. He can be tough. Even abrasive at times. He’s unique. He’s had his growing-pains as an owner. But the Robert Sarver I know is not a racist. I couldn’t and wouldn’t put up with it. The people he’s hired with Suns and Mercury over the past two decades have been amazingly diverse.”

Kerr: “I never saw anything that suggested racism or misogyny, and I was very surprised to hear those allegations because that’s not the person I know.”

Babby: “Robert is surely a demanding, and, at times, difficult to manager to work for. But I can tell you as assuredly that he is not in any way shape or form a racist or guilty of any kind of sexual harassment or mistreatment of women.”

Jones, the NBA's 2020-21 Executive of the Year, released a statement through Suns PR two weeks ago on the forthcoming story: "None of what’s been said describes the Robert Sarver I know, respect and like — it just doesn’t.”

There are many other allegations laid out in Holmes’ story against Sarver, including claims that he interfered with coaches’ game plans and made lewd comments about his and players' sex lives.

The story will certainly reverberate throughout the Association, as the NBA officially launched their investigation into Sarver and the Suns on Thursday. Stay tuned to BasketballNews.com for all the latest on the situation, plus Holmes’ story can be read in full here.

MORE:
NBA News

Thanks to 3 legends, in Miami, I learned how to become a winner
LeBron James to miss at least a week with 'abdominal injury'

Featured News

Why the Nets taking a flyer on T.J. Warren is intriguing
22 min
Could Danilo Gallinari hold a cure-all for the Boston Celtics' offense?
3h
Lakers top Heat, Kings top Warriors at California Classic
yesterday
How does Malcolm Brogdon fit with the Boston Celtics?
yesterday
David Aldridge, Marc Spears, Etan Thomas on Kyrie Irving's demonization
2 days
Examining how Rudy Gobert fits with the Minnesota Timberwolves
3 days
What does Jalen Brunson's new contract mean for the New York Knicks?
4 days
Why Kevin Durant's attraction to the Suns should come as no surprise
3 days
What would a Kevin Durant trade look like?
June 25 2022
Subscribe to our newsletter
SUBSCRIBE
Follow Us



Basketball News
Home
Podcasts
Scores
Draft
Stats
News
Charts
Contact
Contact Us
Advertise With Us
Terms Of Use
Privacy Policy
Do Not Sell My Personal Information
Cookie Policy
Download Our App!
Stay up-to-date on all things NBA
Copyright © BasketballNews.com 2020. All Rights Reserved.
