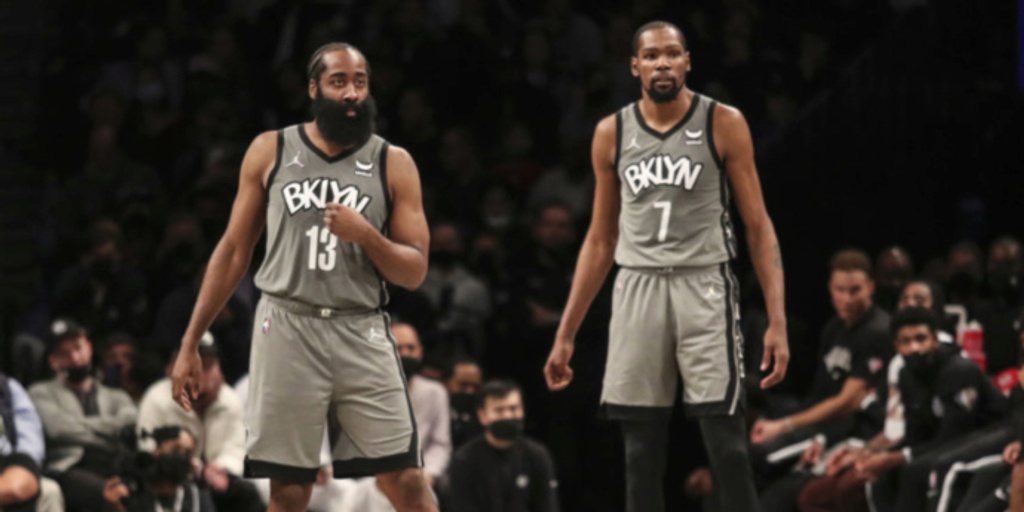 It’s time for another installment of your daily picks against the spread on “Nothing But Bets,” BasketballNews.com's daily NBA betting podcast. For Friday’s action, we have an awesome nine-game slate on tap.

All odds are provided by TwinSpires Sportsbook. Player over/under prop picks are from our sponsor, Prize Picks. We’ve hit three power play over/under bets over the last two days ($300 total to win $3,000)! Let’s dive into it all below.

Continuing to bet against the Pistons is surely winning many NBA bettors a lot of money. Detroit is going nowhere fast, while the Nets are really starting to click together at the perfect time. With the Pistons on the second night of a back-to-back, I’m forecasting a huge blowout win in favor of the Nets. Kevin Durant and James Harden are going to have their way with Detroit, and this is locked in as one of my best overall bets tonight. On Prize Picks, here’s a fun Nets-related prop to tail: Durant over 26.5 points, Harden over 20.5 points, LaMarcus Aldridge over 10.5 points, Harden over 8.5 assists. Locking this in with a power play wins you back 10x the amount, so $100 to win $1,000 if you so desire.

Give me the road underdog here to cover and outright win this game. The Grizzlies have been so fun to watch this season, not only because of Ja Morant’s star leap, but also due to young role players thriving as well. Desmond Bane and De’Anthony Melton have become key cogs to the Grizzlies’ success, helping take pressure off Morant on both ends of the court. In this matchup against the Wizards, I lean towards Memphis winning the perimeter and inside situations. Memphis is more well-rounded, plus they can get defensively when needed. Memphis as the underdog was too good to pass up on here, and the Prize Picks props were no different: Morant over 24.5 points, Bane over 15.5 points, Melton over 11.5 points, Morant over 6.5 assists.

There’s a first time for everything in the world of NBA betting, and tonight I’m rolling with the Magic to cover the 4-point spread at home against San Antonio. The Spurs are a little more experienced, but they have also been very inconsistent like Orlando to start this season. Orlando’s young core is showing some real signs of blossoming over the next few months, and this game could be a fun experience. Give me the Magic at +4, but not enough to feel comfortable in picking them on the moneyline odds. On Prize Picks, here’s an enticing power play option: Dejounte Murray over 18 points, Wendell Carter Jr. over 13.5 points, Franz Wagner over 12.5 points, Mo Bamba over 9.5 rebounds.

Get your popcorn ready for this rookie battle, folks. The two players leading the early Rookie of the Year race, Cleveland’s Evan Mobley and Toronto’s Scottie Barnes, square off for what should be a fantastic matchup. In this one, though, I’m leaning towards Barnes winning Round 1. However, the main reason isn’t because of the No. 4 overall pick. OG Anunoby and Fred VanVleet should have fantastic outings alongside Barnes, which is why I’m hammering the Raptors to cover the 5.5-point spread. For Prize Picks over/unders, these caught my attention: Anunoby over 19.5 points, VanVleet over 18.5 points, Barnes over 14.5 points, Jarrett Allen over 13.5 points, Allen over 11.5 rebounds.

This truly feels like a game where Giannis Antetokounmpo goes off. Easily the best player on the court in this one against an improved Knicks team, Giannis can simply be too much to handle when he catches fire. That’s what I’m projecting tonight as Giannis leads Milwaukee over New York, easily covering the 3.5-point spread. On Prize Picks, tail me on a Giannis-heavy over/under power play: Giannis over 27.5 points, Giannis over 11 rebounds, Pat Connaughton over 9.5 points, Giannis over 5.5 assists. If the Finals MVP does what I think he can to the Knicks’ defense, he’s a solid investment for a massive payout.

Paul George has been so awesome to watch back as the No. 1 option this season in Kawhi Leonard’s absence. The Indiana version of George is back, and even better than he was five years ago. George is doing everything for the Clippers, and that’s why he should be near the top of MVP ballots if Los Angeles begins to rattle off wins here throughout November. In Minnesota once again, I’m rolling with George and Co. to pull off the win and cover the spread. No surprise, I’m betting on a big outing from George on Prize Picks: George over 27.5 points, Karl-Anthony Towns over 24.5 points, Reggie Jackson over 18.5 points, Anthony Edwards over 23.5 points, George over 5 assists.

The Hornets got smacked around by the Warriors on Wednesday. However, I’m all-in on the Hornets being a top-six seed in the Eastern Conference this season. LaMelo Ball is taking the Year 2 leap. Miles Bridges is earning himself over $100 million on his next contract. Gordon Hayward and Kelly Oubre Jr. are also providing a nice buffer on the wing as well. If the Hornets want to prove they’re for real, these are games they win on the road across the country. Hammer the Hornets as the underdog on the spread, plus the outright win. Charlotte makes another statement, providing hope with a big bounce-back victory. On Prize Picks, betting on a high-scoring shootout could be a very wise way to profit: De’Aaron Fox over 21.5 points, Ball over 19.5 points, Bridges over 19.5 points, Harrison Barnes over 18.5 points, Ball over 2 threes. Honestly, this is the game I’m most looking forward to watching for Friday’s action-packed slate.

With Caris LeVert’s return earlier this week, Indiana is finally finding a groove. The big man duo of Domantas Sabonis and Myles Turner is finally showing promise after a slow start as well. Chris Duarte, the Pacers’ newest lottery pick, has zero fear becoming a go-to scorer from the jump. Everything for Indiana is riding high right now, but I think it crashes down to earth momentarily when they begin a west coast road trip in Portland against the Trail Blazers. Damian Lillard and CJ McCollum hold a huge backcourt advantage, so I’m riding that all the way to Portland covering the 5.5-point spread. If you also bet on big games between Lillard and McCollum, Prize Picks has you covered: Lillard over 25.5 points, McCollum over 22.5 points, Lillard over 3.5 threes, McCollum over 3 threes.

Who’s going to stop the Warriors, especially once Klay Thompson returns? This team looks scary good right now, thanks in large part to Stephen Curry’s brilliance once again. Going against this short-handed Pelicans team, Golden State should roll in blowout fashion. Curry is going to pile up the points, while key players step up alongside him. Honestly, this feels like the biggest deficit of the night in terms of win-loss margin. The Pelicans will have no answers for the Warriors, and it’s an easy bet to hammer the 9-point spread here. On Prize Picks, a hot shooting night from the Warriors could win you back big bucks as well: Curry over 30.5 points, Jordan Poole over 17.5 points, Curry over 5.5 threes, Poole over 2.5 threes, Andrew Wiggins over 1.5 threes.