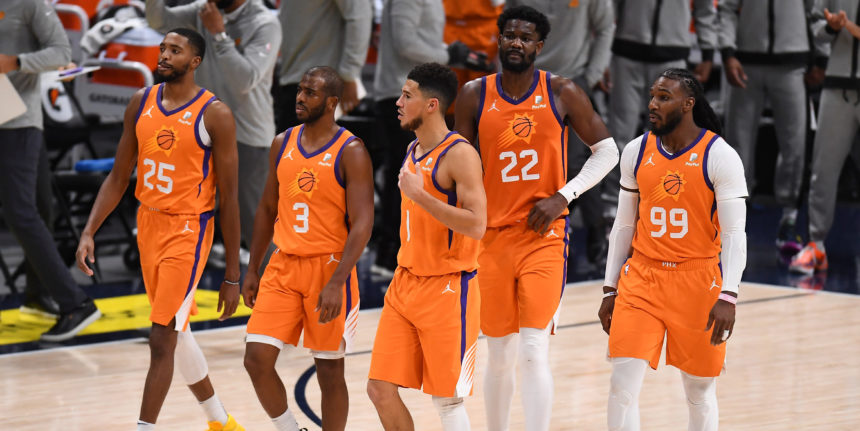 On Wednesday night, 17 was the Phoenix Suns’ unlucky number.

Everyone in the Suns’ locker room knew why they lost Game 4 of the NBA Finals to the Milwaukee Bucks. It was obvious, even before head coach Monty Williams highlighted the two areas of concern while addressing the team.

The Suns had 17 turnovers to Milwaukee’s five. Also, Phoenix allowed the Bucks to grab 17 offensive rebounds, while grabbing just five themselves.

“The turnovers just crushed us tonight. We shot 50% from the field, but they got 19 more possessions,” Williams said. “Over the course of the game, when you just give it up that many times, the turnovers and offensive rebounding were a bit of a hill for us to climb... We certainly had a lot of self-inflicted stuff tonight.

“We had 17 [turnovers] and they scored 24 points, you know what I mean? That was pretty much the game right there. Then, you double that up with the offensive rebounding… As a team, we gotta take better care of the ball.”

Chris Paul really struggled in Game 4, to the point that a reporter asked Coach Williams if there’s an injury or something limiting him (“No, he’s fine,” Monty responded). Paul had a team-high five turnovers to go along with 10 points, 7 assists and 4 rebounds (with a team-worst plus/minus of -10). Afterward, Paul took responsibility for the loss.

“It was me,” Paul said. “I had five of them [turnovers]. It was bad decision-making. That time we were down two and I tried to cross over right there, I slipped, turned it over. I had some bad passes in the first half. They got a significant amount more shots than us, so for me, I got to take care of the ball. We got 17 turnovers; we shoot the ball too well not to have those opportunities to score.”

Williams didn’t recognize the Suns team that lost Game 4. This season, Phoenix averaged just 12.4 turnovers per game (which was fourth-best in the NBA), so this performance was very out of character. That’s why the Suns' coach is confident that his players will correct their mistakes and execute better going forward.

“In my eyes, it's like a blip on the screen because we haven't played that way from a turnover perspective this year,” Williams said. “Usually when we do, we bounce back and we're a bit more efficient. Give them credit: they do a really good job of getting hands on balls. They were switching a lot tonight; there were times where we took advantage of it and there were times where we tried to make passes that may not have been there because they're not helping off as much because of the switching. But this is not our normal. 17 turnovers and live-ball turnovers that turn into points? Like, we typically don't do that... We're not going to have that many turnovers from our starting group [again].”

Coach Monty Williams to the Suns after the game

The Suns’ players understand what they need to do.

“In games like this with such high stakes, when you give them run-out points, that's big swings; those are tough,” Cam Johnson said. “Then, the rebounding aspect, you get some long ones when you're trying to get in there and put a body on them, and sometimes they're just taking some bad bounces, but we got to be better on that end for sure. I know myself, I can't leave a game with just one rebound. So, a lot to learn from, a lot to look at, but [the] turnovers and rebounds can't happen…

"It's the Finals; you're not going to get away with anything easy. You're not going to coast to any victory. There's no hitting the panic button right now. There's no panic. You go back home and look at it and adjust. I think we did some things better this game than we did last game. It's three more. Three more. [We] gotta get two of those... This is what we all dreamed of, being in this situation, right? There's no time to hang your head. There's no time to pout. This is 2-2 in the NBA Finals. We have an opportunity to do something really special and one thing Coach has said in the past is each game takes on a life of its own in the playoffs… We gotta be ready to capture the next one.”

Devin Booker erupted for 42 points on 60.7% shooting from the field in Game 4, and he did it by hitting tough shot after tough shot. Just like his idol Kobe Bryant, Booker has a penchant for knocking down difficult, contested shots.

This season, Booker shot 55% against "very tight" coverage (with a defender within 0-to-2 feet), including 64.3% of his two-point attempts.

During these playoffs, Booker is making 2.6 field goals per game against "tight" defense (with a defender within 2-to-4 feet), which is the second-most among all players behind only Kevin Durant (5.8). Also, he’s shooting 45.9% on tightly guarded twos.

“He hit some tough shots. Some very, very tough shots,” Khris Middleton said of Booker after Game 4. “Contested. Double-teamed. Double-clutch shots. But we stayed with it, kept trying to make him work, and we’ve got to do it together. That’s the only way we can win.”

All season, the Suns have been excellent at bouncing back after losses.

This was just the fifth time all season that the Suns have lost consecutive games, and their first time losing a Game 4 during this postseason. The Suns had just one three-game losing streak this season, and it was back in late January when they were still getting acclimated to one another.

Phoenix lost back-to-back contests to the Los Angeles Lakers in the first round, but then won three-straight to end the series.

“We got to man up and do what we've been doing all year: just respond to it, respond to a defeat, respond to things not going our way,” Jae Crowder said.

Why is this Suns team so good at responding after losses?

“That's a character thing in a sense, but I think when you preach it all year, your whole locker room starts to believe that and starts to apply it,” Crowder explained. "We have been doing a good job of it since early in the season... If we have a bad possession, make the next one a good one. Or if we have a bad half, let's come out and have a good half. All the way down to if we have a bad game, come back and respond to it next game. So, you have to build that, and that started early in the year. That just hasn't come about [all of a sudden] right now. It's about the guys in the locker room, our coaching staff doing a good job of preaching that, and we have been doing a good job of believing it and applying it.”