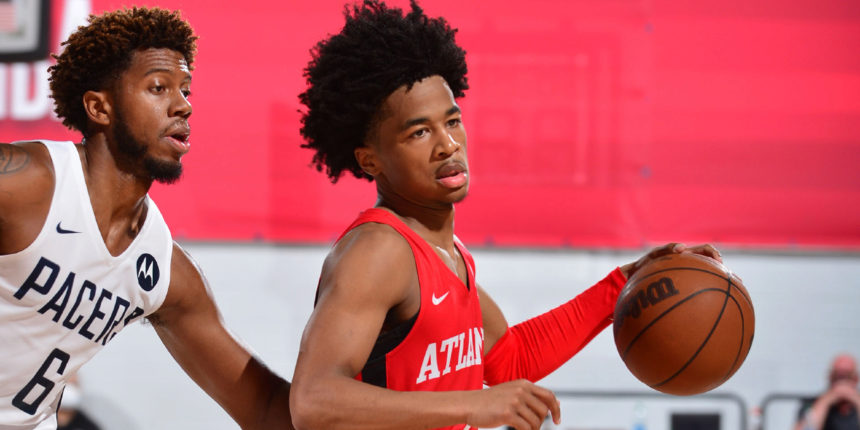 The 2021 NBA Draft class was the story of NBA Summer League Day 3.

The headlining matchup of top-pick Cade Cunningham vs. second-overall-selection Jalen Green certainly garnered enough conversation. But even from the first game, rookies painted tantalizing pictures of their NBA potential. Four of tonight's five "studs" were awarded to first-year prospects.

Does this mean the 2021 NBA Draft will be the best draft class ever? Of course not. As always, it's important to remember not to draw definitive conclusions from games in a unique setting that will never be replicated in the actual NBA season. But for fans, it's okay to get hyped when the future looks bright.

Here were some of my Day 3 observations:

Chris Duarte is a sniper pic.twitter.com/YtPSllgdti

It was pure joy to watch the Pacers creatively use their lottery pick on offense. On one early play, Duarte bolted on a nice Iverson cut to get a quality look at the rim, though he missed the finish. Later in the first quarter, Indiana drew up a baseline out-of-bounds play that saw Duarte skirt through screens for a catch-and-shoot three.

The 24-year-old was communicative and aware on the defensive end. Though he had a couple of "heat-check" possessions, Duarte made five three-pointers, including two sensational buzzer-beaters. His assist numbers would have also been much higher if teammates finished off more of his nice passes.

Man oh man... I had to remind myself multiple times not to overreact to one summer league game. Cooper was scary on offense. He threw ridiculous, NBA-lead-guard-caliber dimes all over the court. Cooper also tallied six turnovers, but the mistakes are forgivable when he's creating these unique chances for his teammates.

More importantly: the perimeter shooting. Cooper made 13 threes in college; he canned five on Tuesday, including step-backs and quick shots off the catch. Defenders were content to let Cooper fire away given his track record. He made them pay right up to the buzzer-beating end of Atlanta's 84-83 win. Seeing this type of performance from Cooper should make opposing teams sweat.

Nesmith went on an absolute heater in Boston's lopsided 107-82 win over the Nuggets. He was lethal off screens, maintaining balance and consistency to splash triple after triple. But he also attacked off the dribble, driving to the rim or pulling up in the mid-range with equal success.

This performance is the missing piece for the Celtics' bench. Obviously, Nesmith won't be this hot, and is probably somewhere in between Tuesday's dominance and Sunday's frigid effort. But games like these tease the type of weapon the second-year wing can be without commanding a ton of usage. He still has to work on keeping players in front of him when defending.

Tuesday's matchup against Cade Cunningham was an amazing example of growth from Green. He flailed in the early going as the Pistons blitzed, and threw some wild turnovers. But after the first quarter, Green started to settle in and pick his spots in effective fashion. He made shots off the catch, cut well and only turned the ball over once in the latter three quarters. It wasn't a pretty night, and yet Green still finished with quality numbers.

Cade Cunningham catches Jalen Green reaching, hits him with the behind the back dribble and makes the 3!! pic.twitter.com/xkEBiQDZQS

On the other end, Cunningham exuded the poise and cerebal vision that helped make him the first overall pick. The two assists woefully underrepresent how electric Cunningham was as a passer in transition, in the half-court and while attacking the basket. His four three-pointers came from all over the court, including one moment when he caught Jalen Green slipping. Defensively, Cunningham picked off a bunch of long passes and led the early-system pressure that caught Green off guard.

Nnaji was pretty invisible for most of the afternoon. When he did show up, it was with some brutal misses on three-pointers. That's a notable area of development for the 2020 first-round pick; he made 40% of his threes as a rookie after hitting just 29% of them in college. The 6-foot-9 forward was also somewhat concerning when he put the ball on the floor. Nnaji just doesn't have tight handle at this stage, and blew one fast break by flying into traffic out of control.

Robinson enters his fourth season since the Clippers selected him with the No. 13 pick in the 2018 NBA Draft. Summer league is becoming a potential make-or-break opportunity for Robinson's NBA future, and the young guard just isn't showing enough. He had some nice moments as a pick-and-roll operator, but needs to be the perimeter threat he was at Boston College. That hasn't happened yet.

I am a massive fan of Madar's game and buy his NBA future. But this was a sobering reminder that the 20-year-old still has a ways to go in his development. With Payton Pritchard running the offense, Madar was much less effective off the ball, and when he had it, he made some questionable decisions.

On one occasion, Madar had a sensible 12-foot floater chance, but pulled up for a jumper only to get blocked from behind. He also dished out a nice underhand pass... that should have been a lob on a two-on-one fast break. He has to know when to incorporate other moves besides the fadeaway in the mid-range, and make some smarter passing decisions.

We've known for a decade that Faried can rebound the ball at a high level. But the veteran forward has to show something else as he fights to get back into the league, and he didn't do that on Tuesday. Faried was clumsy as a screener and poor as a finisher. His range still does not extend past the elbows, and he went just 1-for-4 on free throws. Fellow vets Emmanuel Mudiay and Michael Beasley both had nice games, making Faried's lackluster outing more incriminating.

Scrubb opened up his summer-league stint with a stellar game on Monday. Tuesday night, however, the score-first forward just didn't have the touch. Scrubb missed a bunch of attempts at the rim and struggled to finish through contact despite his frame. His struggled with the three-ball as well and got caught ball-watching on defense. The 2020 second-round pick did make good decisions as a passer, though, and should inspire plenty of optimism on offense.