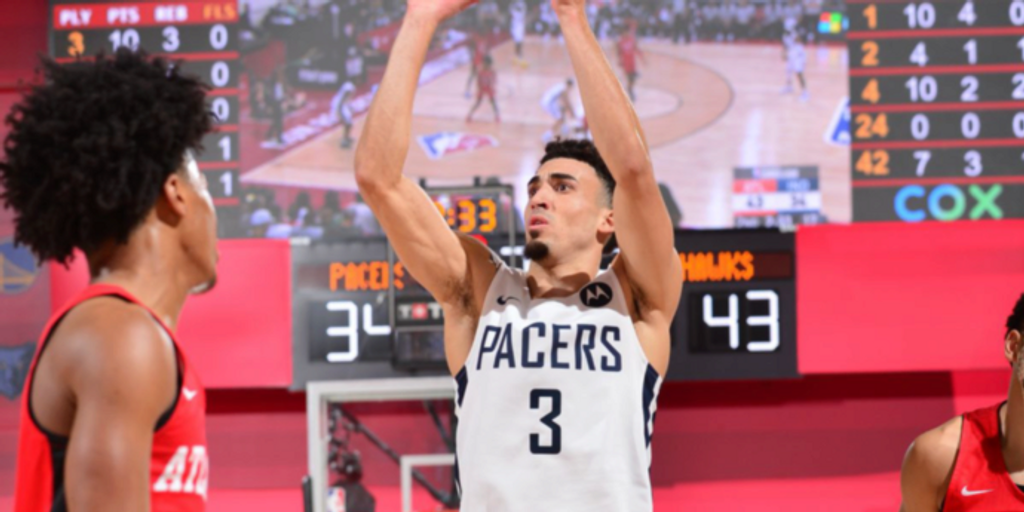 Chris Duarte's path to the NBA is one that's rarely traveled. Entering the league at age 24 — only seven months younger than Phoenix Suns star Devin Booker — Duarte had to work pretty hard to even get noticed on a national stage. Beginning his collegiate basketball career at Northwest Florida State, a junior college, Duarte was able to catch the attention of D1 programs and eventually landed at the University of Oregon, a long way away from his native Dominican Republic.

The Indiana Pacers fell in love with Duarte as both a prospect and a person and selected him with the 13th overall pick in this year's draft. On draft night, the 24-year-old Dominican wing accomplished one of his major goals. There were trials and tribulations along the way, though. Nowadays, it’s rare to ever see a draft prospect like Duarte go from unnoticed in junior college to being a lottery pick.

Duarte’s new journey is just now beginning, and the realization started to kick in of how far he’s come during the MGM Grand NBA Las Vegas Summer League.

Before becoming one of the hottest names in the pre-draft process — rising from a late first-round pick to someone who garnered significant buzz from multiple teams in the lottery — Duarte shined in his final season at Oregon. He averaged 17.1 points, 2.7 assists, 1.9 steals and 0.8 blocks per game while shooting a blistering 42.4% from three-point territory. The 24-year-old do-it-all wing also became one of the NCAA’s most efficient scorers, turning in a true shooting percentage of 65.7.

For a team like Indiana — one that feels it's ready to win right now with a strong, well-rounded roster — Duarte fits into their culture seamlessly. New head coach Rick Carlisle, who returns to Indiana after over a decade with the Dallas Mavericks, feels Duarte has a role within their already deep rotation. After sharpshooter Doug McDermott’s departure to the San Antonio Spurs in free-agency, Duarte figures to fill that role while also providing even more two-way versatility.

"He's a guy that we feel can play three positions — two, three and play some one,” Carlisle said after the draft about Duarte. “He’s a terrific offensive player. He's a terrific defender. And a guy that's very mature we feel like can help us now.”

Duarte became regarded as one of the most NBA-ready prospects in the 2021 draft class. Now with the Pacers in Las Vegas, Duarte is proving those thoughts to be right on the money. Already, he looks the part of an instant-impact rotation player who is reaching the “too good for summer league” threshold. In Las Vegas, Duarte is averaging 17.5 points, 2.5 assists, two steals and one block while shooting an eye-opening 47.1% from three-point range.

Duarte’s confidence is at an all-time high in Las Vegas, allowing the Pacers to experiment with other elements of his game. Although he figures to jump between shooting guard and small forward, there’s untapped playmaking potential due to his extremely high basketball IQ. Based off Carlisle’s post-draft comments, Duarte could see time as a tertiary playmaker who can create easy looks for others in certain situations.

"Coach Carlisle likes to have multiple ball-handlers,” Pacers summer league head coach Mike Weiner said after Indiana's second game on Tuesday. "The league is going more skill-oriented and the more attackers and ball-handlers we have, the better. We feel Chris is going to fit in with that. We’re putting him in different situations, wanting him to read the game, feel the game. A lot of the NBA game right now is feel.”

Duarte’s feel for the game is already outstanding. Couple that with his pro-ready shooting and defensive versatility, and Indiana has a player poised to take on an important role in his rookie campaign. So far, the returns in summer league on the Duarte pick have been outstanding for Indiana — and there’s no wonder why multiple teams tried to trade up on draft night for him.

"Well, that's me. I let the game come to me,” Duarte said after his summer league debut. “I don't force a lot of shots. And when I do, I just feel bad about myself, because that's not the right way to play basketball. I'm a team player. I try to make the simple play, so that's me."

Currently, outside of Duarte, one Dominican-born player is on an NBA roster: Al Horford of the Boston Celtics. Duarte is putting a whole country on his back with his strong professional debut in Las Vegas.

Moving forward, keep your eye on Duarte. He’s already proving worthy of his lottery status with a well-rounded game that surprisingly has plenty of untapped potential.

Duarte has cleared a major hurdle in getting drafted by the Pacers, but he’s not satisfied yet.