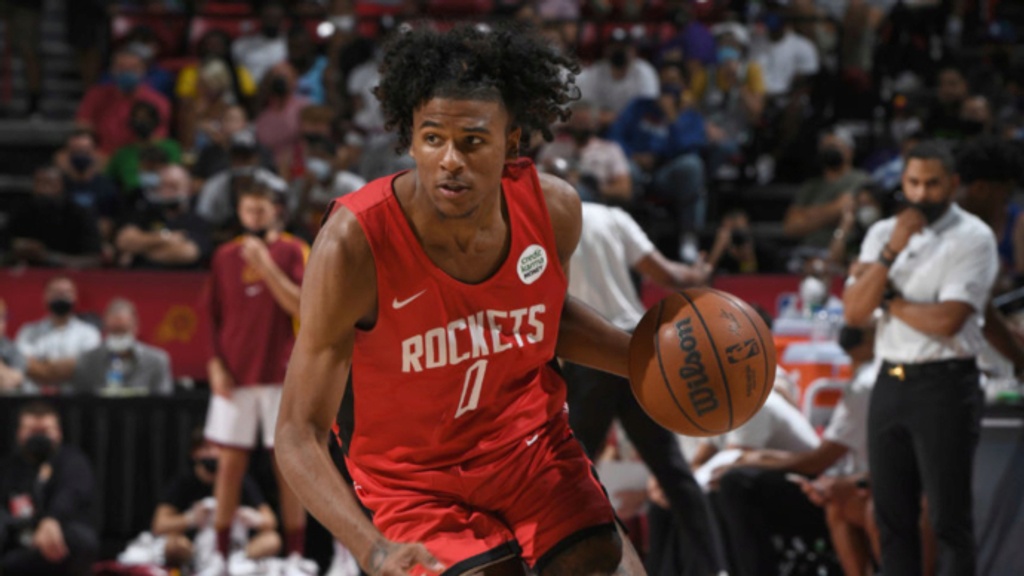 Jalen Green, the No. 2 overall pick of the 2021 NBA Draft, lived up to his pre-draft hype in his debut at the MGM Resorts NBA Summer League on Sunday.

Green began the draft process being regarded as the class' best pure scorer, and he hammered home that point with emphasis when he led the Houston Rockets to an 84-76 victory over the Cleveland Cavaliers on Sunday. Green dropped 23 points, including 4-of-9 from three-point range.

Forgoing the college route for the G League, Green's comfort level stood out immediately in the contest. He got to wherever he wanted on the floor and was able to attack the Cleveland Cavaliers' defense with effortless precision. Houston seems to have gotten themselves a natural-born bucket-getter, one who looks the part of an eventual NBA scoring champion down the road.

"I think it came pretty natural," Green said after Sunday's contest. "It's just like the G League. I feel like it came natural."

Perhaps due to his previous professional experience in the G League, Green showed no issues adjusting to the NBA. He looked comfortable and prepared, and one can't help but wonder whether the G League route could soon become a trend for all high school stars.

Emoni Bates, one of the top 2022 prospects who recently reclassified, is heavily considering following in Green's footsteps, and he could be getting reassurance to go this direction now.

Green's ability to navigate the floor and score at will was an awesome sight to behold. Whether it be navigating pick-and-rolls or creating eye-opening seperation on his step-back jumpers, Green has all the makings of an effecient three-level scorer who should be right at the top for 2021-22 NBA Rookie of the Year consideration.

Yeah you can't teach this.

Green's easy transition to the pros as a rookie will turn a lot of heads with respect to the future of the G League Ignite program. Green led the charge, being selected No. 2 in the draft, but Jonathan Kuminga (No. 7 overall), Isaiah Todd (No. 31 overall) and Daishen Nix (undrafted) are helping pave the way for tomorrow's prospects, especially since they may be entering the Association with more seasoning than most.

"Yeah, in the beginning of the G League, they said we not gonna win no games," Green said after he took his talents to the G League last season. "They pretty much doubted us all-around from the coaches to the players. I'm trying to put on a show for my teammates, coaches. They all helped me get to this point."

After trading James Harden to the Brooklyn Nets last season, Houston hit the reset button completely. The team will now embark on a new era led by Green, Kevin Porter Jr., Alperen Sengun and Josh Christopher. The hope for general manager Rafael Stone is that the youngsters could lead a fruitful future for the Rockets, post-Harden.

Green's summer league debut had everything you could have wanted to see from a potential franchise player. And with the Rockets' cupboard empty, Green steps into a No. 1 role next season with the opportunity to potentially score 20-25 points per game immediately.

Even though it won't lead to wins right away, Rockets fans have to be happy about the future. Green's first impression drew rave reviews, and he has now become the top storyline coming out of Las Vegas.