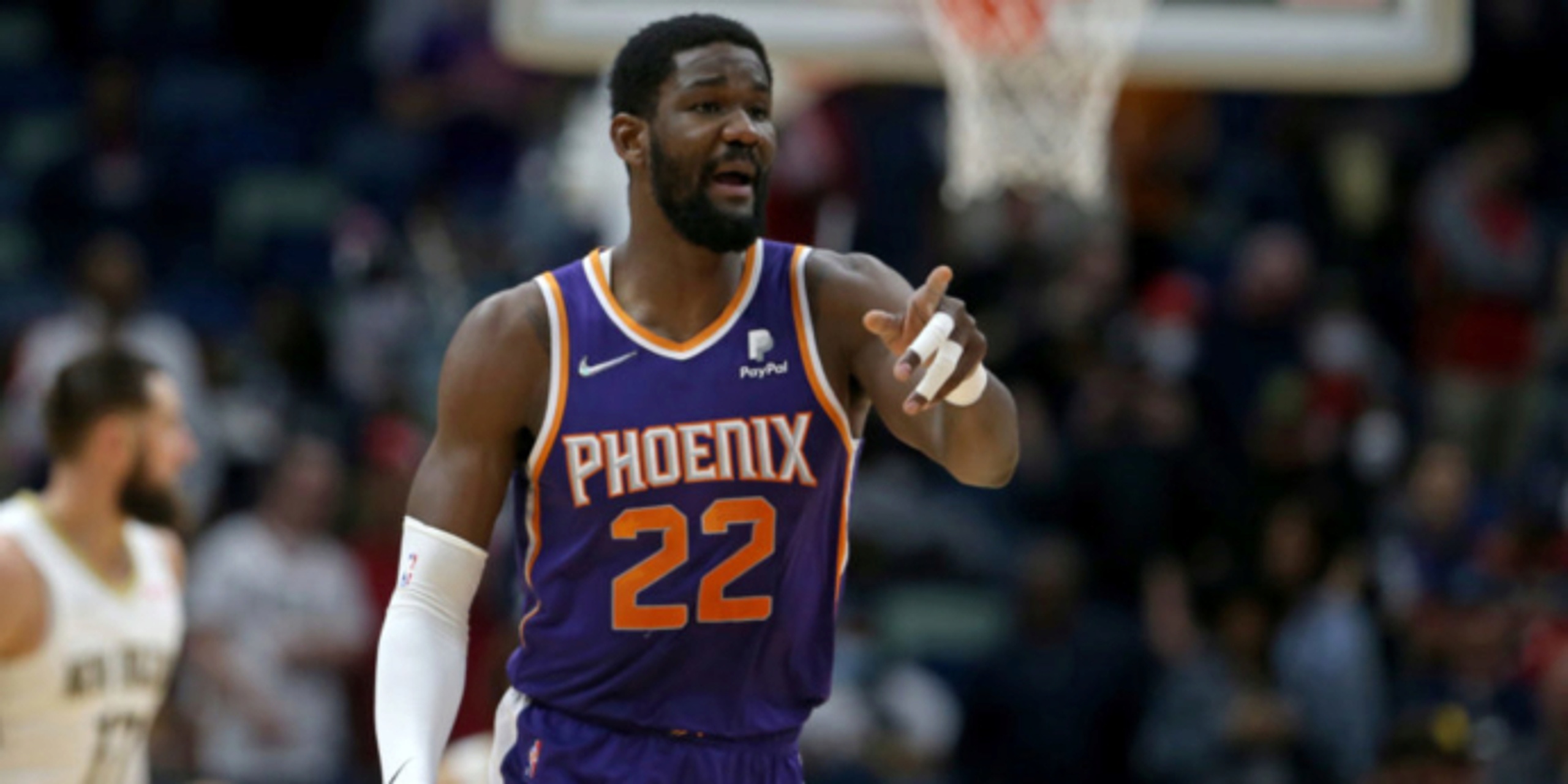 Should Suns give Deandre Ayton a max deal? Positional value says no

The NBA is undergoing an epiphany on positional value, much like the NFL has begun to re-evaluate modern-day running backs. Since positions are becoming less and less important and versatility is the name of the game, what’s next for NBA centers?

Centers are slowly but surely being phased out, aside from some rare exceptions. Long gone are the Roy Hibbert-archetype bigs who patrolled the paint with slow-footed speed. The upgraded version looks more like Rudy Gobert in Utah, producing at an even higher level. But even with Gobert, long-term questions have arisen due to his bloated super-max salary.

If Gobert’s on-court value is diminishing as well, which bigs will be deemed worthy of a lucrative second contract? It’s an elite club where the positional value more than outweighs the price tag: Nikola Jokic, Joel Embiid, Karl-Anthony Towns, Giannis Antetokounmpo and Bam Adebayo top the list. For all other centers, will they be worth their price in the long run?

For the Phoenix Suns, a $100-plus million decision awaits on Deandre Ayton, their only No. 1 overall pick in franchise history. Does Ayton deserve to be mentioned among those names, or does he fall a tier or two below? Ayton is an anchor of the Suns’ historic defensive turnaround under head coach Monty Williams, plus his soft touch on the offensive end already brings super efficient scoring value too.

The Suns and Ayton’s representation are about to enter an awkward period, and it seems like the odds of Ayton playing elsewhere next season are increasing. Do the Suns believe Ayton is worth a max-level contract? Does Suns general manager James Jones believe Ayton can be on the same tier as an Adebayo or Gobert?

Based on Ayton's usage within Williams’ system (19.8% usage rate since 2020-21), Phoenix’s need to reconstruct the roster for more wing-based scoring as well as the big man's own desire to be a more featured piece on offense (plus his desire for a max deal), I wouldn't be surprised if Ayton’s days with the Suns are numbered.

One could argue that Ayton would be even more valuable if he were to leave Phoenix and sign elsewhere. In another situation — in Detroit with Cade Cunningham, for example — giving Ayton the max would be an acceptable allocation of resources that benefits both parties. However, in the Suns’ system, I don’t believe Ayton is worthy of max-level money.

A fatal flaw that prevents Ayton from being mentioned in the top tier of big men is his lack of self-creation ability, which he's failed to develop throughout his first four seasons with the Suns. According to Cleaning The Glass, 74.8% of Ayton's shots have been assisted on in his career. Compared to his max-salary counterparts, Ayton is nowhere close on self-creation capabilities. And at this point, I have serious doubts that this will ever become a consistent part of his game during his upcoming prime years.

The NBA’s elite big men buck the trend of super small-ball and three-point-shooting barrages because they bring unique traits to the table. Antetokounmpo and Embiid can simply punish any defenses that are thrown at them. Jokic’s demigod-like ability to run an offense and be its primary scoring engine speaks for itself. Towns is one of the greatest perimeter-shooting bigs of all-time. Adebayo’s defense and playmaking versatility, coupled with his recent development as an on-ball creator, raise his value. Gobert’s price tag is a tough pill to swallow, especially later on, but he’s one of the most impactful rim-protectors we’ve ever seen (while also providing efficient scoring around the rim).

Ayton is a very good basketball player, but he fails to emphatically check any of the boxes that the other max bigs do. He brings immediate value as a scoring threat and rim-protector, with a rare ability to easily rack up 20-and-10 outings like it’s nothing. His stat line shows that there’s real promise if he is fed like a primary offensive hub, but that’s not going to happen in Phoenix.

The Suns are moving away from the inside-out approach in favor of outside-in, a modern flip of the script that likely provides some insight into how they view centers. JaVale McGee was an excellent free-agent addition for Phoenix last summer, and he ended up putting up nearly identical numbers to Ayton on a per-36-minute basis:

McGee is another example where working within the Suns’ system, especially playing alongside Chris Paul and Devin Booker, brings immense improvement on the margins. From the Suns’ perspective, would they rather just pay McGee $5 million again and add a difference maker elsewhere for the same price as Ayton? For example, would it make more sense to bring aboard a unique modern fit in Jerami Grant via a sign-and-trade deal? There’s no doubt that these discussions are ongoing for the Suns, because this decision will decide what direction the team is heading in the post-CP3 era.

As a restricted free agent, Ayton is heading toward a negotiation standoff with Phoenix. If the organization doesn’t view him as a max-level player, expect to see the Suns’ offer come in around a similar annual value as Al Horford ($27.8 million) or Nikola Vucevic ($25.0 million). John Collins provides a recent example of restricted free agency leading to a cheaper payday, as he signed a five-year, $125 million deal with the Atlanta Hawks in the 2021 offseason.

For Ayton, it seems like a lock that he'll get a max contract from some front office. The Detroit Pistons, Portland Trail Blazers, San Antonio Spurs, Atlanta Hawks, Charlotte Hornets and Indiana Pacers are all expected to show interest once free agency's moratorium period opens on July 1. Will Phoenix try to pull off a sign-and-trade to bring back some win-now pieces? If another team extends a max-level offer sheet, would the Suns match it or let him walk? These are the big questions entering this offseason.

Another angle that is falling under the radar is how the Suns view Ayton’s motor. Will Ayton continue to improve his game or eventually become an albatross contract a few years from now?

“Definitely getting to my second contract; that’s my success,” Ayton said before being drafted by the Suns.

Throughout Ayton’s career in Phoenix, teammates like Paul, Booker and Mikal Bridges have had to keep him locked in throughout games to ensure he's playing at a certain intensity level. They have even mentioned it during press conferences. When Ayton is locked in, he’s one of the most dominant two-way bigs in the NBA. The issue is his inconsistency and those moments where he loses focus. It's unclear why this occurs, but there are some games where it's apparent in the first few minutes whether it will be a positive or negative outing for the big man. If there are concerns about Ayton’s motor, that will also enter this discussion.

Jones and Williams know more about Ayton's work ethic and motor than just about anyone given all the time they've spent with him behind the scenes, so we'll see if this factors in to their decision.

The drive to be great and the sheer will to refuse failure are what separate great players from good ones. Does Ayton possess this trait to become one of those exceptions to the rule for non-floor spacing bigs within the modern NBA?

This year’s Finals matchup between the Golden State Warriors and Boston Celtics further paints a picture of spacing and wings/on-ball creators buttering the bread of success nowadays. For their bigs, the postseason usage rate is a tell-tale sign of letting the perimeter-oriented stars cook (Al Horford: 13.0 USG%, Robert Williams: 13.0%, Kevon Looney: 11.2%). Can the Suns rely upon Ayton to be a player who takes over 20% of their offensive possessions? If it’s a hit-or-miss proposition in their eyes, Ayton will be looking for greener pastures within the next six weeks.

As an elite finisher around the rim who also excels in pick-and-roll and pick-and-pop situations, Ayton already brings a rock solid baseline for a floor. When you add in his supreme athleticism for his position, it brings even more intrigue as a two-way force. Entering into his age-24 season in 2022-23, what’s the next step for Ayton? If there’s not much room left for Ayton on the developmental curve, a max contract shouldn’t be coming his way from Phoenix.

“I don’t think he’s so divisive here,” Suns owner Robert Sarver told BasketballNews.com in April about Ayton’s future in Phoenix. “I think he’s shown that he’s improved each year, helps us both on the defense and the offense. I think offensively, you see this year he’s taken another good step in terms of his touch and his ability to score around the basket. So, he’s been a key part of what we’re doing.”

Ayton averaged 17.3 points, 10.0 rebounds, 1.5 assists and 0.7 blocks for the Suns this past season. In an environment where he's more heavily featured, those numbers likely rise closer to 22-23 points and 12-13 rebounds per game. Is that the way to go though?

Welcome to the new evaluation process of great, non-transcendent bigs. Ayton is the first case study, and this expensive decision that's on the horizon is going to change the Suns’ future one way or another.