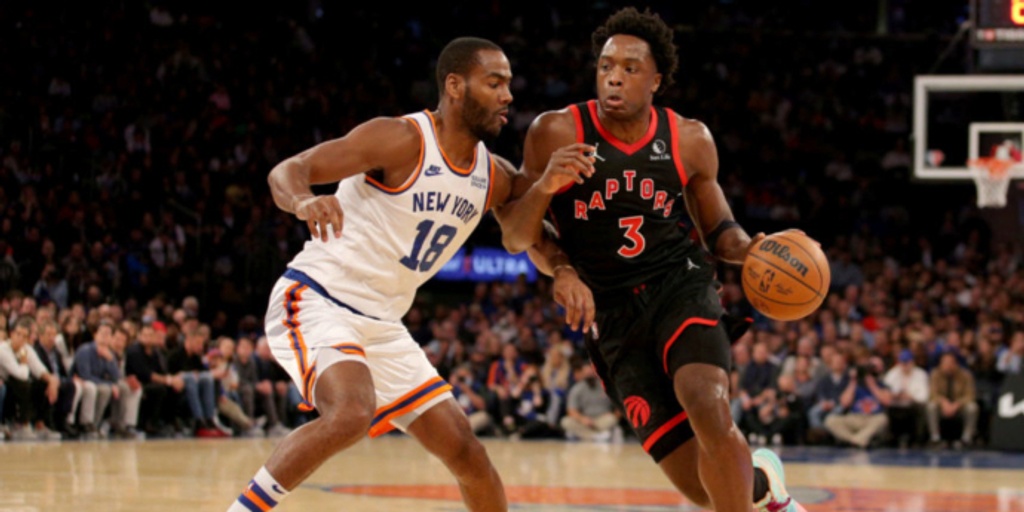 OG Anunoby was a popular candidate to make the vaunted Leap™ heading into this season. Raptor fans were excited about him for good reason. ESPN's Zach Lowe listed him as one of the most interesting players in the league. Heck, half of our staff — including yours truly — chose Anunoby as its Most Improved Player pick.

So it was a bit disheartening to see Anunoby kick things off with an 11-point performance on 3-of-17 shooting. It was even more disappointing to follow that up with 14 points on 4-of-17 shooting, though at least that one came in a victory.

It wasn't just the result (missed shots); the process seemed to be off. He was still trying to figure out how to leverage his strength as a higher-volume driver. Mix in the off-the-bounce jumpers he clearly emphasized during offseason work. Make more passing reads. All of this came while adjusting to life as the focal point of a defense.

The Raptors have bllitzed opponents by over 10 points per 100 possessions with Anunoby on the floor over this six-game stretch; during the Raptors' four-game winning streak, that number eclipses 12 points per 100.

There's plenty of season left for Anunoby, but he gave us an early candidate for his "I'm HERE" game on Monday, dropping a career-high 36 points in a win over the New York Knicks at Madison Square Garden.

We saw a mix of it all from Anunoby. He knocked down 4 of his 12 triples; an off night compared to his season averages (35.3% on 8.5 attempts). He sprinkled in an array of off-dribble jumpers from the mid-range area, showcasing a fluidity we only saw hints of last season:

There were the shoulder-chucking drives used to create space. Anunoby plays with a physicality that only a few wings in the league are comfortable with, much less equipped to deal with consistently. There have been counters added to his brute strength; his improving handle has allowed him to incorportate head-fakes and spins to get to his spots more effectively.

That ability, combined with the attention he draws as the (pigeon-holed) focal point of the offense opens up passing windows that didn't exist for him in the pass. It's nice to see a flash like this:

You won't confuse this with LeBronian manipulation, but it's a step up for Anunoby.

He surveys the court, peeping Julius Randle nudge his way to the right elbow. Anunoby sets up RJ Barrett (defending his tail off this year, by the way) with a jab before flowing into a right-to-left spin. Midway through his spin, he recognizes Derrick Rose committing to help, as well as Alec Burks trying to track two Raptors on an exchange.

You see the strength shine through — Rose has no chance at knocking this ball loose — as well as the quick processing, as Anunoby hits Gary Trent Jr. on his lift. Progress.

What's been impressive, in the Knicks game but also during the season as a whole, is how locked in Anunoby has remained as a defender despite his heightened offensive role. His work on Randle, particularly in the second half, was strong. He mirrored his drives, stayed disciplined against Randle's movement jumpers and absorbed whatever blows Randle tried to dish out.

Even when off-ball, Anunoby provided value as a helper in multiple contexts. At the nail; as the low-man; timely rotations underneath. This may have been my favorite possession from him on the night:

Yes, you're looking at aggressive help at the nail, a disciplined close-out and a strong contest in roughly four seconds. It's boring stuff, but it's effective. Aggressive, but controlled.

That's really what the Raptors want from Anunoby this season: aggressive, but controlled play. We know he can bring it defensively. He's smoothing out some of the rough edges offensively. It won't always be a 36-point night, but as long as the process is sound, nights like this will become more common.