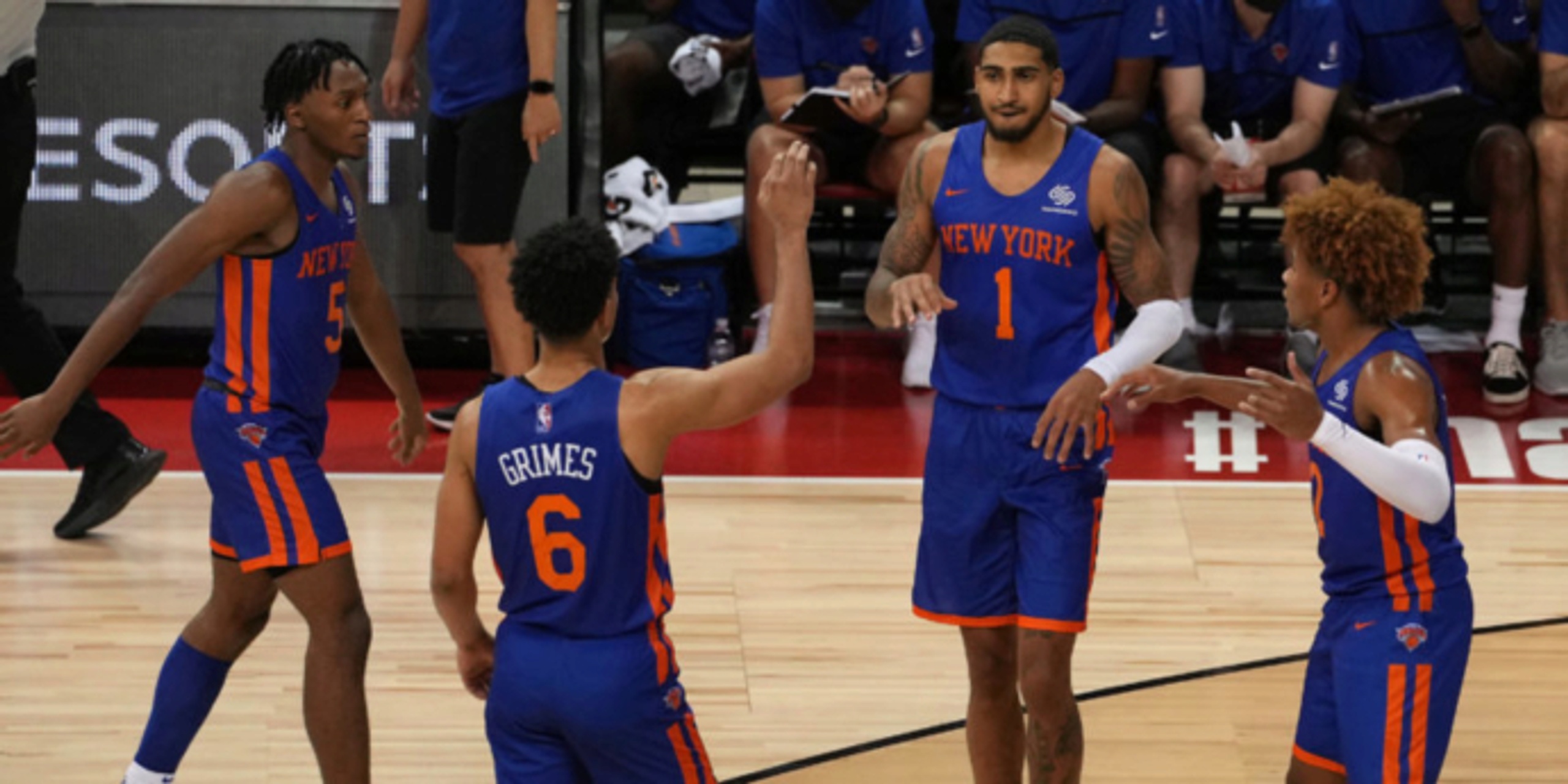 After a successful free-agency period, the Knicks contingent headed out West with the players they selected in the 2021 NBA Draft, as well as a few familiar faces from last season. And now that Las Vegas Summer League has wrapped up, let's take a look back at how each of the newest Knicks handled themselves under the glare of the Nevada heat.

After entering last month's draft with the No. 19 and No. 21 overall selections, New York had added only Grimes, the 25th overall pick, by the time the first round concluded. This drew the ire of some fans, as Grimes was projected to land somewhere in the second round, according to most mocks. However, one thing has become clear about the Knicks approach to draft day under Leon Rose and company — New York locks in on specific targets even if they are not necessarily regarded as elite prospects by pundits and prognosticators. Remember, the Knicks were heavily criticized after "reaching" for Immanuel Quickley with the same number pick last year.

Grimes didn't do much to quell concerns early, as he stumbled out of the gate. Over the Knicks' first three games, Grimes shot a combined 8-of-30 (26.6%) from the floor. However, Grimes located his stroke in Game 4, when he scored 15 points on 10 field goal attempts, and he closed out the summer session by showcasing the skills that earned him AAC Player of the Year honors as a junior at the University of Houston. Over New York's final two contests, Grimes averaged 27.0 points, 6.0 rebounds, 3.5 assists and 6.0 made three-pointers.

No. 25 pick Quentin Grimes (@qdotgrimes) cooks up 28 PTS and 6 triples in the @nyknicks #NBASummer win 👌 pic.twitter.com/29yYRzfcEL

And even in the early games in which his shot wasn't falling, Grimes didn't let his offensive struggles negatively impact his effort on the other end of the floor. He showed impressive defensive versatility, checking both shifty point guards and stocky small forwards. Grimes also finished second on the team in total rebounds, behind only Obi Toppin, and led all players in Vegas with a total of 22 made three-pointers (NY played a league-high six games). In a league that values 3-and-D wings, it appears Grimes can establish himself as a contributor sooner rather than later.

In his two years under Bob Huggins at West Virginia, Deuce McBride, whom the Knicks scooped him up with the No. 36 overall pick, earned a reputation as a feared perimeter defender. Those defensive instincts — along with his quick-twitch athleticism — were indeed on display in Vegas, where he hounded opposing guards all over the floor. McBride's relentless 94-feet-of-pressure defense undoubtedly brought a smile to even the typically-grumpy Tom Thibodeau, who was said to have fallen in love with Deuce during the pre-draft process and pushed hard for the Knicks to select the youngster out of WVU.

And, like Grimes, McBride was surprisingly impactful on both ends of the court. After two solid games to start, he caught fire in the second half of New York's third contest, when he poured in 20 points and was a perfect 6-of-6 from three-point range. Through three full games, McBride shot 62.5% from the floor, 61.5% from downtown and 87.5% from the FT line. In the Knicks' final contest, a blowout victory over Atlanta, not only did he put the clamps on highly-touted Hawks rookie Sharife Cooper (who had just six points on 3-of-11 shooting), McBride scored 19 points of his own on 7-of-10 shooting, including five made treys.

Over the six games New York played in Vegas, Deuce averaged 15.2 points, 3.5 rebounds, 3.5 assists and 3.0 made triples. He disrupted opponents' flow with his defensive intensity while also scoring efficiently on the other end.

"That's how I get my offense going," McBride said of his defense after Monday's victory. "It's really coming in, stopping guys and giving energy to the team and that gives me offensive opportunities."

When asked if he was satisfied with his performance in Vegas, McBride replied, "I thought I played well, but [I'm] never satisfied because that's when your opponents catch up. I had a pretty solid summer league, coming in to learn a whole new system. I did well in that, but there are a lot of things to improve on."

Yes, the Knicks suddenly have impressive depth in their backcourt, but if McBride can knock down long-range shots at a consistent clip, it will be very difficult for Thibs to keep him off the floor. Consider this: Of the 78 players who attempted at least 18 three-pointers at the 2021 Las Vegas Summer League, only three shot 50% or better from deep: No.1 pick Cade Cunningham, No. 2 pick Jalen Green and No. 36 pick Miles McBride.

Looking at the big picture, it's clear the Knicks' summer league coaching staff instructed their players to hunt three-point shots in Las Vegas. Among all the 30 teams in Vegas, New York ranked first in average three-point makes per game (14.2), first in three-point percentage (38%), and third in three-point attempts per game (37.2).

After playing limited minutes and struggling through most of his rookie campaign, Toppin encouragingly closed the 2020-21 season on a high note, providing New York with a much-needed spark in the team's first-round matchup with the Hawks. He built on that momentum in Vegas, excelling as a focal point of the Knicks' offensive attack.

Toppin was a force right from the start of their Vegas trip, scoring a game-high 24 points on 10-of-21 shooting to go along with 8 rebounds in his first contest. As a rookie last season, Obi was often relegated to standing in the corner or dunker's spot. However, in Las Vegas, Toppin had plenty of transition opportunities and was actively involved in pick-and-rolls, alley-oops, pick-and-pops, dribble hand-offs, etc. This was similar to how the Dayton Flyers deployed Obi during his sophomore season, when he led the country in dunks, averaged 20 points per game while shooting over 63% from the floor and was named the National Player of the Year.

In Vegas, Toppin led all summer league participants in minutes played, logging over 35 minutes per game, while averaging 21.0 points (on 44.5% shooting), 8.3 boards, 1.3 assists, 2.0 made treys and 1.3 steals. The only player in Vegas to average more than 20 points and more than 8 rebounds was Chicago's Patrick Williams, last year's No. 4 overall pick. Toppin became the first Knick to ever average 21-plus points in summer league action.

The question for Obi moving forward is how much playing time he'll see next season. Will Thibs look to reduce Julius Randle's workload after Randle led the NBA minutes played a season ago, or will Toppin get some time as a stretch 5 alongside Randle?

After a solid showing (15 points and 8 dimes) in his first contest, Quickley put on a show in Game 2, racking up a game-high 32 points (11-of-21 shooting) and dishing out a game-high 8 assists (vs. just one turnover). IQ scored 25 more points in the third game and averaged 24 points through New York's first three contests.

Yet, Quickley missed the Knicks' fifth game due to a sore groin and was woefully inefficient offensively over his final two appearances, shooting 7-of-36 from the floor. All told, IQ averaged 20.2 points, 7.8 assists, 3.8 rebounds, 1.4 steals and 2.4 three-pointers in Vegas. Although the shooting numbers were disappointing (33.7% from the floor and 24% from downtown), Quickley showed he might very well possess the patience and skills necessary to develop into an NBA point guard, which was a pleasant surprise. Time and time again, IQ successfully read ball screens, facilitated the offense and found open shooters, all while taking care of the basketball (averaging less than 2.5 turnovers per game).

It had been over a decade since a player averaged more than 20 points and 7 assists in the Las Vegas Summer League. (That player was John Wall for the Wizards in 2010.)

When the Knicks selected Sims with the third-last pick in July's draft, it was assumed the 6-foot-10 Texas product would spend the vast majority of the 2021-22 campaign toiling in the G League. Yet, after watching him in Vegas and getting an up-close look at his mind-boggling combination of size and athleticism, it seems possible Sims may earn some time with the big club in 2021-22.

His two best games came in his first and final summer league contests. In the opener, Sims was a perfect 6-of-6 from the floor (including this incredible alley-oop) for 12 points and pulled down 8 rebounds. In the finale, he ripped down 13 boards.

Go up and get it, Jericho Sims! ✈️#NBASummer on NBA TV pic.twitter.com/XrySfm1yXM

Over his five appearances, Sims converted 81% of his FG attempts while averaging 8.2 points, 8.2 rebounds and 1.0 blocks in 28.0 minutes. (The last rookie to attempt more than 20 total shots and shoot over 70% from the floor in Las Vegas was Rudy Gobert for the Jazz.)

If New York's center triumvirate of Mitchell Robinson, Nerlens Noel and Taj Gibson all remain healthy, it will be difficult for Sims to find minutes. Still, he's an excellent insurance policy. And one with some tantalizing upside.

Rokas relocates to the corner and hits the 3, then snags the steal from behind following some good D, and then takes it the other way for the lay in transition. pic.twitter.com/SoAm5MftEU

Jokubaitis, the lefty from Lithuania whom the Knicks nabbed with the 34th overall pick, appeared in only three games. He played sloppily in his Knicks debut, understandably looking a bit overwhelmed, but seemed far more comfortable in his final two appearances.

He warped up his Vegas experience scoring 19 points on 7-of-10 shooting, to go along with 4 rebounds, 4 assists, 3 treys and 4 steals in 29 minutes. Jokubaitis will spend next season getting extra seasoning overseas, suiting up for Barcelona in the ultra-competitive Spanish ACB League.

After struggling for Argentina in the Tokyo Olympics, Vildoza looked outclassed in Vegas. He went scoreless, missing all four of his FG attempts in his first two games before sitting out the rest of summer league with a sore foot.

Leon Rose signed Vildoza to a four-year, $13.6 million contract back in May, but the pact is non-guaranteed. The Knicks have until October 21, the day after the season opener, to release Vildoza, which would open up a roster spot and clear his $3.3 million salary off their cap sheet. Considering their backcourt depth, New York may opt to part ways with Vildoza and bring in a wing.

It was reported last week that the Knicks had agreed to terms on Dwayne Bacon after the Magic had waived him.