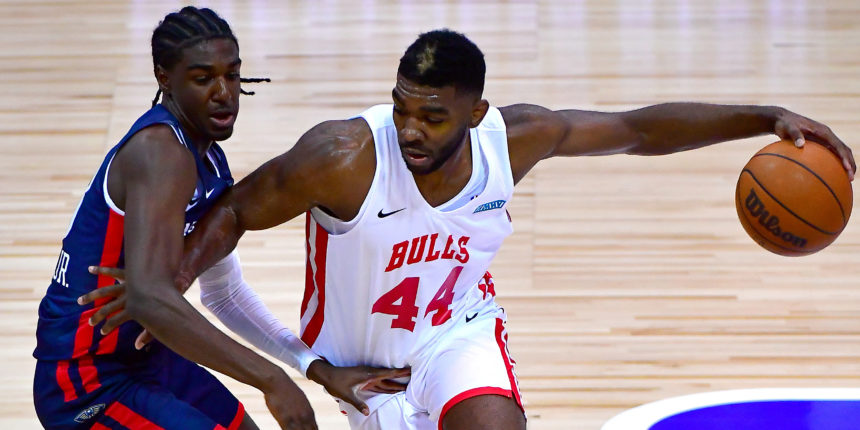 How the Bulls pushed Patrick Williams' offensive evolution in Vegas

Since March 25, the Chicago Bulls have built their roster into a true playoff contender. It started with a deadline pickup of Nikola Vucevic and has continued with the acquisitions of Lonzo Ball and DeMar DeRozan via sign and trade. Alex Caruso has come aboard as well, filling out a deep backcourt that will also include Zach LaVine, Coby White, rookie Ayo Dosunmu and summer league standout Devon Dotson.

Though the majority of those moves are significant changes coming from the outside, there has most definitely been internal growth over the offseason with this Chicago team. LaVine was able to capture gold in the Tokyo Olympics with the U.S. Men’s National Basketball Team, shooting a clean 60% from the field and nailing 45.5% of his threes. That kind of showing on the international stage has to be a welcome sight for a player coming off his best season as a pro.

Another exciting development for the Bulls, however, is the maturation of Patrick Williams, who took part in his first NBA Summer League last week in Las Vegas. Soon to be 20 years old, Williams is wise beyond his years, and accepted a role for Chicago’s summer league squad that he didn’t have as a rookie.

“He gets a chance to lead. He missed out on that last year,” Bulls assistant and summer league head coach Damian Cotter said after Chicago’s second game. “It's a different mindset, a different responsibility. I think it's wonderful. Coaching instituted sport teams back home and when you've got young teams like this, things can go wrong really quickly. And to have guys that are forced to lead — Pat's response from yesterday to today for the consistency of the game was a big step forward for him.”

For some context, Williams’ summer league debut didn’t go as planned. In 35 minutes, he scored just 15 points and was minus-24 in a loss to the Trey Murphy-led New Orleans Pelicans. Williams shot 30% from the field on 20 attempts. But the next contest went much better.

Williams looked comfortable and confident after getting his feet wet, scoring 30 points and grabbing seven rebounds in the process. He knocked down four threes, hit all six of his free throws and used his defensive prowess to help bring the Bulls back from a double-digit deficit in the first half and come out victorious against the San Antonio Spurs.

“Just getting reps, just trying to be as aggressive as I can. During the game, the game has a life of its own. You never know when it's gonna be your turn to step up and make plays and the ball will be in your hands,” Williams said following that win. “Last year, Zach sat out with COVID and guys had to step up. I sure hope it doesn't happen again this year, but [when] somebody's out, guys have to step up. But just getting reps at being aggressive, getting to my spots. I think it's just helpful for me now and this upcoming season as well, my future.

“The player that I want to be is a player that does this night-in, night-out. So just getting those reps at that, getting comfortable at that is just nothing but good for me."

In that particular stint, Williams attempted a game-high 23 field goals and cashed in on 10 of them. He didn’t take more than 14 in a single contest as a rookie.

“I think that just speaks to this team [and] how much they trust me,” Williams said. “They're constantly telling me to shoot more still. I don't even know how many shots I shot today, but for me of course, it's not in my personality to be super aggressive and do this. But that's why I'm out here, to kinda help mold that into my game forever, honestly. That just speaks to how much they trust me and how much they think of me and my game. I'm telling them to shoot more as well 'cause they've been making great plays.”

A near-40% perimeter shooter last season, Williams carried over his ability to knock down the three into Vegas with a 7-for-16 showing over a trio of games, most of which came from catch-and-shoot opportunities. And while the third contest didn’t quite go as well on the offensive end of the floor, he still managed to impose his will as a stout defender with his bulky frame. He also flashed an element of his game that we didn’t see much of in year one: working on the block and in the post.

“That was a big area that I worked on this summer for sure. Just with my size and my strength and my athleticism, being able to get to my spots and also adding that spot,” Williams said. “A lot of guys that I kinda model my game after because I watch a lot [of film], they get to that spot and they're able to play from that spot and make plays from that spot — whether it's scoring, passing or whatever."

Williams often caught the ball on the left block, either facing up for mid-rangers or jab-stepping and driving past his opponent with his left hand. He was able to finish many of those plays, some more ferociously than others.

“Of course, we have some guys on the team who get to that spot as well, thinking of Vuc, thinking of Zach getting to that spot as well sometimes when he gets cut off. Especially [since] last year, they've been telling me that can be one of my spots because they get there and they realize that I can get there as well. I've just been working on that this summer, me and the coaching staff, and they definitely feel comfortable with me there and I feel comfortable there as well. So I'm excited to have added that to my game."

As for the downside, Williams did not have much luck on fastbreaks. According to InStat, Williams scored zero points on nine transition possessions. He also turned the ball over 14 times total in three games.

The Bulls realize he still has a ways to go in his process of becoming the contributor he wants to be, and that’s why Cotter purposely called his number in the post last week to help Williams gain some confidence as a scoring presence.

As for his role with a revamped Chicago group as a sophomore, Cotter sees Williams playing a similar part as he did when he was a rookie.

“He'll get responsibilities defensively. He's gonna have to find different ways to score than what he does here,” Cotter said. “Getting out and running the lane, that's something he's gonna have to do more effectively going forward. He understands that, and we've just gotta keep growing his game. We love to win summer league games, but what trumps that is development.

“[Tuesday night] was a good game for Pat, another step forward just evolving his offense. He seems pretty comfortable with some post-ups. So who knows where he'll go from here."

Williams finished summer league averaging 21.0 points, 9.7 rebounds and 2.7 assists per game. The second-year forward will likely be an X-factor for a Bulls bunch with high aspirations, and it’ll be intriguing to see how Williams responds.