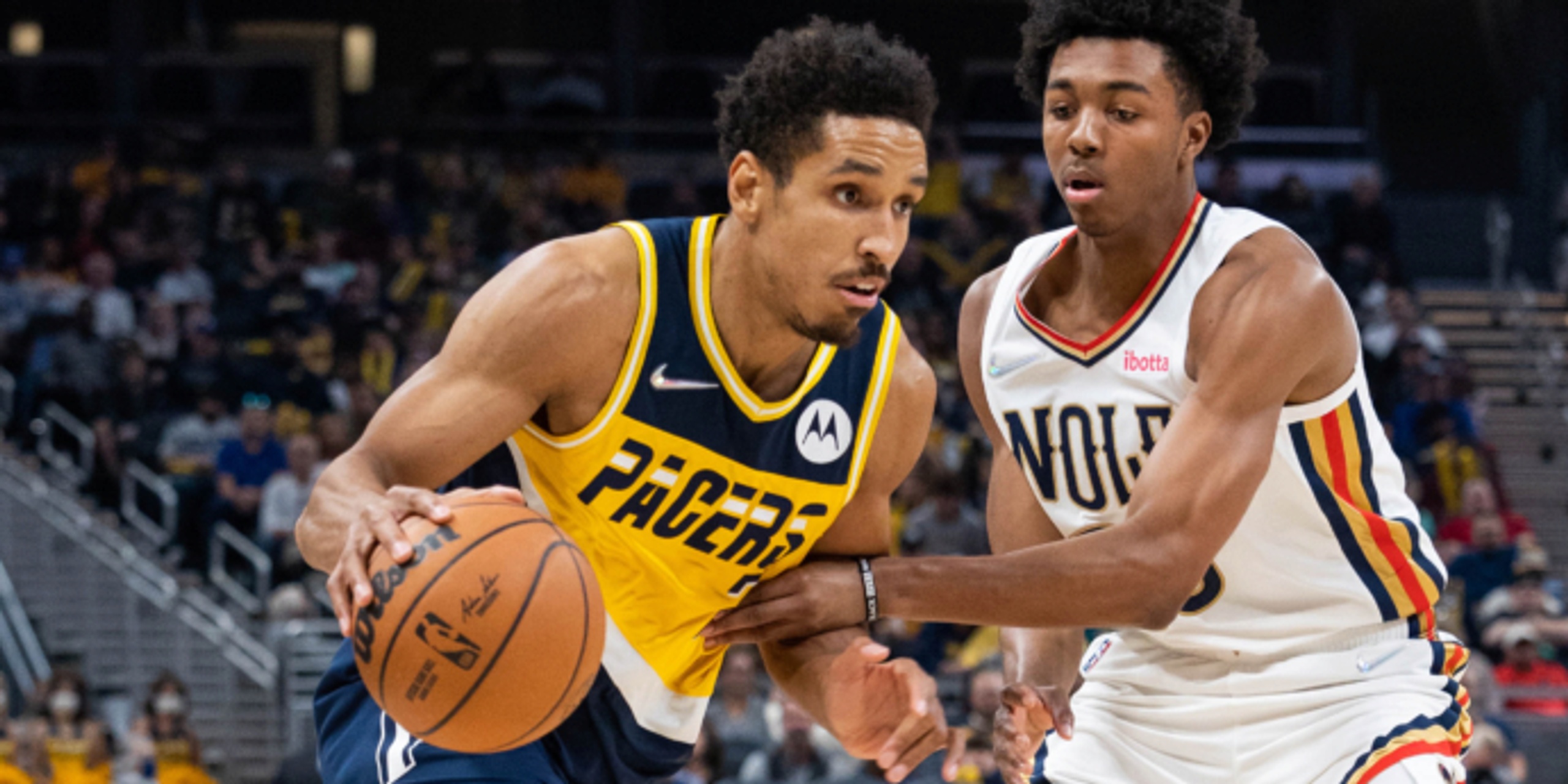 The 2022 NBA Draft is one day away, and rumors are surfacing left and right.

Which teams have been the most aggressive in trade talks? Will any notable players be on the move? Which draft picks could be dealt? BasketballNews has compiled all of the biggest rumors:

All signs point to the Indiana Pacers trading Malcolm Brogdon this week. Not only has Brogdon surfaced in trade rumors more than any other player, ESPN’s Adrian Wojnarowski recently reported that teams like the Washington Wizards and New York Knicks are expected to pivot to Brogdon trade negotiations if they can’t move up to No. 4 for Purdue’s Jaden Ivey.

The Ringer’s Kevin O’Connor reported that the Pacers were throwing the veteran guard into every trade discussion they were having.

On The Lowe Post, ESPN’s Jonathan Givony mentioned that the Los Angeles Lakers offered the following package for Brogdon: Russell Westbrook, Talen Horton-Tucker and a future first-round pick in 2027. Givony said that the Pacers immediately declined the Lakers’ offer. Lowe also threw in that he’s heard Brogdon and Myles Turner are “coveted” around the league.

The Charlotte Hornets are prioritizing salary-cap flexibility in order to re-sign Miles Bridges, according to ESPN's Brian Windhorst. The Indiana Pacers and Detroit Pistons are also worth monitoring as potential suitors for Bridges, per Bleacher Report's Jake Fischer.

With the Hornets prioritizing Bridges, Gordon Hayward’s future in Charlotte is certainly in flux. Windhorst said that the Hornets are looking to find a team that's willing to take on the final two years of Hayward’s contract. As an incentive, Charlotte is reportedly willing to throw in one of their first-round picks (No. 13 or No. 15). We'll see if any teams pounce at the opportunity to land Hayward and a lottery pick.

With the hope of shedding salary to keep Bridges alongside LaMelo Ball, the Hornets seem poised to make a big move this week.

Hawks have been aggressive

There have been a ton of Hawks-related rumors of late. On Monday night, Wojnarowski appeared on SportsCenter and said that Atlanta has been aggressive in trying to find a star to pair with Trae Young.

John Collins has surfaced in a number of trade rumors as well. The Hawks have had talks with the Sacramento Kings about a potential Collins deal, according to The Athletic's Shams Charania.

Versatile wing Bogdan Bogdanovic is also drawing interest from teams, per Windhorst. Atlanta has offers on the table for Collins and Bogdanovic.

Bleacher Report’s Jake Fischer also shared an interesting Hawks nugget during his live podcast on Tuesday: Atlanta is trying to move up from No. 16 overall into the lottery, with their primary target being G League Ignite playmaker Dyson Daniels. Fischer said that the Portland Trail Blazers at No. 7 could be a potential team to monitor as Atlanta continues to pursue Daniels.

It's possible we could see an explosive draft night from the Hawks. They are weighing multiple moves, and the front office views Young and De’Andre Hunter as the only untouchable assets, per Woj.

The Philadelphia 76ers could be a team to watch this offseason. Not only do they have an important long-term decision to make on James Harden, they also have a number of players who could be viewed as available. Keith Pompey of The Philadelphia Inquirer dropped multiple tidbits on the Sixers’ plans.

After PJ Tucker declined his player option with the Miami Heat, Philadelphia and the veteran forward have mutual interest. In order to create cap space, the Sixers are looking to deal Matisse Thybulle and the No. 23 pick in a three-team deal.

Pompey added that Philadelphia is trying their best to offload Tobias Harris’ large contract, but it's been tough to find any potential suitors.

Finally, there's another Houston Rocket who could potentially reunite with Harden in Philadelphia. The Sixers and Phoenix Suns have expressed interest in Eric Gordon, per Windhorst on NBA Today.

It sounds like Daryl Morey is trying to get the band back together, with Gordon and Tucker running it back with Harden in the Eastern Conference.

Knicks have been very active

As previously mentioned, the New York Knicks are showing interest in Brogdon. In addition to Wojnarowski's report, we've seen similar intel from The Athletic’s Shams Charania and SNY’s Ian Begley. Outside of Brogdon, are there any other targets on the board?

Begley reported on KnicksFanTV that New York recently offered the Sacramento Kings multiple future first-round picks to move up to No. 4 for Jaden Ivey. The Knicks view Ivey in a high regard, and are willing to pay a steep price to move up seven spots in the draft.

The Knicks have also had talks with the Detroit Pistons about acquiring the No. 5 overall pick, and Cam Reddish was included in those discussions, per Begley.

It certainly seems like New York is trying to make a splash.

According to O’Connor on The Mismatch, the Detroit Pistons and Atlanta Hawks are the main teams to monitor as it relates to Deandre Ayton’s upcoming restricted free agency. Ayton could still stay with Phoenix, but Detroit and Atlanta will be among the teams pursuing the 23-year-old center.

Do the Suns actually view Ayton as a max-level player? If not, perhaps the Suns will try to get creative and explore sign-and-trade packages revolving around Ayton. Detroit and Atlanta have some intriguing assets that could make a deal worth it from the Suns’ perspective (although the Pistons could also try to sign Ayton using their cap space).

During Tuesday’s episode of The Mismatch, O'Connor also mentioned that the Minnesota Timberwolves have registered interest in Rudy Gobert and Clint Capela. This lines up with a previous report from Charania that Minnesota had inquired about Capela.

Where there’s smoke, there’s usually fire. So, are the Timberwolves really about to make Karl-Anthony Towns a full-time power forward? If the plan is to make a big move for a veteran center, moving one of the best shooting bigs of all-time further to the perimeter is an interesting thought.

According to Basketball Reference, Towns played 100% of his minutes at center last season. In fact, the only time he has played power forward throughout his NBA career was during his rookie season in 2015-16, when 2% of his minutes came at the 4.

The more you think about it, the more a Towns-Gobert frontcourt is certainly intriguing though.

John Wall expected to get bought out?

The Houston Rockets and John Wall will work toward finalizing a buyout before free agency begins, according to Fischer on his latest podcast.

After Wall opted in to his $47.3 million player option, there were questions about what's next for the point guard. This is the final year of Wall's contract, which could make it easier for the two sides to reach a buyout agreement.

If Wall hits the open market, could regain his form on a contender (potentially signing for the mid-level exception or less)? Wall averaged 20.6 points and 6.9 assists for Houston during the 2020-21 season, but he hasn't set foot on an NBA court since April of 2021.

Cavaliers open to trading No. 14 pick

According to HoopsHype’s Michael Scotto, the Cleveland Cavaliers are open to trading back from the final slot in the lottery at No. 14 overall. The Minnesota Timberwolves, Memphis Grizzlies and Milwaukee Bucks are among the teams who have already called the Cavs about the pick, per Scotto.

It's interesting that the Grizzlies and Bucks — two legitimate contenders — trying to move up 10-plus spots on Thursday night. It's unclear who these teams are targeting, but our Senior NBA Draft Analyst Matt Babcock currently has Ousmane Dieng projected at No. 14 overall. Rumors have been flying that Dieng has a guarantee, per Babcock, and he did receive an invite to the green room.

According to SNY’s Ian Begley, the Miami Heat have checked in on the availability of Jerami Grant. The Detroit Pistons have been openly shopping Grant for a while, so perhaps a deal will finally go down this week.

Grizzlies attempting to move up

Reaffirming the Grizzlies’ desires of trading up on Thursday, Zach Lowe mentioned on The Lowe Post that Memphis' executives are “calling in every direction.”

If that’s not a sign that the Grizzlies are expected to be very active on Thursday, I don’t know what to tell you. Memphis has a history of being active on draft night, and it seems this year won’t be any different.

Are the Suns willing to pay the luxury tax?

Recently, many national pundits have suggested that the Phoenix Suns are hesitant to go deep into the luxury tax. However, Suns owner Robert Sarver recently told BasketballNews that Phoenix has no qualms about paying up in order to keep this team together long-term.

“My position for a market like us with the tax is, if you get yourself where you can compete at the highest level, then you pay it and you go for it,” Sarver said.

“I’m not saying we’re in a market that can be in it 10 years in a row," Sarver added. "But when you get to a certain level where you have a chance to compete and you’re a top-four, top-six, top-eight team, if you’re at the level where you have a legitimate chance to compete — get to your Conference Finals and maybe win a championship — then I think you go in the tax, you pay and you do what you gotta do."

Sarver knows that the Suns’ championship window is in the here and now. Barring a change of heart, it seems that he's willing to spend to keep this core together.

“You just can’t take success for grant,” Sarver said. “It can come and go.”

Also, keep an eye on the Suns trying to add a pick in Thursday's draft. While they have no picks at the moment, Phoenix is making calls and trying to buy a second-round selection, according to 98.7 FM’s John Gambadoro. Gambadoro said that the Orlando Magic, Oklahoma City Thunder, Minnesota Timberwolves and Golden State Warriors are teams who are open to trading their second-rounders.

Dyson Daniels has one of the biggest risers during the NBA pre-draft process. On BasketballNews' latest mock draft, Babcock has Daniels being selected No. 8 overall by the New Orleans Pelicans.

“After being at the NBA Global Academy in Canberra, Australia, Dyson Daniels had a terrific season for the G League Ignite," Babcock said of Daniels. "The 6-foot-7 positionless Swiss army knife, Daniels excels at getting downhill and attacking the basket, relying on his athleticism and body control for finishing while occasionally employing a floater. Daniels’ outside shooting is still a work in progress, but he is a disruptive defender with quick feet and instincts. Daniels’ progression as a playmaker was also notable during the G League season. He seems to have a bright future ahead of him.”

According to The Athletic’s Bob Kravitz, Daniels blew away the Indiana Pacers’ front office in his recent workout in Indianapolis.

“I was told Dyson Daniels had one of the greatest workouts a lot of people in the Indiana organization have ever seen,” Kravitz said on ESPN 107.5 FM on Tuesday.

With the Pacers selecting at No. 6 overall, their hope is that somehow one of Jaden Ivey or Keegan Murray slips. If not, Kravitz said the Pacers will be deciding between Daniels and Arizona wing Bennedict Mathurin.

Stay tuned to BasketballNews.com for all the latest NBA news and rumors during what could be a crazy offseason. Also, check out our 2022 NBA Draft page for all of our in-depth draft coverage.