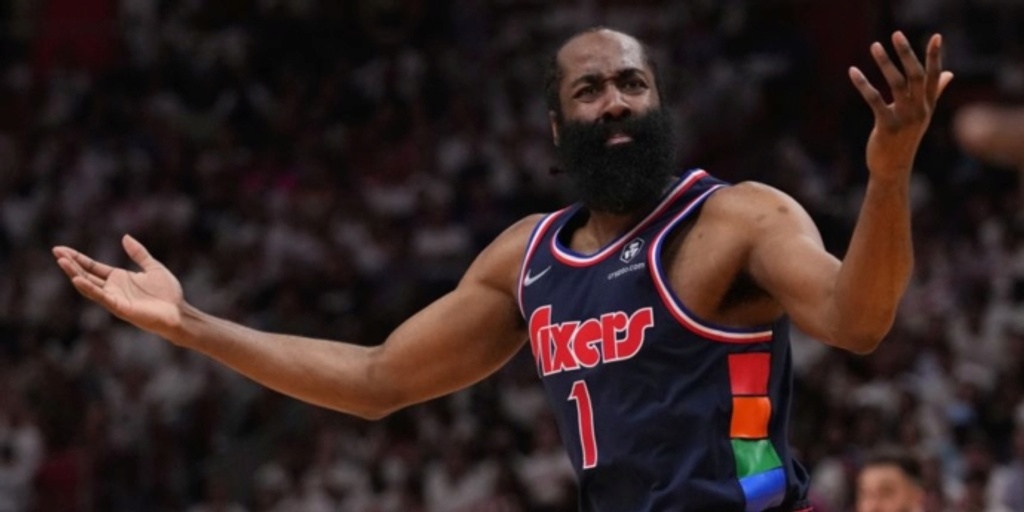 Giving James Harden a max contract could cripple the Sixers

After the Philadelphia 76ers were eliminated from the 2022 NBA Playoffs on Thursday night, Joel Embiid was asked about the disappointing play of James Harden, who finished with just 11 points, 9 assists and 4 rebounds. Embiid, who is never afraid to speak candidly, replied: "I'm sure since we got him, everybody expected the Houston James Harden, but that's not who he is anymore."

It's through that pragmatic prism that the Sixers and president of basketball operations Daryl Morey must approach the most pressing offseason issue in Philadelphia: How much is Harden worth?

Make no mistake, Harden is still an elite NBA player. In the 21 regular-season games he played for Philly after arriving in the blockbuster deal with Brooklyn, he averaged 21.0 points, 10.5 assists, 7.1 assists, 2.2 treys and 1.2 steals. The only other players to average at least 20/7/7 over the second half of the season were Kevin Durant, Luka Doncic, Dejounte Murray and Nikola Jokic.

However, Harden's numbers dipped in the postseason when he posted 18.6 points, 8.6 dimes and 5.7 boards per game, while shooting below 41% from the floor. He also averaged 4.2 turnovers. The Beard all but disappeared in Thursday's season-ending loss, taking just two shots over the entire second half.

(It's worth noting that the relationship between Ben Simmons and the Sixers fractured after the team and city seemed to pin last year's loss to the Atlanta Hawks on Simmons, who sinfully passed up an open lay-up. Yet, in that Game 7 loss to Atlanta, Simmons finished with 5 points, 13 assists, 8 rebounds and just 2 turnovers, to go along with a +1 plus/minus. In Game 6 on Thursday, Harden finished with 11 points, 9 assists, 4 rebounds and was -16. Simmons made one shot in the second half of Game 7, or one more than Harden in Game 6).

Watching him this past season, it became abundantly clear that Harden didn't have the same explosive first step that made him arguably the league's most lethal offensive weapon at the peak of his prime. (Harden has scored more points than anyone in the league over the past decade and is the last player not named Giannis or Nikola to win an MVP award).

When asked if he plans to stay in Philadelphia, Harden gave a short response.

"I'll be here," Harden declared, adding that he would do "whatever it takes to help this team continue to grow."

Here's an annual breakdown of what that max contract would look like:

Summing it all up, that brings the five-year total to a mind-boggling $270+ million, which would be the largest contract in NBA history.

Harden will turn 33 in August and will celebrate his 37th birthday before the start of the 2026-27 season. Recently, we've seen players such as LeBron James and Chris Paul play at an extremely high level on the wrong side of 35, but it's crucial to remember that those athletic freaks are the exceptions to the rule. Most players begin to break down in their mid-30s. Over the last two seasons, Harden has missed 39 games due primarily to nagging hamstring issues.

Committing to pay Harden north of $60 million at age-37 would be a nightmare, bordering on organizational malpractice. But would Harden be willing to meet the Sixers halfway, or might he dig in and back Morey into a corner? Considering all that the Sixers gave up to acquire him (Simmons, Seth Curry, Andre Drummond and two future first-round picks), Philly can't afford to let Harden leave via free agency. Even if Harden walked out the door in July, the Sixers would still have more than $105 million in salary on the books for next season. Wasting the window of Embiid's prime would be catastrophic to the franchise.

If Harden did opt-out, he would be an unrestricted free agent and could sign a four-year deal with another club for roughly $200 million. However, only three clubs (Detroit, Orlando and San Antonio) are projected to have significant cap space, and it's doubtful any of the three would be interested in maxing out Harden (and it seems unlikely that The Beard would have any interest in joining a rebuilding team).

The Sixers could explore some sign-and-trade or extend-and-trade possibilities (the Los Angeles Lakers could make some sense for all parties involved), but that would require Harden agreeing to join his fourth team in the past 24 months.

The ideal scenario for Philly is bringing back Harden at a reasonable rate. On "The Athletic NBA Show" podcast earlier this month, reporter Sam Amick stated that Harden might be willing to sign for less than the max.

"When the Sixers got him, their intel was that he would potentially be willing to take less," Amick said. "And obviously, you know, nobody knows him better than Daryl."

The critical question, of course, is how much less is Harden willing to take?

For the Sixers, they have to look forward, not back. As Embiid sagely explained, "Everybody expected the Houston James Harden, but that's not who he is anymore." Morey and Co. have to determine how much Harden will be worth over the next five years based on the current version of The Beard, not what he would have been worth had he hit the open market three years ago.

All of this makes for a very interesting and unpredictable summer in the City of Brotherly Love.