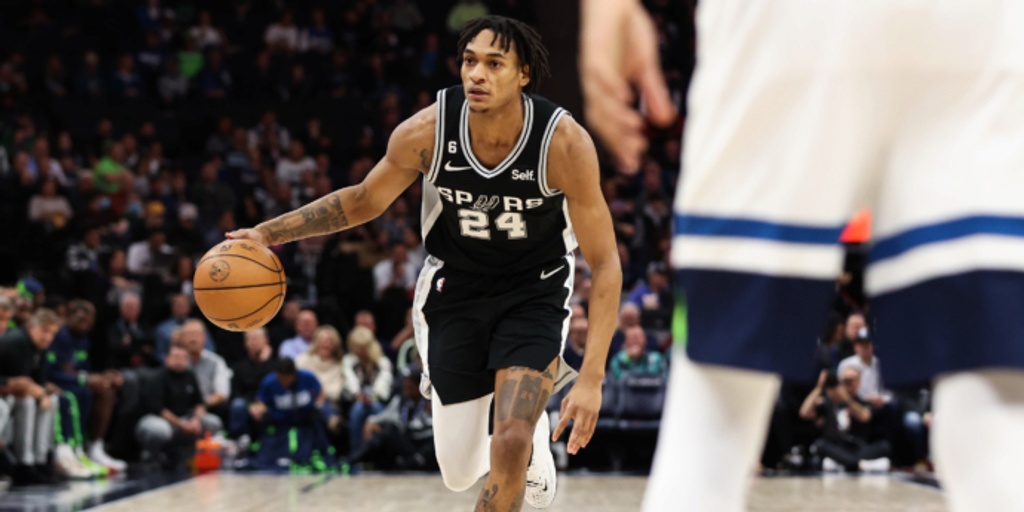 NBA Stats Notebook: 5 players who can sustain their early breakouts

It's admittedly fun to ride the small-sample-sized wave of early NBA seasons.

We've already witnessed 58 individual 30-plus-point performances in eight days of action from dozens of different players. The Utah Jazz and Portland Trail Blazers are tied with the Memphis Grizzlies atop the Western Conference standings. And early breakout games have dotted the league's landscape, making fans of all 30 teams (well...) hopeful for what could be on the horizon.

But while it's encouraged to enjoy success in the moment, as analysts, how do we temper expectations and forecast the future? Some players are bound to return to earth, while for others, this first week might truly be the start of something special.

Here are five players who have caught fire so far, and whose environments make sustaining these heat waves a plausible reality:

We start with everyone's favorite "What the heck is happening right now?" team in the Jazz, who are 4-1 despite being a projected basement-dweller/Victor Wembanyama suitor/whatever you'd like to tactfully call a bad basketball team.

Markkanen turned heads at the end of the summer with his EuroBasket onslaught for Finland. We saw the 25-year-old in a primary scoring role during the tournament, and that's sort of translated to Utah. Markkanen's usage rate (22.6%) and drives per game (6.0) are his highest figures since 2018-19. He's making a stunning 68.4% of his shots when he drives to the basket — bound to recede, but definitely a positive sign when you look at the above footage.

And yet! He's also been used creatively without having to be individually creative, as highlighted by Mat Issa:

And while he has made some strides as a self-generated scorer, he's doing a lot of his damage playing off of his teammates as a shooter, roller, and cutter.

Regardless of how the Jazz progress as a team, Markkanen is going to be a featured player barring any sort of trade. He's also an easy bet to return to form as a perimeter shooter. Markkanen currently sports a 29.2% clip on catch-and-shoot threes; he typically hovers around 35%.

There's no one standing in the way of Markkanen leading the Jazz in shot attempts, and he's shown signs that he can take on such a responsibility.

A literally perfect, 22-point, 8-for-8 shooting effort from Murphy helped the Pelicans win a game against the Dallas Mavericks without Zion Williamson, Brandon Ingram and Herb Jones. The second-year forward is shooting a lights-out 68.4% from long range and re-establishing himself as a premier young shooting talent in the league.

However, it's been his aggression attacking closeouts that has really helped Murphy propel his offensive game forward.

We all know Trey Murphy is an amazing shooter. But him attacking closeouts like this is going to make him incredibly deadly pic.twitter.com/AmJd9RiGfw

Murphy explained to me this summer that he's really worked on anticipating and absorbing contact. That showed up in NBA Summer League, and it's manifesting so far as you can see in the above clips. Murphy is only 3-for-8 on driving attempts so far, but that's already better than his abysmal 21.4% rate as a rookie. He's also been one of the most frequent transition finishers in the NBA, and is even averaging a league-best 1.92 points per possession in transition.

New Orleans hasn't gotten out and running too much, but they project as a team that can capitalize on fast breaks. Murphy is an improved at-rim finisher and can always leak out for threes. It makes him yet another unique weapon for the Pelicans' offense.

Want to talk about a dark-horse candidate for Sixth Man of the Year? Nowell is putting up 16.2 points in just 21.8 minutes per game for the Timberwolves and has effectively filled Malik Beasley's spot in the rotation. The 23-year-old is knocking down just 32.1% of his threes, but he's a proven threat from distance who I expect to improve.

Mark Schindler has been all over the Jaylen Nowell breakout for practically the entire calendar year, so both deserve their flowers:

The third-year guard is prolific in the short-mid-range areas like above; this year, he's made a ridiculous (and unsustainable) 62% of his total mid-range looks. But he's been trading some of those shots in and getting even closer to the basket. Per Cleaning the Glass, Nowell's short-mid-range shot frequency has dropped by 12%, while his at-rim rate has climbed by 13%. That's a great sign since he's a capable scorer in both zones.

Nowell's per-game scoring average is fourth among NBA players with multiple games off the bench. The three in front? Christian Wood (a probably eventual starter), Bennedict Mathurin (a rookie and probable eventual starter) and Keegan Murray (same boat as Mathurin). It's entirely plausible that by the end of the year, this three-level bucket-getter emerges as a leading contender for the Sixth Man of the Year award.

A third-year center and former second-round pick, Richards has grinded away as a reserve for a Hornets team desperately in need of stopgaps in the frontcourt. Through four contests, he's averaging 13.0 points and 7.8 rebounds per game on a crisp 71.4% field goal clip (all twos).

According to Second Spectrum, Richards has either grabbed an offensive board or tipped one to a teammate on two-thirds of his offensive rebound chances — tied for fourth-best in the NBA among high-volume rebounders.

Within that pristine field goal percentage, Richards is 8-for-9 in scoring chances as a roll man. Now, we're really digging into some small samples here. But he's shooting 78% at the rim in total, which lines up with 75% from last year, and some of the plays look promising. Nothing too crazy, but Richards has finished with soft touch and some power over two of the better interior defenders in the league in Clint Capela and Jakob Poeltl:

Richards' success is the most extreme small-sample-size bet in this notebook. He just has barely seen an NBA floor, so even looking at past seasons gets sketchy. I'm optimistic for two reasons: Charlotte has an obvious hole he is filling at center, and the team has some elite guard playmakers in LaMelo Ball and Terry Rozier who he can work off of.

Like Markkanen and the Jazz, Vassell and the Spurs are unburdened by expectations, which hopefully gives them the freedom to experiement throughout the season. Fans of the 2020 No. 11 pick have waited for Vassell's glimpses of pull-up prowess and overall scoring to coalesce, and 2022-23 might be the year.

Vassell is putting up 19.8 points, 5.0 rebounds and 4.5 assists per game while firing threes at a career-high volume (8.3 per game) and efficiency (39.4%). The long-range marksmanship has come and gone in waves, and yes, it's probably too early to assume Vassell has fully arrived as a pull-up powerhouse.

However, there's still a lot to love about his start — especially that assist number.

Vassell's 19.6% assist rate more than doubles either of his prior two seasons, while his 5.2% turnover rate is actually a career-low. There are 72 NBA players averaging more than 8 drives per game this season; Vassell's 15.9% assist rate on drives ranks ninth.

He's not some highlight-reel passer, but Vassell displays some really impressive floor vision. He can enter a drive in attack mode and still have the wherewithal to monitor how the defense shifts and how his own teammates get open.

Vassell is off to a shaky start as a driving scorer — he's made just 28.6% of said shots — but he has a past history with better efficiency. I bank on that returning, and, coupled with his improving vision and enticing perimeter scoring, Vassell could really terrify opposing defenses as a young playmaking engine.

Bennedict Mathurin is only the fifth NBA player since 1980 to score at least 72 points in his first three career games—and the first since 1995:

17 teams in the league had 2 or 3 "homegrown" starters in their opening game last week.
6 teams had 4.
3 teams had 0.
There are 8 players who made their NBA debut with the Lakers who are starting for somebody else this year, more than any other team. pic.twitter.com/Kl9Qg0Oa0j