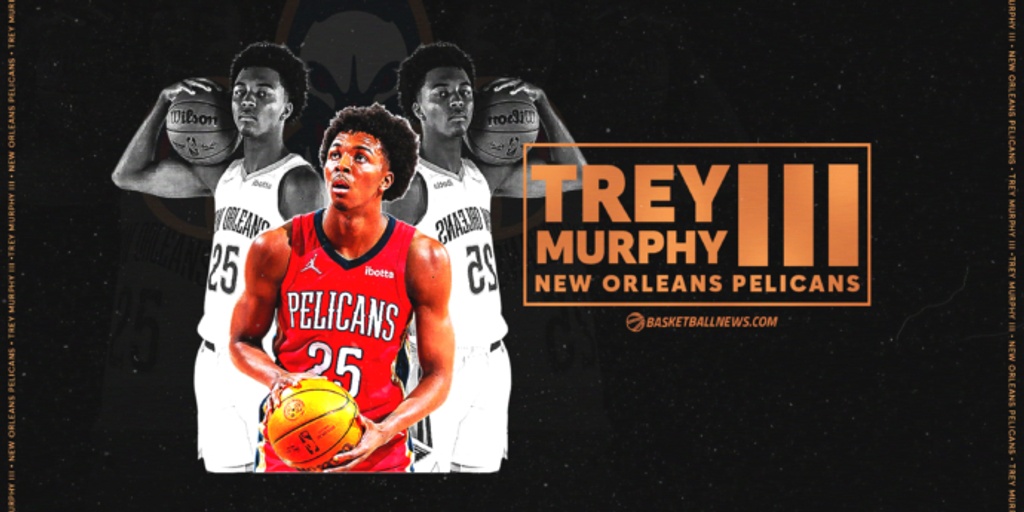 When the New Orleans Pelicans swung a deal for CJ McCollum ahead of last February's trade deadline, they acquired a dynamic scorer with a gravitational on-court presence and eight seasons of playoff experience. They also added a rising star in sports media.

McCollum majored in journalism as a student at Lehigh and has coupled his basketball ascension with a developing on-air platform, most recently joining ESPN as an analyst. He has spearheaded a rush of current and former NBA players taking their voices to the airwaves.

"We've definitely had a few conversations [about media]," Murphy told Basketball News in a phone interview. "That's what I want to do after I'm done playing basketball, you know, staying close to the game as well as showing my personality. I feel like I have a pretty good personality; I'm able to speak well, speak intelligently and add a little humor to it. So I'll be able to do that and still get a nice little paycheck and stay close to the game."

Murphy has envisioned a career in sports media since he was in high school. Back then, he was a two-star recruit with limited interest from colleges, so there was no guarantee that he'd be able to go pro. However, after excelling at Rice and Virginia, he parlayed that growth all the way to first-round-pick status.

The 22-year-old plans to have a long and successful NBA career, but he's also determined to sharpen his skills behind the microphone along the way.

During the 2022 NBA Draft, Murphy patrolled the red carpet, interviewed some of the incoming rookies and even cited some inside sources while revealing the Pelicans' plan to select Dyson Daniels.

WARNING: If you're a Kendrick fan, this does not go well. 😅 pic.twitter.com/8zQZkkI8i6

He watches "almost every episode" of J.J. Redick's podcast, "The Old Man and the Three." He also has "The Draymond Green Show," "Knuckleheads with Quentin Richardson and Darius Miles," "The ETCs with Kevin Durant" and "The Longshot Podcast with Duncan Robinson" in his rotation.

For Murphy, listening to pros discuss the game isn't just about supporting players in the media — it's also on-demand access to details and insight from athletes who have made a career in the league.

"Watching [Redick's podcast], especially, coming into the league, is almost like free game, and you're just listening to everybody's different perspectives and things that they learned while they were in the league," Murphy said. "So, it makes it a little bit easier for me. It's like I can learn from them, and I don't have to take these lumps that they probably took before they actually learned their lessons."

Of course, Murphy will attest that he took his fair share of lumps as a rookie. The 6-foot-10 forward spent much of last winter on the fringes of the Pelicans' rotation, and it took a mental toll. After one contest against the Miami Heat, a trainer took Murphy aside and told him that he needed to get back to being himself and focus on consistency in his work.

"Those times when I was struggling [and] wasn't playing a lot — that's when I really learned a lot about myself and just staying the course, because the NBA is so much of a mental aspect and a mental game that you have to worry about," Murphy said. "You could be doing a lot of good stuff physically and on the court, but if your mentals aren't right, there's gonna be a lot of stuff that's happening that won't affect you in a positive way...

"At the end of the day, we're all human. And I'll say, those times at my lows, I definitely chose some negative emotions — nothing outward enough to hurt the team, but definitely enough to where you can see I wasn't happy. And I feel like if you want to be a great player in this league, you can't just be happy with sitting on the bench, and I wasn't. I felt I could contribute. I felt I could help my team win, and I wasn't able to do that, and, you know, it hurt me a little bit. But they were just saying, 'Just stay the course [and] keep working.'"

Murphy leaned on the Pelicans' coaching staff, including head coach Willie Green and assistants Corey Brewer, Teresa Weatherspoon and Brandon Demas. He stayed consistent, and when his opportunity came in the spring, Murphy maximized it.

Between March and April, Murphy's playing time nearly doubled from the previous two months. He averaged 9.7 points and 3.4 rebounds in 19.5 minutes per game after March 9, while shooting 43.8% from beyond the arc. And this wasn't in the waning months of a losing season — New Orleans was in the thick of the Play-In-Tournament race. The team went 9-6 from March 9 onward, won both of their Play-In contests, and even pushed the top-seeded Phoenix Suns to six games in the first round of the playoffs.

"That was really special," he said. "It made those tough times in the beginning of the season and the middle of the season just so much sweeter."

One reason for the Pelicans' success — even through a 3-16 start, the loss of Zion Williamson, a midseason blockbuster and the trials of inexperience — was that they enjoyed each other's company. Murphy says the team struck a balance between serious and fun. When the group wasn't working hard and competing at a high level, they were teasing each other and having a good time together. Murphy credits Brandon Ingram, in particular, for setting the right tone as a leader.

"You could just see [Ingram] cares about a lot of people. He asks us for advice at times, he tells us things that we need to do. He shows caring ways as well by, you know, [giving] gifts or just being there for people. It's appreciated," Murphy said. "...There'd be times when he was coming back [from injuries] and he'd still be a little banged up, a little nicked up. But he's still out there grinding with us and just showing us he's not leaving us out there to dry."

Murphy has a particularly close bond with Herb Jones and Jose Alvarado. They play NBA 2K, Madden and Fortnite together. Murphy (who claims to have a designated meme folder in his photos app) and Larry Nance Jr. helped disseminate "Herb Jones propaganda" via memes, graphics and tweets during the second-round pick's breakout season.

However, Murphy and Jones rarely faced off in practice as rookies. But during their extended workouts in New Orleans this summer, Murphy has marveled at Jones' stellar defense after getting an up-close view.

"This time was the first time I really went against him, and I was like, 'I understand why people don't really be scoring like that on him!' It's tough," Murphy said. "He's strong, athletic, really smart [and] just has great instincts. So, I understand."

Murphy has been bulking up too, and he says he now weighs 215 pounds. Fans who watched his two NBA Summer League contests saw an aggressive forward who was unafraid of contact.

"I'm just getting a lot smarter too," Murphy said. "Just knowing what's coming next, so you're able to brace for things; you're able to absorb force as well as distribute force when need be."

As a rookie, Murphy made just eight shots after taking two-or-more dribbles, and he shot just 20.5% on those attempts (per William Guillory of The Athletic). He matched those eight makes in two Summer League games. This bucket — where Murphy crossed over his defender, spun back around and nailed a mid-range floater — was a thing of beauty:

Murphy recognizes that his signature offensive role is as a shooter and spacer. He understands the value of knowing one's role in the league — a lesson that he says hit home specifically after listening to Draymond Green and Glen Davis on a podcast. At the same time, he's been working on tightening his handle this offseason, and he feels more confident that he can attack in an NBA game.

"I mean, I know when to do it [and] when not to do it," Murphy said. "Definitely, I'm gonna be aggressive, because I know that's what this team will need, especially coming from the second unit. And I'll just know when to pick my spots and pick my times to really attack and really go at it."

When Murphy does space the floor though, he thinks there's one player in particular who will help make his life easier: Zion Williamson.

Murphy vividly recalls a pregame film session before facing the Minnesota Timberwolves. While watching tape of the Pelicans' 2020-21 matchups against the Wolves, Murphy was awestruck by Williamson's floor gravity.

"He had the ball at the top of the key, and Minnesota is in a 1-2-2 zone, basically," Murphy explained. "They're all literally boxed in trying to guard him, and I was just like, 'If they have that much help [off of] me, it's gonna be a field day!' It's gonna be crazy because he just draws so much attention. Me being a smart player, I can cut that, I can stay on the three-point line — I can do a lot of different things."

Unlike last year, the Pelicans now have serious outside expectations to build on their 2021-22 playoff run. Murphy has his own motivations to assert himself as a core player and contribute to winning. While those pressures can sometimes weigh more on a given day, Murphy wants to keep New Orleans, and basketball, fun.

"At the end of the day, the NBA is stressful," Murphy said. "You're playing against the best players in the world. You have a forum. There's money involved. There's a lot of different things involved, and you just gotta have fun with it.

"Understand [that] you gotta be the kid that was playing in the driveway when you were 5 years old, and still have fun with it. Because if you don't have fun with it, then you're just not gonna enjoy it. It's not gonna be the same for you."