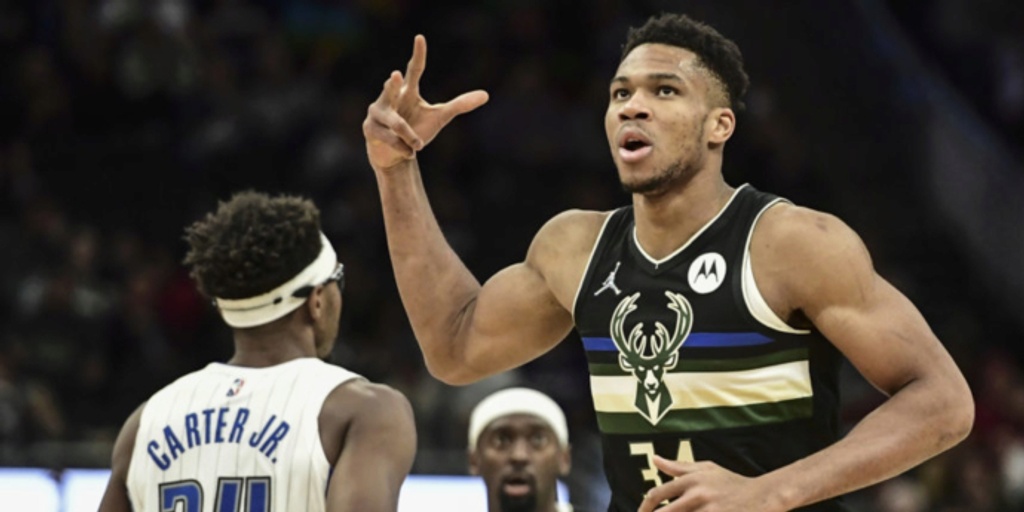 The Warriors are still sitting atop our updated power rankings, but the red-hot Suns are coming for the No. 1 spot!

How special has Steph Curry's start to this season been, you ask? Consider this: During the 1985-86 season, Larry Bird led the NBA in made three-pointers, knocking down 82 triples that year. Curry made 85 three-pointers over the first 15 games of this 2021-22 campaign. And, even when he has an off night (as he did Sunday, scoring just 12 points), the Warriors still spanked the Raptors behind 33 points from Jordan Poole and 32 points from Andrew Wiggins. Oh, and if that already wasn't enough offensive firepower, we learned last week that Klay Thompson has been cleared for full practices and is "trending toward" a return the week before Christmas.

The Suns knocked off the Spurs on Monday night to notch their 13th consecutive victory. That's tied for the third-longest winning streak in Suns history. The all-time franchise record for Phoenix is 17 straight victories, which they accomplished during the 2006-07 season.

Kevin Durant returned to action Monday night after missing one game with a sprained right shoulder, and he scored 27 points to help lead the Nets to a victory over Cleveland. Brooklyn also got an excellent lift from LaMarcus Aldridge (21 points and 11 rebounds off the bench) and first-round pick Cam Thomas, who scored a career-high 11 points vs. the Cavs.

The Bucks whooped the Orlando Magic on Monday night, entering halftime with a monstrous 77-36 advantage, the largest halftime lead in franchise history. The Bucks have won four in a row and remain undefeated this season (6-0) when Giannis Antetokounmpo, Khris Middleton and Jrue Holiday are all healthy and active.

Zach LaVine and DeMar DeRozan have carried the Bulls offensively this season. They both scored at least 25 points 11 times over the first 15 games of 2021-22. According to the Elias Sports Bureau, DeRozan and LaVine are the fastest pair of teammates to record 10 or more 25-point games since Elgin Baylor and Jerry West did so in 11 games for the LA Lakers back in 1962-63.

Washington is struggling of late, having lost 3 of its last 4 games. However, the Wizards will get some reinforcements up front in the near future, as both Rui Hachimura (personal) and Davis Bertans (left ankle sprain) were assigned to the team's G League affiliate Capital City Go-Go on Monday. Hachimura, who missed training camp and has been sidelined for the Wizards' first 17 games for unknown personal reasons, has been doing individual work at the Wizards' practice facility since early October and is inching closer to a return. (For what it's worth, I was tempted to knock the Wiz a bit further down the rankings due solely to the oversized sweater Kyle Kuzma wore to Monday's game, but decided to hold off.)

When you're off to one of the best starts in franchise history, you get to wear whatever you want😂@kylekuzma | #DCAboveAll pic.twitter.com/2drVu8PpGg

Utah had won three in a row before blowing a lead in the closing seconds to the Memphis Grizzlies Monday night. Fortunately for the Jazz, they have three winnable games this week, as they play the Thunder on Wednesday and host the Pelicans for a pair of games this weekend.

The Hornets have won 6 of their last 7 contests, thanks largely to the production from sophomore star LaMelo Ball. Over the team's past eight games, Ball is averaging a whopping 19.5 points, 11.1 rebounds, 9.1 assists, 2.4 steals and 2.6 made three-pointers.

With Kawhi Leonard (ACL surgery) out indefinitely, Marcus Morris Sr. sidelined by a knee issue of his own and Nicolas Batum placed into health and safety protocols for at least 10 days, Paul George has put the Clippers on his back this season. He's averaging 26.4 points, 7.7 rebounds, 5.2 assists and 3.1 made triples. He's currently on pace to join James Harden (2016-17) as just the second player in NBA history to average more than 26 points, 7 boards, 5 dimes and 3 treys per game over an entire season.

It appeared the Celtics were teetering and in some trouble early in the season, but Boston has won 8 of their last 11 and is currently riding a three-game win streak. Jayson Tatum has scored at least 30 points in each of his last four games, and is averaging 33.5 points, 8.5 boards, 3.8 assists and 4.0 made treys during this four-game span. However, Boston is about to enter a brutal stretch. After hosting the division-leading Nets on Wednesday, the C's play 6 of their next 7 games on the road.

Despite being forced to play without Joel Embiid (Health and safety protocols), Ben Simmons (personal), Tobias Harris (left hip) and Seth Curry (back tightness), the Sixers were still able to beat the Kings Monday night in Sacramento. Tyrese Maxey has been a beast for Philly of late, averaging 25.4 points, 4.4 assists, 3.4 rebounds and 1.9 three-pointers over his last seven games, while shooting a blistering 53.2% from the floor, 41.9% from downtown and 93.9% from the free-throw stripe.

Luka Doncic has missed three straight games because of a sprained left knee and ankle, but the Mavs are hoping he'll be able to return to action Tuesday vs. the Clippers. Encouragingly, Kristaps Porzingis has been playing much better. Over his last five games, KP is averaging 25.3 points, 9.7 rebounds, 1.5 blocks and 2.5 made treys while slashing 52/40/92%

The Nuggets have lost four straight games, with reigning MVP Nikola Jokic missing each of the last two contests due to a sprained right wrist. Worse yet, Mike Singer of the Denver Post reported on Monday that Michael Porter Jr. is dealing with a nerve issue that could potentially require another back surgery, which would sideline him for the remainder of the 2021-22 season.

After a terrific start to the season, the Cavs have now lost four straight games. And things won't get any easier this week, as they host the scorching-hot Suns on Wednesday night and then embark on a three-game road trip next week against three teams with winning records (Heat, Wizards and Mavs).

The Grizzlies notched one of their most impressive victories of the season Monday night by beating the Jazz in Utah. Desmond Bane poured in a career-high 28 points vs. the Jazz to go with 4 rebounds, 4 assists, 2 steals and 4 triples, while Jaren Jackson Jr. finished with 26 points, including a game-winning three-pointer in the closing seconds. On the season, Memphis is 7-2 when JJJ scores more than 13 points; conversely, the Grizz are just 1-5 when Jackson scored 12 points or less.

The Blazers have won 4 of their last 5 games, including three consecutive victories at home last week. After a slow start, Damian Lillard is heating up. Just named as the Western Conference Player of the Week, Dame is averaging 28.3 points and 8.3 assists while shooting over 39% from downtown during this three-game stretch. He has made all 22 of the free throws he's attempted.

Damian Lillard is named Western Conference Player of the Week!

The Lakers have lost 3 of 4, and will have to play without LeBron James on Tuesday night vs. the New York Knicks after he was suspended for one game due to hitting Isaiah Stewart in the face last Sunday.

It turns out all the Hawks needed to get healthy was some home cooking. Atlanta capped a perfect five-game homestand with their fifth straight victory Monday over OKC. On the season, the Hawks are 8-1 at home and just 1-8 on the road.

After a 5-1 start, the Knicks are just one game above .500, and RJ Barrett's nasty slump is a primary reason. Over the Knicks' last eight games, Barrett is attempting more than 13 field-goal attempts per contest, but is shooting a paltry 28% from the floor and 17.5% from three-point territory. Of the 215 players with more than 50 field-goal attempts over their team's last 10 games, Barrett is the only player in the league shooting below 32% from the floor and below 21% from downtown.

At this time last week, the Wolves were languishing with a 4-9 record. However, Minnesota has reeled off four straight wins. Unsurprisingly, Karl-Anthony Towns has led the way. Over his last four games, KAT is averaging 26.2 points (on 55.4% shooting), 9.2 boards and 3.0 dimes.

By following up a blowout victory over the Pels this weekend with another lopsided win over Chicago Monday night, it looks like the Pacers are starting to get on track. "It feels like we're getting our footing," Pacers coach Rick Carlisle said after beating the Bulls. "We're a team that's not going to get any free lunch from anybody. We've got to embrace that fact, and it's got to be something that brings us closer and closer together."

The Kings fired head coach Luke Walton on Sunday. Alvin Gentry, who most recently served as head coach for the New Orleans Pelicans, has stepped in as the interim coach. The Sixers spoiled Gentry's debut Monday night. Interestingly, Marvin Bagley III has logged double-digit minutes in 4 of the Kings past 5 games.

Shai Gilgeous-Alexander missed his first game of the season Monday night due to a sprained right ankle. OKC ended up losing in Atlanta, but rookie Josh Giddey was impressive, stepping in for SGA as the team's primary playmaker, as he nearly triple-doubled; Giddey finished with 15 points, 8 assists, 7 rebounds, 1 steal and 2 blocks.

The Spurs, who have lost five straight, are just 2-8 over their last 10, and have lost 12 of their first 16 games in a season for just the second time in franchise history. One bright spot for San Antonio has been Dejounte Murray, who recorded his third triple-double of the season Monday night, tallying 18 points, 10 rebounds, 11 assists, 3 steals with just one turnover in a close loss to the Suns.

The Pels are already 13 games under .500 and about to enter a tough stretch in their schedule. They host the Wizards on Wednesday, and they play a back-to-back in Utah on Friday and Saturday before heading to Los Angeles. Hopefully, we get some good news about Zion Williamson (right foot surgery) sooner rather than later.

The Pistons blew a 15-point fourth-quarter lead to the Lakers on Sunday night. Still, Detroit fans did get to enjoy a breakout performance from No. 1 overall pick, Cade Cunningham, who racked up 13 points, 12 rebounds and 10 assists to become the youngest player in Pistons franchise history to record a triple-double.

5 #Pistons scored in double-digits in last night's home game against the Lakers. @JeramiGrant recorded his 2nd 30+ performance of the season & a season-high 5 from beyond the arc. @CadeCunningham_ achieved his 1st triple-double in his 11th career game (13 PTS, 12 REB, 10 AST). pic.twitter.com/zNNBpGm5zt

After an impressive victory over the Knicks at MSG last Wednesday, the Magic lost three straight games to Eastern Conference powerhouses Brooklyn and Milwaukee. Cole Anthony, who is enjoying a breakout season and is the team's leading scorer, has missed two straight games. Unfortunately, Magic coach Jamahl Mosley said there is "no timetable as of right now" regarding Antony's return to action. "We're just going to keep seeing how he progresses as he goes through rehab," Mosley said Monday.

The Rockets are reeling, having lost 15 straight games. Since the start of the 2020-21 campaign, the only longer losing streak in the NBA belongs to... last season's Houston squad, which lost 20 consecutive contests.