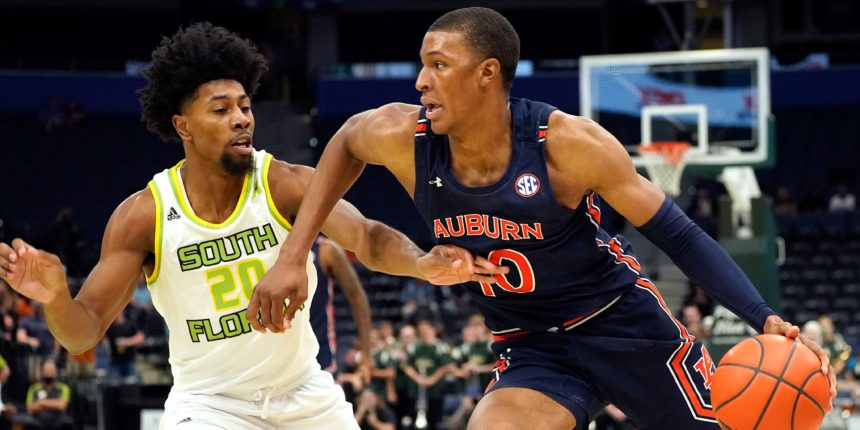 The college basketball season is underway, which means BasketballNews.com's scouting coverage has been kicked into full gear. The bulk of my travel and scouting schedule is set through the entire season, and let me tell you — I have some terrific basketball to see! As I scour the map evaluating prospects at various levels, I'll be sharing my takeaways every step of the way. I hope you enjoy it!

Here’s who I watched in-person this last week:

I am in Tampa, Florida tonight to watch top-rated Jabari Smith and his Auburn Tigers take on the South Florida Bulls.

To start the season, Smith, a 6'10" forward is averaging 15.5 points and 8 rebounds per game. He is currently ranked at No. 3 on our 2022 NBA Draft Big Board. pic.twitter.com/Yp1BgGkgEf

A little over a year ago, I visited Phoenix, Arizona to attend Dinos Trigonis’ Pangos All-American Festival. There, Paolo Banchero and Chet Holmgren stole the show. However, I was also able to see Jabari Smith, a 5-star recruit that was committed to the Auburn Tigers. I loved his potential as a mobile, stretch 4, but he seemed to be quiet and somewhat unassertive, and I was left with some questions about his lack of strength and overall toughness.

Fast forward to this past Friday, and I had an opportunity to see Smith for the first time with the Tigers as they took on the South Florida Bulls in Tampa, Florida.

Although it was not Smith’s best game — he only shot 3-for-12 from the field — I walked away thoroughly impressed. He possesses a unique combination of length, fluidity as an athlete and an ability to shoot the ball with range, giving him a ton of potential on the offensive end. On the defensive end, I’m not sure he is getting enough attention for his talent and upside. He has aggressive hands, covers a lot of ground laterally with ease and makes quick reactions. He has gotten much stronger, has a frame that looks like it will fill out very well, and subsequently, has become tougher and more physical. Any questions that I had about his lack of toughness and assertiveness have been tossed out the window. In fact, I’m not overly concerned about anything with him.

Paolo Banchero and Chet Holmgren are still top-tier prospects in my book, but Smith is not far behind, at all. He can score on all three levels and has a chance of being an exceptional defender. He checks a lot of boxes. I think he has a chance of becoming a prototypical stretch 4, which can’t be said lightly. If someone wanted to make an argument for Smith as the top prospect for this year’s draft, I’d be more than willing to listen.

We currently have Jabari Smith ranked at No. 3 on the BasketballNews.com 2022 NBA Draft Big Board.

Baldwin Jr., a smooth 6-foot-9 wing, is currently slotted as the No. 6 player on the @basketbllnews 2022 NBA Draft Big Board. pic.twitter.com/bne3hgnd9c

Prior to arriving at the O’Dome in Gainesville, Florida, I had seen freshman Patrick Baldwin Jr. before, but it had been a couple of years back at a USA Basketball mini-camp. Seeing him recently, his size was the first thing that grabbed my attention. Listed at 6-foot-9 and 220 pounds, he looked like a power forward and not a guard, the position he is listed as on the UW-Milwaukee website. I also noticed that he has huge hands, as he snatched the ball from the ground with ease like Kawhi Leonard might do. Once the Panthers began formal warmups, they split into two groups: guards and bigs. Baldwin worked out with the guards. I found all of that to be interesting. That said, it was immediately apparent that his skill level was very high. He handles the ball well and has a terrific shooting stroke, especially for a player of his size. Before tip-off, I was very intrigued, to say the least.

Once the game started, it was clear that UW-Milwaukee was far overmatched by an experienced Florida team. It was not a very good game overall. Baldwin showed flashes of his high skill level, consisting of abilities to shoot with range, dribble, pass and utilize advanced footwork. Despite Baldwin’s translatable tools and skills, his casual approach was concerning. I left the arena torn; I felt teased and wanted to see more. The good thing is I’m able to watch him again Tuesday night, as I’ll be in attendance to see his UW-Milwaukee team take on Bowling Green in Fort Myers, Florida. I’m also set to see him in Colorado on Dec. 10 — so stay tuned for more updates on him.

In the meantime, we currently have Patrick Baldwin Jr. ranked No. 6 on the BasketballNews.com 2022 NBA Draft Big Board.

I have a close eye on Florida State’s Matthew Cleveland tonight in Jacksonville, Florida, as the Seminoles take on the Loyola Marymount Lions.

Through 3 games this season, Cleveland, a true freshman, is averaging 8.3 points and 6.0 rebounds per game. pic.twitter.com/3WHjH4aSjG

Last spring, I was able to see Matthew Cleveland play for the first time, as his high school team (Pace Academy) was competing at GEICO Nationals in Fort Myers, Florida. I was impressed with him, as he was an aggressive and effective slasher and scorer. Although I can’t say I had a firm grip of him as a prospect going into the season, he had made a big enough impression for me to justify including him in our initial 2022 NBA Draft Big Board.

Sunday night in Jacksonville, Florida, I was able to see Cleveland for the first time with his new team and school, Florida State. Despite not starting for the Seminoles and head coach Leonard Hamilton giving 11 players double-digits minutes of playing time, Cleveland was able to show a lot of the things that made me like him in the first place. Listed at 6-foot-7 (I question if he’s actually that tall) with a reported 6-foot-11 wingspan, Cleveland is visibly long for a wing. Watching him, I found him to be extremely mature and poised, especially for a freshman; he made terrific decisions throughout the game. He has room for improvement as an outside shooter, but his ability to score as a slasher while also being a great defender is a valuable combination. I’m quite confident that he will develop into a steady contributor in the NBA — he’s solid! It is yet to be seen whether or not he’ll play a big enough role for the Seminoles this season to generate widespread media attention for himself, but let’s not forget that Patrick Williams was selected No. 4 overall in the 2020 NBA Draft after coming off the bench for Florida State as a freshman and only playing 22 minutes per game.

We currently have Matthew Cleveland ranked at No. 27 in our 2022 NBA Draft Big Board.

Next Week’s Preview: Prospects from Duke, Gonzaga and more