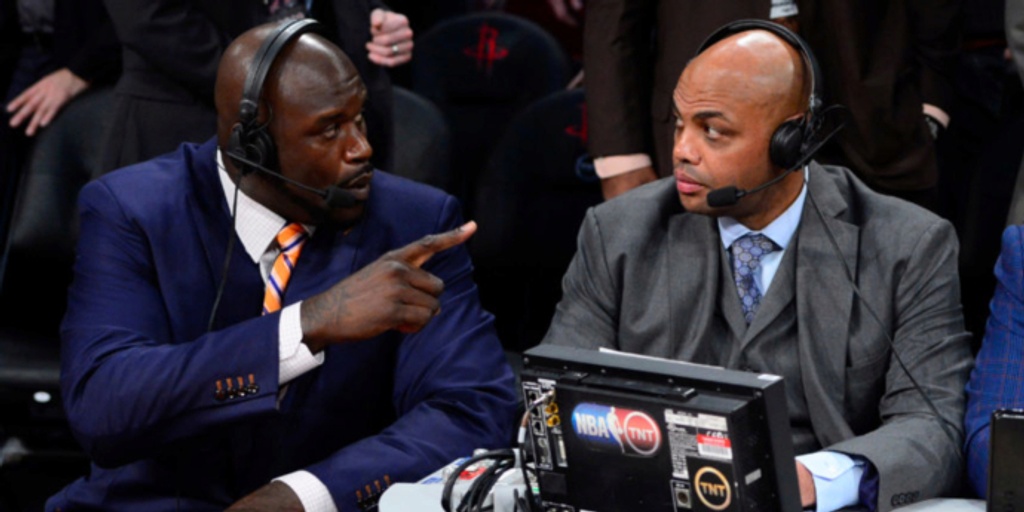 Shaq, Chuck, Inside The NBA and compromise

It’s no secret that "Inside the NBA" has been a critically-acclaimed success over the course of the last few decades. With countless memorable moments, quotables and the undeniable chemistry of the show’s current roster, it’s not often that it warrants pause or critique.

It's just some guys being dudes, discussing the premier matchups of the night in oversized, iridescent suits. But despite the harmless nature of this arrangement, the Emmy Award-winning broadcast has come under increased scrutiny over the past few days after several exchanges between the hosts and players, as well as the statements Charles Barkley and Shaquille O'Neal have voiced on the show.

As of late, it seems that the bit in which both Shaq and Chuck yell at clouds about timid big men and underachieving stars is no longer being received as the intended endearing and animated debate it once was.

“You are one of my favorite players, but you don't have what it takes to get to the next level,” O’Neal said to Donovan Mitchell following his 36-point, 7-rebound, 5-assist performance in a Jazz win on Thursday. “I said it on purpose and I wanted you to hear it. What do you have to say about that?”

Unsurprisingly, Mitchell didn’t seem interested in entertaining the demonstration of supposed tough love, and what would be categorized as a genuine inquiry by O’Neal was inverted into an uncomfortable overstepping of boundaries with Mitchell’s response of, “Aight..."

Guess the young star wasn’t interested in any fatherly advice. This is especially comical considering Shaq’s recent interview with blossoming Houston Rockets big man Christian Wood on the show, openly admitting he is wholly unfamiliar with the Most Improved Player candidate’s game, to which Wood referred to the once-superstar center as a “casual."

Successful shows require good ratings in order to retain their prime spots. It’s no question that the restrictions of social distancing have hindered the usual methods in which the Inside the NBA crew draw their viewership. No more pranks or wrestling, nor any live relocated shows outdoors amongst hometown fans during the playoffs. So it seems that the newly devised plan is to antagonize players, and from my vantage point, this has really highlighted the disdain some retired ex-players seem to have with the league’s current fraternity (as well as a disdain for the modern game, with both Chuck and Shaq repeatedly expressing a dislike for perimeter based big men).

I can’t say they’ve failed, since every player and host interaction seems to go viral on social media, but it could bleed into a future of awkward player/media interactions, a relationship that already requires work. Some have stated that younger players should be more receptive to critique by more experienced retirees, but in a response to an IG post suggesting the same, Kevin Durant wrote, "Them old heads need to go enjoy retirement, these boys have coaches they work with everyday lol."

Considering the timing of these live, postgame conversations, the intentional confusion regarding the nationalities of non-American players (no, Nikola Jokic is not Russian, Shaq), and Chuck's suggestion that athletes paying more taxes “deserve some preferential treatment” for a COVID-19 vaccine -- I’m inclined to believe that “Inside the NBA” is intentionally cultivating an environment of controversy and abrasiveness, as a means to get the people talking.

It’s been working. At what cost? We’ll find out soon enough.