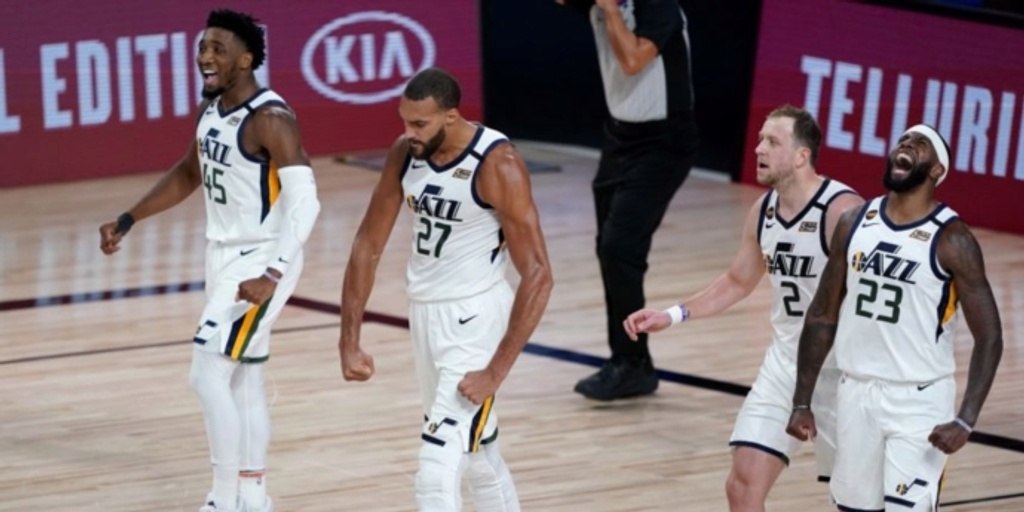 Jazz respond to Shaq: 'Their ratings must be so bad they have to talk absolute nonsense'

On Thursday night, Shaquille O’Neal and Donovan Mitchell had an awkward exchange on TNT’s “Inside the NBA” following the Utah Jazz’s win over the New Orleans Pelicans.

Moments after Mitchell’s 36-point, 7-rebound, 5-assist performance, O’Neal referenced an earlier segment in which he criticized Mitchell’s game and said that he’s more of a No. 2 or No. 3 option on a championship-level team.

“You are one of my favorite players, but you don't have what it takes to get to the next level,” O’Neal told Mitchell. “I said it on purpose and I wanted you to hear it. What do you have to say about that?”

Mitchell, unsure of how to react, responded: "Aight…”

After Shaq tried to get more out of him, Mitchell added, “I’ve been hearing that since my rookie year. I’m just going to get better and do what I do.”

On Friday, the back-and-forth had become a big story and a number of Mitchell’s teammates were asked about O’Neal’s comments. Here’s how the Jazz players responded to O’Neal.

JOE INGLES: “I honestly feel like their ratings must be so bad that they have to talk absolute nonsense. I've said it before... You just don't want to get caught up in it. At times, it's so irrelevant. You guys [in the local media] have been around us daily, [but] they just don't see what's going on behind-the-scenes. How many TNT games do we have this year? I think we have, what, three or four national TV games this year? So they see Rudy [Gobert] and they see Donovan three times in a year. I think [David] Locke tweeted it last night, but if you don't watch our team, [don't comment on it].

“If Donovan wanted to walk the ball up every possession and play ISO, he would average 35, 8 and 8. No doubt. But we have so many ball-handlers, so many creators. The best thing about Donovan being the superstar that he is -- and this has happened so many times with Rudy and Donovan -- is that Donovan will have a couple of turnovers or bad plays and he's like, 'Joe, take the next couple of possessions; I'm tired,' or, 'Things aren't working; they're blitzing me, so let me just play off-ball.' There's not many guys at that level who [will say], 'Hey, it's not working for me right now -- they're playing really aggressive with me, go take the ball and let's create from something else.' Then, he can get a wide-open shot from myself or Mike or whoever else is creating.

"We really don't give a shit about what other people think about our team. We really don't. If you get caught up in that stuff, it can affect your team or an individual, but I can promise everybody that Donovan went home and had an amazing sleep and when he wakes up, he won't be any different from how he was yesterday. We know what Rudy and Donovan mean to our group. Everyone can have an opinion, but we don't really care about anyone's opinion except for the guys in our locker room and the guys who are around us daily. Like I said, If Donovan wanted to go ISO every possession, I'm sure he'd have better stats, but he's not that type of guy.

"The coolest part -- which I don't think Donovan will care if I share -- is that Donovan genuinely didn't [care]. Like, it's cool that Shaq likes his game, but he's not going to lose sleep over if Shaq likes his game or not or if Shaq thinks he's a superstar or not. ... We don't need Shaq's TNT motivation, I think we have enough motivation within our group. (laughs) ... We don't need the outsider's motivation. I just thought it was funny. He could've picked a game when Donovan played like crap! At least pick a game when the dude doesn't play well! He had, like, 40 and 6 or something! ... The timing was the funniest part."

(via “The Joe Ingles Show” on The Zone Sports Network)

Ingles also referred to Shaq, Charles and Co. as "the blind people on TNT."

MIKE CONLEY: “I’ve been a big fan of Don’s, seeing the way he’s grown the last few seasons; I don’t know how you can make a statement regarding that and his progress at such a young age. He’s a guy that’s gotten better every year. He’s added to his game. He’ll continue to get better. We like to block out all the noise here, but sometimes things leak through and it just motivates Don even more. I’m thankful for that.”

RUDY GOBERT: “Whatever they want to call us, if we keep winning games, they’re going to have to watch us anyway. Hopefully they get to watch us until July and then they can call us what they want.”

The Jazz aren't the only NBA players going after the "Inside the NBA" crew. Kevin Durant recently took a shot at Charles Barkley saying, "I don't know why they still ask for this idiot's opinion."