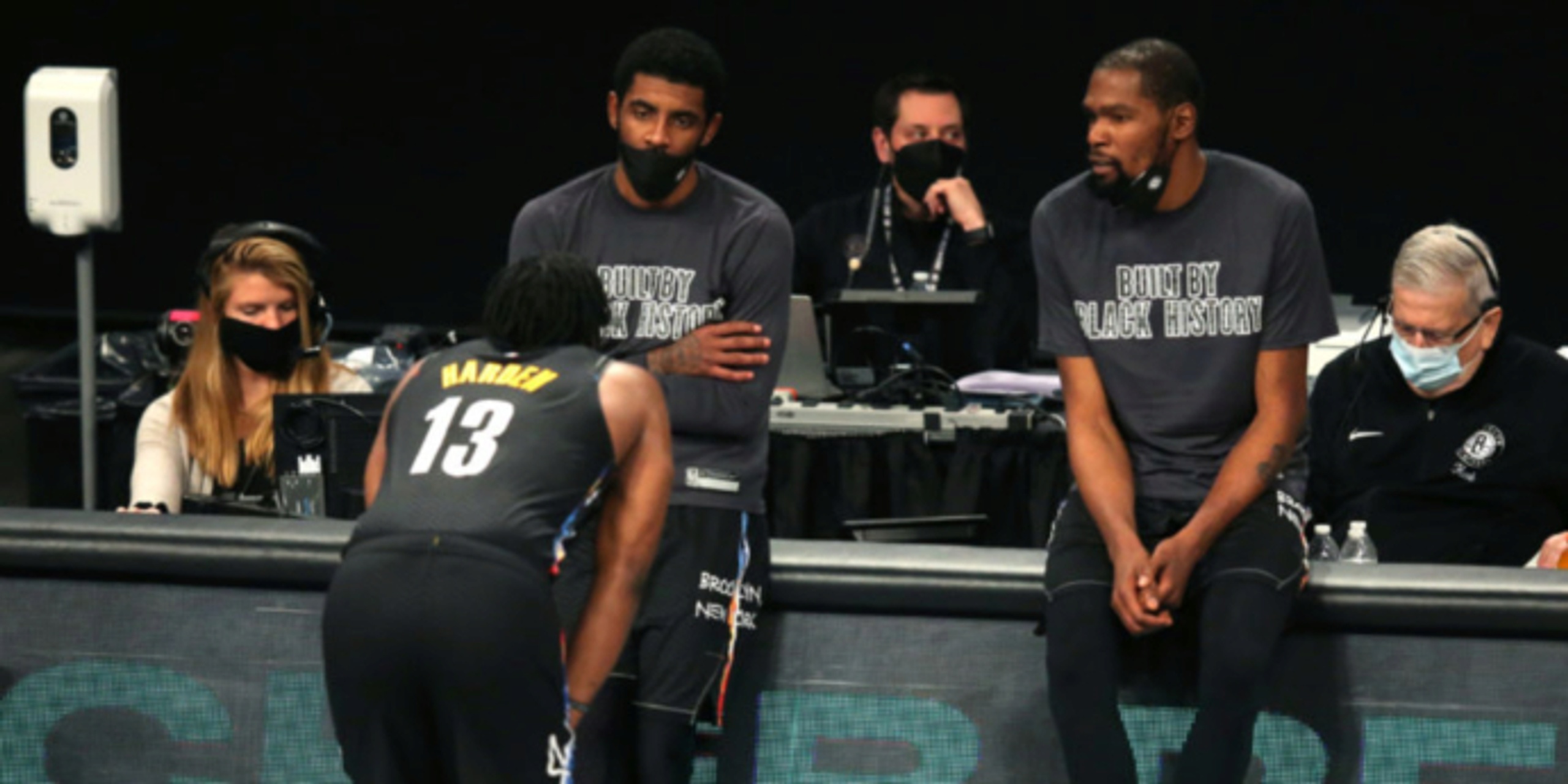 A timeline of the Brooklyn Nets’ early-season ruckus

All eyes are on the Brooklyn Nets, and why wouldn’t they be?

With three offensive powerhouses woven into the starting lineup in Kevin Durant, Kyrie Irving and James Harden, it’s difficult to not want to tune in regularly and see what they’re capable of. Considering this, it’s no surprise that the team’s inner workings and inconsistent start have garnered extra attention, leaving fans wondering about the validity of any deep playoff run.

There are a few things to note in the Nets’ current positioning. They’re clearly not finished in regards to team building -- an observation simply based on the ages of their stars and the perceived goals for the season after the blockbuster acquisition of Harden. Nets GM Sean Marks has said that they aren't done making moves. This is a team with immediate championship aspirations, so they’ll be assessed as such, with all the speculatory and accusatory fascination that comes with existing in the space of a team that could win it all. Located in New York to boot! And all of this is before even coming to terms with three stylistically-unique players in their primes, finding a way to alter the skill-sets familiar to them as a means to coexist.

BasketballNews.com covered the absence of All-Star point guard and NBA champion Kyrie Irving (read my piece here), and Brooklyn’s team was off to an instantly controversial and hotly-debated start to an already-so-very-strange season.

Recently, Irving himself commented on the many disruptions to the Nets' roller-coaster season, referencing the interruptions due to the coronavirus as well as an alleged conspiracy against the team by the league’s referees.

"We are the team that the NBA put the most games on. We're the team that gets someone taken out during COVID, during the games. We're the team that has to deal with the refs. We're the team that is literally battling against so many odds, that at this point, there's not even a reason to continue commenting on it," Irving said. "They are what they are. As a warrior that I am, and the energy that I have alongside my teammates, we just have to turn that corner, and we haven't done that, but we will, and I'm telling you, the league's gonna be on notice when that happens."

His comments, no matter how ambitious, speak less to the facts of the season and more so to the bubbling frustrations felt by the roster itself. So far, the Nets have experienced multiple interruptions to their player rotation due to exposures. These interruptions are not unique to the team, but it doesn't make them any less valid.

Literally, in the midst of a recent matchup with the Toronto Raptors, Durant was pulled from the game after 20 minutes of play because of an inconclusive COVID-19 test from someone within Brooklyn's entourage. The strange event began with Durant entering the game (in spite of the inconclusive test) and culminated with the superstar small forward being pulled from the contest -- an action that was, up until that point, unprecedented in the NBA. When coupled with Irving's seven-game absence -- and the unsavory controversies surrounding Harden's departure from the Houston Rockets -- it's easy to understand the poorly-veiled annoyance from the players, and even rookie head coach Steve Nash.

But all hope isn't lost... far from it, actually. A newly assembled team boasting intense star power has become synonymous with early chemistry issues (think of the 2010 Heatles, the 2018 Celtics, etc.).

It seems the issue of contact to a revolving door of team staff members, acquaintances and entourages of assistants and drivers has left star players in a constant state of susceptibility to exposure. Logically, star players would be in frequent contact with supporting staff in accordance to their workload and price tag, so this issue may not be resolved before season’s end, which is where I believe Irving’s frustrations lie. My curiosity's hinge on whether these interferences (that all teams are currently dealing with, to some extent) are having an impact on the Nets' actual play.

As it stands, Brooklyn, unsurprisingly, sits among the NBA's top-five offenses. You may have also heard that the team sits among the league’s top-five worst defenses. This year, barring any issues of health, we'll learn if these two facts can simultaneously exist within a team that possesses championship aspirations. I'm guessing "no," only because the Nets not only hold front-office competency, but they also have the assets required to make the marginal changes that have the potential to revamp their defense.

Because the changes are so marginal, it leads me to believe that those will be the franchise’s next steps -- with minor upgrades on the defensive end with their center and wing depth, having the potential to drastically alter the current lackluster effort on the court.

The first step is acceptance, and judging by what we’ve heard from the team, they are well aware of their deficiencies. Coach Nash evened echoed the sentiment.

"It's about personal pride," Nash said following the team's disappointing loss to the Detroit Pistons. "We have to decide what kind of team we want to be."

One can’t help but be compelled to watch closely as a franchise so self aware navigates the NBA season on their quest to attain what is, essentially, perfection.