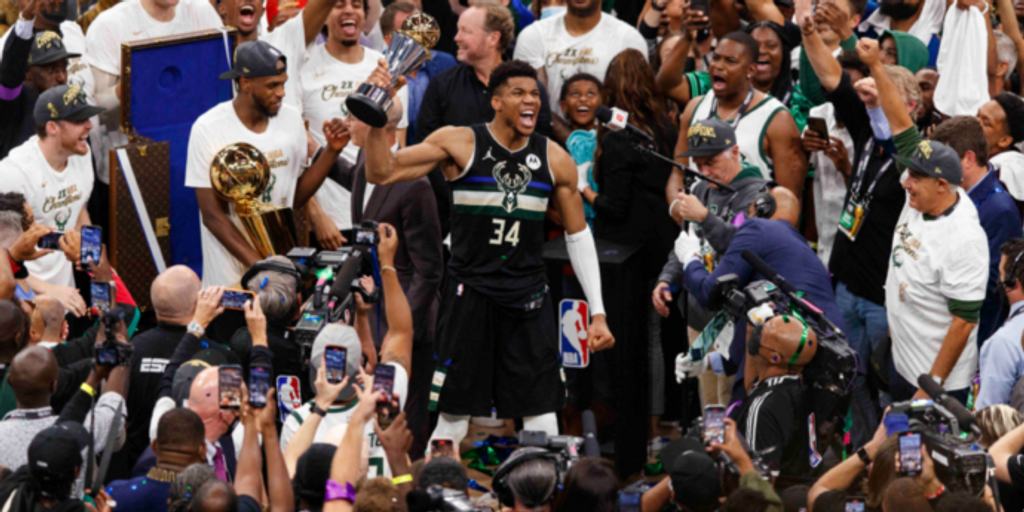 Bucks, Giannis prepared to continue their reign of terror on NBA

The Milwaukee Bucks are still riding their "championship high" for good reason. Thanks in large part to a perfect storm revolving around global superstar Giannis Antetokounmpo, Milwaukee won the NBA title for the first time in 50 years.

In Game 6, Giannis put together arguably the greatest individual performance in NBA Finals history with a 50-point masterpiece. Such a moment was a rubber-stamped seal of approval, especially after Giannis committed to Milwaukee for five more years by signing his supermax extension moments before the 2020-21 season began. Going all-in around Giannis with a top No. 2 option in Khris Middleton, plus Jrue Holiday and copious amounts of three-point shooters, worked out beautifully.

Now, entering the 2021-22 campaign, expectations are through the roof for an encore. With Antetokounmpo’s metamorphosis into one of the most dominant forces in the league, Milwaukee will always be a top contender to make another deep postseason run. This could be the beginning of Giannis' reign in the Eastern Conference, even with the juggernaut superteam based in Brooklyn as the Bucks' top competition. Giannis is running roughshod through defenses similarly to Shaquille O’Neal — dominance with sheer force. Since 2017, his playoff averages (27.3 points, 12.1 rebounds, 9.6 free throw attempts, 5.2 assists, 1.4 blocks, 1.2 steals per game) show he’s nearly scheme-proof, and he’s just now entering his prime years at 26 years old.

Giannis entered the league as a scrawny, unknown prospect from Greece. Now, he’s a physical Adonis with one of the most impressive individual resumes at this stage of his career in NBA history.

Once Giannis added "NBA champion" to his resume, I posed a question about whether Milwaukee should embrace him becoming a full-time center. O’Neal donned him the new Superman, and the comparison is certainly valid. When diving into the advanced metrics for lineups featuring Giannis at center, Milwaukee was dominating its competition. During the Bucks’ run to the Larry O’Brien trophy, Giannis' minutes at the 5 had resounding success.

The two most-used lineups for jumbo-Giannis lineups carried a plus-32.5 and plus-18.0 net rating in 127 total minutes. And looking back to regular-season action, some lineups simply ran teams off the court. For example, in 41 minutes, the following combination carried an absurd plus-48.3 NET: Jrue Holiday, Donte DiVincenzo, Pat Connaughton, Khris Middleton, Giannis Antetokounmpo.

When the Phoenix Suns exploited the Bucks in the Finals and took a 2-0 series lead, the main adjustment was more minutes for Giannis at the 5. The end result was Milwaukee bulldozing through Phoenix for four consecutive games. He likely won't become the permanent, full-time 5-man as long as Brook Lopez remains under contract, but the next evolution for Giannis will be to embrace a Shaq-like role. Once that goes into full motion, Milwaukee’s dominance could reach even higher levels than we’ve already experienced.

How the Bucks have built their roster around a freakish talent such as Antetokounmpo is marvelous. Middleton and Holiday are the ideal secondary options who can hold their own on each end of the court at an above-average level. Meanwhile, everyone else within the Bucks’ rotation is a legitimate threat from three-point range to optimally space the floor for Giannis to cause his game-by-game reign of terror on opposing teams.

Looking over the Bucks’ 2021-22 rotation, there are three notable differences. PJ Tucker, Bryn Forbes and Jeff Teague are now out of the picture, and Semi Ojeleye, Grayson Allen and George Hill are taking their places. It’s an upgrade at the reserve guard spot, but the jury is still out on whether Ojeleye can thrive within a Tucker-esque bench role of consistently hitting threes and defending bulky wing scorers.

The ecosystem Giannis will once again thrive within has eight players who can knock down the deep ball. It will allow Antetokounmpo to focus on what makes him one of the most decorated players in the Association. Take a look at Milwaukee's players in 2021-22 who were plus-37% three-point shooters in catch-and-shoot situations.

The system head coach Mike Budenholzer has put into motion is built around elite floor-spacing with an MVP candidate doing everything within the three-point line. Add in Middleton and Holiday, who can go off at a moment’s notice, and the Bucks have a formula in place that can reach unstoppable moments. It’s why the Bucks are not moving off the top-tier of the East anytime soon. As long as Giannis is being Giannis, Milwaukee is a championship threat every single season.

Previewing the 10-man rotation for the Bucks, it’s a well-balanced attack with very few holes to expose:

DiVincenzo is a major X-factor who figures to take another leap forward. Middleton and Holiday are 20-point per game scorers who flash star-like qualities. The second unit is well-balanced with ample amounts of three-point shooting. When you put everything under the lens, Milwaukee is poised to have a huge 2021-22 season. Giannis will continue to evolve, which is such a scary thought considering what his true ceiling could eventually become.

Ho-hum, another 55-60-plus win season with Giannis Antetokounmpo being a top name in the MVP race once again. It's the new normal for Milwaukee, and what a time it is for us to watch one of the best-constructed environments for a superstar to thrive within.