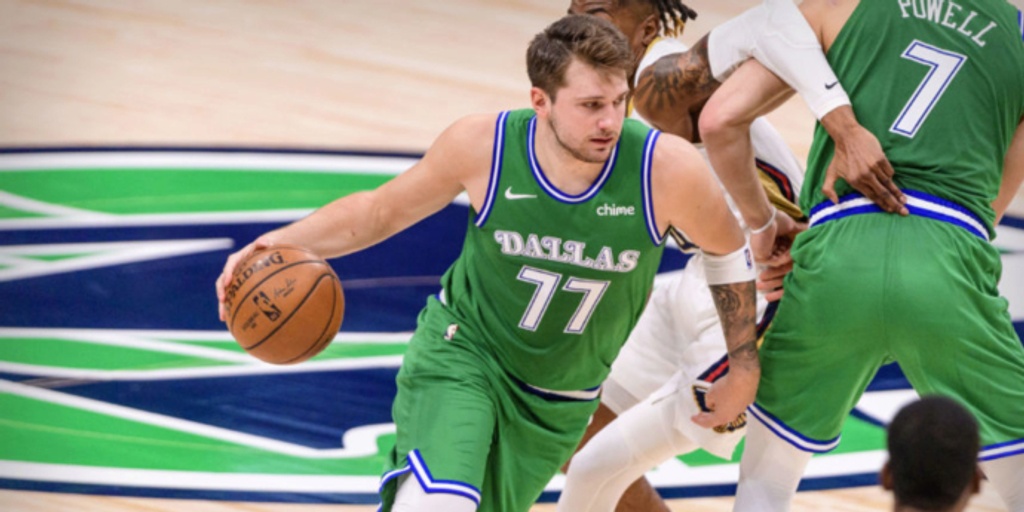 Luka Doncic is a 6-foot-7, 230-pound guard. You'd probably expect him to have an advantage with his size around the basket.

But with all of Doncic's dazzling dribble moves, pinpoint passes and stupefying stepbacks, it often gets lost that he is one of the most terrifying attacking players in the entire NBA. Doncic drives to the basket more than almost anyone else, and finishes with top-notch efficiency. His ability to get downhill and threaten defenses in turn allows him to whip out some of those highlight-reel dishes.

The Dallas Mavericks send everything through their young superstar — Doncic leads the NBA in usage rate by a wide margin at 40.5%, per Cleaning the Glass. He shoulders arguably the greatest offensive burden of any player, and he's only 22 years old. Doncic has earned that trust not only because of his electric (albeit streaky) perimeter game, but also because he has thus far been nearly unstoppable as a driver.

According to the league's player tracking data, Doncic averages 20.3 drives to the basket per game, which is second among all players behind Shai Gilgeous-Alexander's mark of 25.2. Within those drives, Doncic averages 8.4 field goal attempts and 8.8 passes per game, so a fairly even decision-making split.

What separates the Slovenian star is his high-level success going both ways. Doncic averages 12.2 points per game on drives — good for fourth in the NBA — and makes a scorching 59.2% of his shots (second behind Giannis Antetokounmpo). Then, he turns around and averages 2.3 assists per game off of drives — fifth-most among all players — with only a 6.4% turnover percentage, which is 28th among 54 players averaging 10-plus drives per game (a pretty regular turnover rate).

That's a lot of numbers, so in short: Doncic scores a ton on drives, at an esteemed clip, and creates a relatively high assist total without heaving turnovers in the process.

More generally, Dallas' franchise player was elite at his position around the rim. Doncic finished 68.9% of his attempts in the restricted area, putting him in a virtual tie for first among guards with De'Aaron Fox (min. 200 attempts). Step out a tad to what the NBA calls the "In The Paint (Non-Restricted Area)" zone, and Doncic is seventh-most effecient among guards with at least 100 attempts, making just over half of his shots.

All these buckets come with a mix of impressive vision, body contortion and touch. Look at the combination of moves in which Doncic has to get his looks, and then, the effortless nature in which he gets them to fall:

In this short montage, we see Doncic show off runners, floaters and fadeaways off of a pivot. He does an excellent job of pinning guards behind him and using that contact to gain separation. Doncic also utilizes a legal, softer swim move of sorts to lower his shoulder and power past defenders. No, he's not an Fox-type of explosive athlete — but he's as good, if not better, at using his craft to move where he wants.

And Doncic isn't just picking on guards. Watch as he catches Kevin Durant dancing and takes the bump to separate from one of the longest, toughest defensive matchups in the game. Against Bam Adebayo, Doncic isn't afraid to get physical, but can also fade back and finish with soft touch over the Miami Heat big man. The 22-year-old is a phenomenal finisher through contact, as emphasized in the clips below.

Look at the hang time on some of these shots. Doncic is levitating with the ease of a small guard despite his aforementioned 6-foot-7, 230-pound frame. The way he finishes is uniquely unorthodox; it's not with the grace of Kyrie Irving or the power of LeBron James. It's somewhere awkardly in the middle, but just as effective.

Together, Doncic's bag and body control warp defenses, allowing him to unsheath his all-world court vision.

These passes are insane. Try pausing the clip when Doncic is about to throw the ball. I genuinely could could not tell if he was planning to shoot or dish it off. He freezes weak-side defenders because they don't expect anything coming their way. How can you when Doncic is such an elite short-range shooter while giving no tells as a passer?

The Mavericks did not revamp their roster this offseason, so outside of re-signing Tim Hardaway Jr., they failed to bring aboard a secondary playmaker. But to be honest, I think it's an overblown need when Doncic is such a significant weapon with the ball in his hands. He held it the most of any player per game last season (8.9 minutes on average) — and he should. To be this impactful and this durable with this much of an offensive burden — again, at 22 years old — is extremely rare.

Instead, Dallas should be focusing on reinventing an atrocious defense that continuously bogs the team down in both the regular and postseason. Let Doncic be the aggressive offensive engine, because when he is, he's unstoppable.

This is the second installment of Ethan's Superstar Secrets mini-series. If you missed it, check out his breakdown of James Harden's underrated post defense and Jimmy Butler's precise passing.