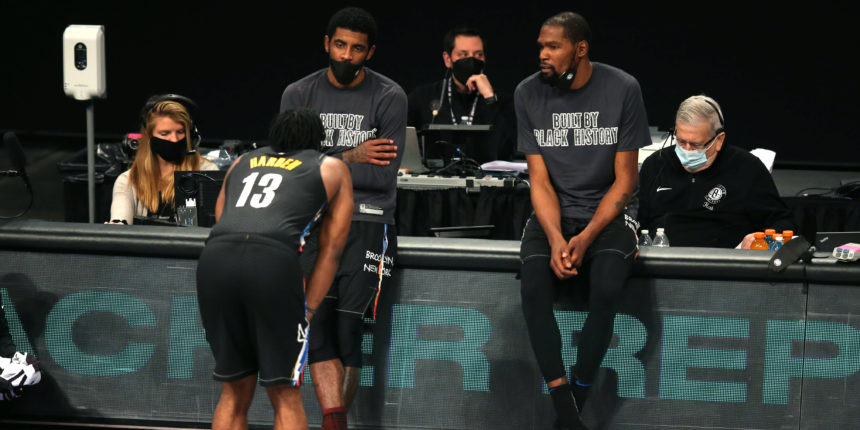 The Brooklyn Nets are a powerhouse, and they haven’t even reached their full potential.

Arguably the most potent scoring trio in NBA history — Kevin Durant, James Harden, Kyrie Irving — has only played 14 full games together. In those outings, Brooklyn was 11-3, with seven of those wins coming by double-digits.

In their first-round playoff matchup against the Boston Celtics, the Nets showed how unstoppable they can truly be at full force, winning the series in five games; all of those wins were by at least 11 points. With Durant, Harden and Irving on the court together, it creates endless pick-your-poison scenarios that make it seemingly impossible to decide what to do.

Want to stop Durant, a demigod-like, three-level scorer who looks totally fine after blowing out his Achilles tendon two years ago? Tough luck, the backcourt of Harden and Irving will pick your defense apart.

Want to focus on stopping the Harden-Irving duo? Durant will go off and have his way against any plans thrown up against him.

The Nets have a historically special offensive ceiling, one that can truly rival any throughout NBA history if all jells together perfectly. That's such a scary thought, especially when placed into win-or-go-home playoff situations. Having Durant, Harden and Irving take pressure off one another each possession helps preserve one another's energy, and it allows for each to get their own sequences and showcase their generational talents whenever it's their turn.

Having a strategy to defeat the Nets is almost nonexistent. As we saw in their postseason defeat against the Milwaukee Bucks in the Eastern Conference semifinals, the injuries that caught up to them ended up being costly. Even without Harden and Irving, a one-man band revolving around Durant almost beat the future NBA champions by himself.

Looking ahead to the 2021-22 season, it’s no wonder why the Nets are heavy favorites to take home the Larry O’Brien trophy.  Not only do they have endless amounts of star power, they have also improved their depth, which was relatively thin at points last season.

During this offseason alone, Brooklyn has revamped its roster, adding all of the following pieces: Patty Mills, Paul Millsap, Cam Thomas, Day’Ron Sharpe, Jevon Carter, LaMarcus Aldridge, Blake Griffin (re-signed) and Bruce Brown (re-signed). When dissecting the Nets’ rotation by splitting it into the starting lineup and second unit, it’s a loaded bunch that can relieve the inevitable nights when one or multiple stars on the team rest.

Not even including Aldridge, Carter and Sharpe into the equation — three more players who can play spot minutes when needed — Brooklyn is well-rounded enough to really take the next step to juggernaut status in 2021-22. Also, we should note the impressive job Nets general manager Sean Marks has done, assembling an intriguing young core that can develop long-term behind the veterans — Thomas, Sharpe, Brown, Carter, Nic Claxton and Sekou Doumbouya. The Nets have the perfect environment set up for young players to thrive within while not rushing along their development and forcing immediate playing time. Brooklyn has somehow achieved the perfect roster construction for the present and future, which is a beautiful outcome for the front office as they look ahead throughout the 2020s.

In the win totals for next season presented by Las Vegas oddsmakers, the Nets’ over/under checks in at 55.5. Personally, I think Brooklyn blows that lower-than-expected projection out of the water. Durant has another year post-Achilles injury upcoming, plus the Irving/Harden backcourt has had more time to mesh. With three stars who could go off for 40-plus points any given night, who knows which one takes the reins as a leading MVP candidate? I would bet on Durant, but it wouldn’t be shocking to see Harden and Irving also receive some early-season buzz with a lightning-fast start forecasted for the Nets.

Brooklyn and Milwaukee are in a tier of their own atop the Eastern Conference. And right now, I would definitely lean heavily toward the Nets dethroning the defending champions in a playoff series. How would the Bucks be able to stop a fully healthy Nets roster? What about the rest of the Association?

If the Nets are clicking on all cylinders, they can challenge for a mid-to-high 60-win season. The 2021-22 version of this Brooklyn team has the potential to be on a similar playing field as the LeBron James, Dwyane Wade, Chris Bosh-led Miami Heat, as well as the Stephen Curry, Klay Thompson, Draymond Green, Durant-led Golden State Warriors that caused seismic changes throughout the NBA. Assembling a terrifyingly talented scoring trio with the right amount of win-now veterans and long-term prospects, the Nets are ready to flex their muscles throughout a full 82-game regular-season schedule.

The only thing that can stop the Nets is themselves. Get ready for Brooklyn to take over the league with a forceful vengeance.

Who has the most efficient free-throw shooting season in NBA history?
16h