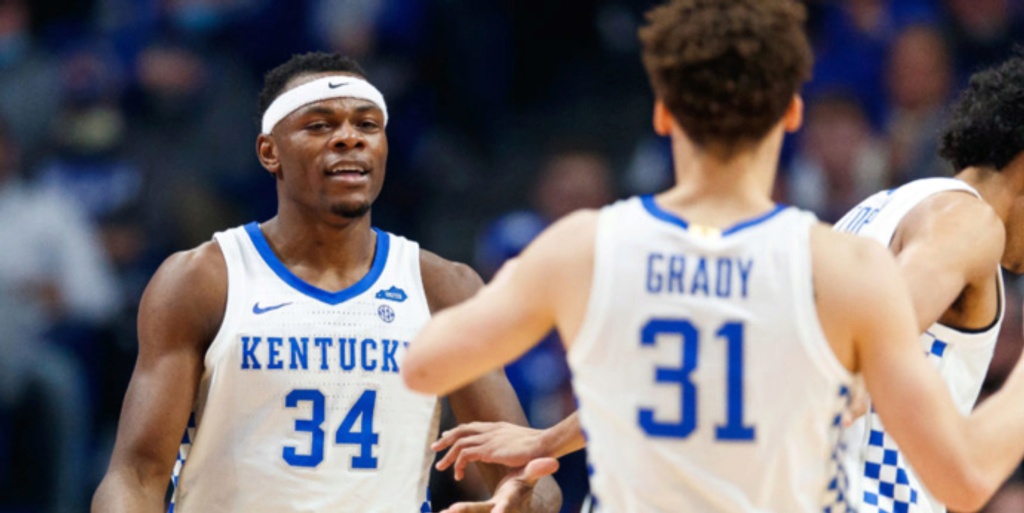 In a game that went down to the final seconds, the No. 6 Kentucky Wildcats were able to hold on and defeat the LSU Tigers by a score of 71-66. Oscar Tshiebwe had another phenomenal showing for Kentucky with 17 points and 16 rebounds, while Xavier Pinson had a great game for the Tigers, posting 26 points and 8 assists.

The Wildcats (23-5, 12-3 SEC) took a tough loss in Knoxville, but bounced back with a strong win against Alabama. They rank No. 2 in the nation in Adjusted Efficiency with a powerful offense and a rotation of players all clicking at the same time. Tshiebwe is in contention for Player of the Year, averaging 16.4 points and 15.2 rebounds (leads team in both), while TyTy Washington Jr. is making a case as a lottery pick in this year’s NBA Draft.

Louisiana State (20-8, 7-8 SEC) was handed a 77-75 loss at South Carolina last weekend, and needs to get back on track badly. The Tigers have the third-ranked defense in the country and are immensely talented, but have underperformed in conference play. Sophomore forward Tari Eason is averaging 16.9 points per game and is currently projected as a first-round pick in the NBA Draft. Darius Days remains reliable with 13.3 points and 7.8 rebounds per contest.

The game started with both teams trading buckets for the first 10 minutes, and then Xavier Pinson caught fire for LSU. The Tigers extended the lead to 27-16 behind a barrage of points from Pinson and Days, and they would hold a 31-23 lead at the break.

Kentucky started the second half with a three that got the crowd back into the action and on their feet, cutting the lead quickly to 33-28. Davion Mintz was hustling all over the floor for the Wildcats, and cut the lead again to 36-34. Kentucky freshman Bryce Hopkins had a huge putback and-one to take a 39-36 lead, and the momentum officially shifted. Hopkins connected again at 13:52, which forced LSU to take a timeout.

LSU's Tari Eason fouled out at the 9:27 mark to end the night with only 5 points and a single rebound. At the under-4-minute TV timeout, it felt like Kentucky was close to putting it out of reach. Jacob Toppin hit a triple to make it 65-50, but the Tigers made it interesting and clawed back to make it 68-62.

Things got incredibly dicey after a Wildcat turnover, followed by free throws, made it 68-64. Then, a five-second violation gave LSU the ball back under its own basket. Pinson wasn’t able to connect on a tough layup, and Kentucky would hold on to win 71-66.

Hopkins left with a standing ovation after posting 13 points and 4 rebounds. Mintz and Kellan Grady each had 13 points for the Wildcats. Eric Gaines scored 11 points, while Days ended with 10 points and 8 rebounds for LSU.