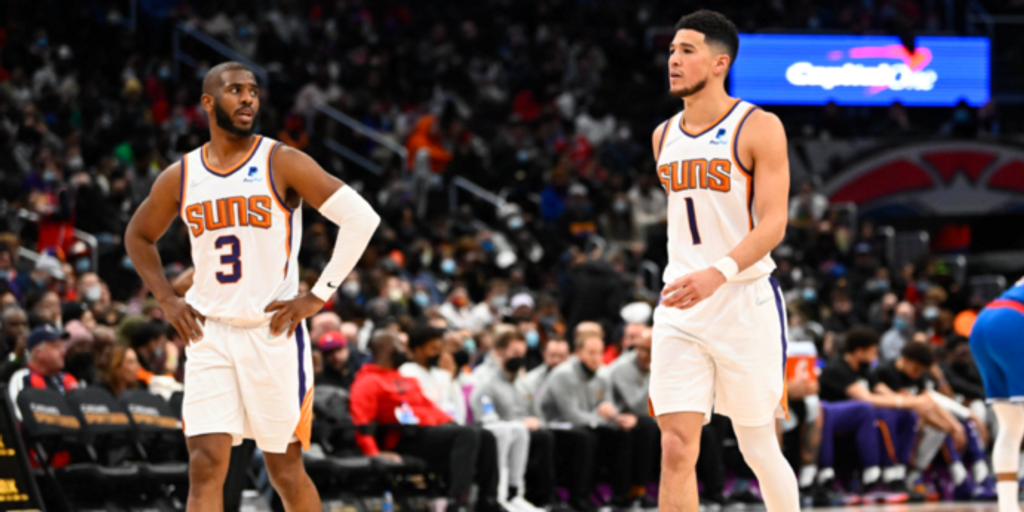 During the Phoenix Suns’ final game before the All-Star break, Chris Paul suffered a fractured thumb avulsion. Paul will now be re-evaluated in six to eight weeks, bringing Paul’s probable return right before the postseason begins.

Luckily for Phoenix, it is six-and-a-half games ahead of the Golden State Warriors for the Western Conference’s No. 1 seed, and it would take a noticeable slip for the Suns to be caught by anyone in the West. This will be a serious test for the Suns though, because Paul has actually avoided serious injuries on the court throughout his tenure thus far in Phoenix. Paul has only missed four games with the Suns, but this will now be a real evaluation period that could potentially help them in the long run.

Both Cameron Payne and Landry Shamet are expected to be back from ankle injuries after the All-Star break. Also, the new acquisition of Aaron Holiday now brings a sigh of relief for Phoenix's overall depth. Holiday’s tenacious defense and adequate floor-spacing ability have already made him an upgrade over Elfrid Payton as the Suns’ emergency third-string point guard.

Paul’s extended absence will cause major ripple effects on their offense though. With Paul on the floor, Phoenix is scoring 115.9 points per 100 possessions — 11 points better than when Paul sits for the Suns. (By the way, that’s tied for the best mark in the Association with the Utah Jazz for Offensive Rating.) In the small sample of minutes Paul has been off the court, this season more so occurring in blowout victories, the Suns’ ORTG dips to 105.4.

Since the Suns’ explosion, we’ve yet to really see Devin Booker run the show as much for obvious reasons. Booker playing extensively off the ball alongside Paul has helped conserve his energy for career-best defensive moments and being an assassin in the scoring department. Before Paul arrived, though, Booker had very important moments of growth as a facilitator in the Suns’ down years.

From 2018-2019, Booker operated with no starting-caliber point guard after Eric Bledsoe seemingly quit on the team via Twitter and was subsequently traded to the Milwaukee Bucks. Operating in the backcourt next to names like Payton, Isaiah Canaan, Mike James and Elie Okobo for an extensive period of time forced Booker into being the entire offensive operation.

Everything flowed through Booker every single possession, a baptism by fire so to say, but the Suns’ young shooting guard continued to blossom into a multi-faceted weapon. Booker’s playmaking allowed for Paul to have a steady running mate, and now with the latter sidelined for potentially the rest of the regular season, this could open back up that box even further.

Will Suns head coach Monty Williams stick to the plan and allow more minutes for Payne and Holiday alongside Booker? This seems like the best bet, but what about experimenting with Booker and seeing how it goes? Lineup combinations featuring Booker flanked by wings is a fun small-ball idea (Booker, Mikal Bridges, Cameron Johnson, Jae Crowder, Torrey Craig). And Booker’s capabilities running the pick-and-roll will lead to pick-your-poison scenarios with either Deandre Ayton or JaVale McGee. Compared to Paul, the drop-off to Booker isn’t as steep as many think in pick-and-roll efficiency (Paul: 0.99 PPP, Booker: 0.94 PPP).

Where Paul’s absence will be felt the most is in the moments where it matters most. Phoenix is on pace to be the best team in NBA history for clutch-time dominance. Paul’s stabilizing presence and precision running the show allow for Phoenix to stay afloat when most teams sink. Booker has been potent in the clutch as well, but how will it fare with one head of the two-headed monster gone for a little bit? Again, this is a potential growth moment for Booker and Phoenix. If the Suns experience little to no drop-off without Paul, Booker’s dark-horse MVP case will continue to rise.

All baskets by Devin Booker in Clutch Time this season.

(Under 5 minutes left in the game, score within 5). pic.twitter.com/060DOBftHy

After the All-Star break presumably through the end of the regular season, here’s how the Suns’ rotation will look.

Losing Paul is a huge blow in the short-term, but that 10-man unit alone is still a formidable one. The Suns’ trio around Booker — Ayton, Bridges, Johnson — should take pressure off the team's 25-year-old star, but show potential moments of growth as well. Ayton will immediately show whether or not he’s worthy of the rookie-scale max this offseason without Paul setting him up. Bridges and Johnson are ascending into potent scoring threats, but how will Paul sitting on the sidelines impact their overall efficiency?

Luckily for the Suns, their distance from everyone else atop the West could keep them locked into the No. 1 seed. If anything, this time without their leader allows for those relied upon most long-term — even past the Paul era — to deliver when the situations calls for it.