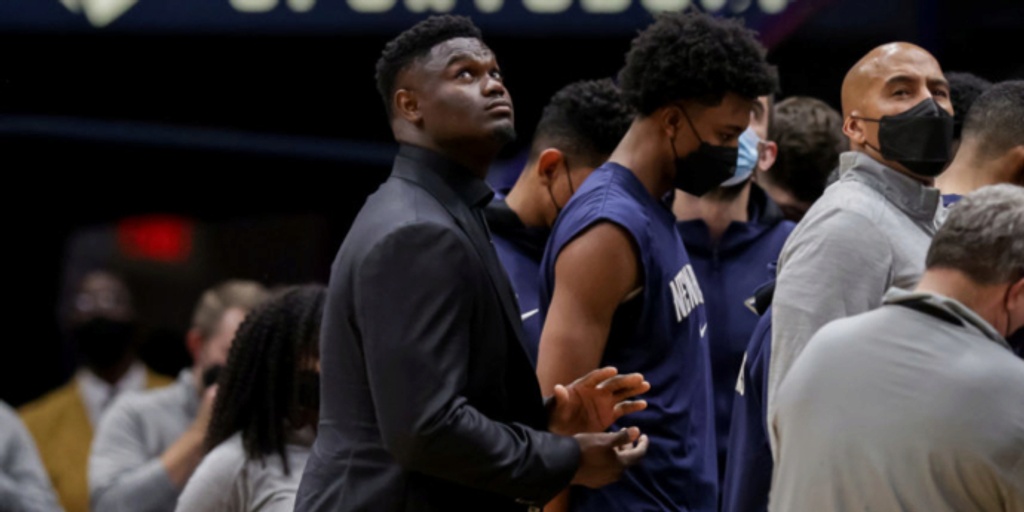 JJ Redick rips Zion Williamson for being 'a detached teammate'

JJ Redick hasn’t been a full-time NBA analyst for long, yet he has already emerged as one of the most insightful broadcasters in the industry. He has managed to separate himself from the pack in the five months since he announced his retirement from the NBA, and a big reason for that is his refreshing honesty and candidness — even when discussing his former teammates.

This was on display Tuesday morning, when Redick called out Zion Williamson on ESPN’s First Take. The two played together on the New Orleans Pelicans for a season-and-a-half, appearing in 49 games together.

Redick was reacting to CJ McCollum telling TNT that he hadn't heard from Williamson at any point in the two weeks since he'd been traded to New Orleans, and that he had only heard from “some people close to him.” On Tuesday afternoon, McCollum revealed to ESPN that he and Williamson finally had a conversation after his comment blew up over the weekend. But the fact that Williamson has been so distant and seemingly disinterested clearly frustrated Redick.

"This is a little bit insane to me. There’s a general decorum of behavior that you should apply as a teammate,” Redick said on First Take. “Look, I wasn’t the best player on any team that I was on… but I would always reach out to teammates. This just shows a complete lack of investment in your team, in the organization, in the city. I get that he's hurt and away from the team, but you just traded for one of the 50 best players in the league — a guy that's supposed to be paired with you. Reach out and say, 'Hello.'

“This is a pattern of behavior with Zion that we are seeing again and again. I was his teammate; I can describe him as a detached teammate, that is an accurate statement. This is the basic level of humanity as a teammate, sending a text to a guy when he gets traded to your team. That is just normal behavior, the bare minimum that you have to do.

"Yes, he's been amazing when he's been on the court, 100%. He's amazing to watch. There's no one that can do what he does on a basketball court... but as a teammate, there is a pattern of behavior. As a fully invested individual in New Orleans, there's a pattern of behavior. This is worrisome. New Orleans is going to have to make some sort of decision here. We’ve seen this now for three years.”

Redick revealed that he brought up similar concerns to Williamson back when they were teammates during the 2019-20 season, which was Zion’s rookie year.

The conversation shifted to whether Zion may want out of New Orleans and whether that may explain why he has been so detached. There have been reports about Williamson and his family being unhappy with the Pelicans, with some relatives apparently pushing for a change of scenery. Redick said it sure seems like Zion wants out based on the reporting and how he's acting.

“This is now another incident, another example, of that pattern of behavior [that suggests he wants out],” Redick said. “Yes, he’s never come out and publicly said, ‘I don’t want to be in New Orleans.’ But as we know, because we follow the league, where there’s smoke, there’s fire… With Zion, you’ve heard [rumors of him being unhappy] for the last three years.”

It's also possible that the Pelicans are growing frustrated with Williamson. Redick pointed out that the Pelicans recently sent out an email promoting 2022-23 season tickets and didn't mention Zion at all. Instead, it listed Brandon Ingram, Jonas Valanciunas and McCollum as the players who are "building something special."

The #WBD #Pelicans just sent email to season ticket holders about renewals for 2022-23 season and…
NO MENTION OF ZION 😳 pic.twitter.com/Qqu9kibRWk

“The Pelicans yesterday sent out an email about season tickets for next year and guess whose name wasn’t in the email? Zion’s!" Redick said. "What the heck is going on in New Orleans?”

Williamson has yet to appear in any games this season after offseason surgery on his right foot, and there was recently a report that he may need a second surgery on his foot in the near future (although nothing has officially been decided). In the meantime, Zion has been rehabbing away from the team in Portland.

Over the course of his three-year NBA career, Williamson has appeared in just 85 games, which has led to concerns about his longevity in the league. When he's been healthy, he has been dominant, averaging 25.7 points, 7.0 rebounds, 3.2 assists, 0.9 steals and 0.6 blocks while shooting 61.1% from the field.