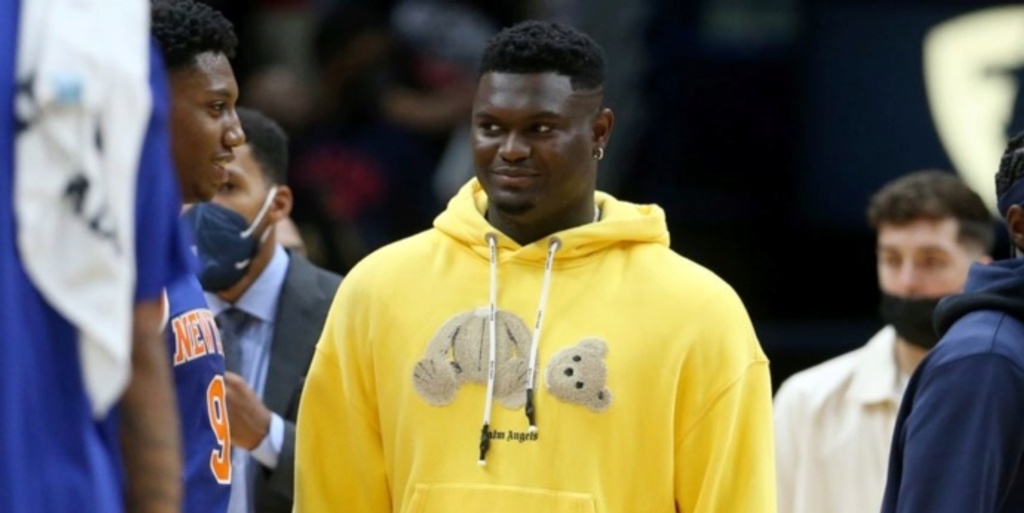 Is Zion Williamson the next Yao Ming?

That’s what we’ve been told, anyway.

Unfortunately, it would appear that Zion Willamson is testing the theory.

His massive stature is only surpassed by his incredible talent, but sadly — more than halfway through what should have been his third season — it’s looking more and more like Zion is the second coming of Yao Ming.

On Tuesday, Christian Clark of the New Orleans Times-Picayune reported that Williamson may end up requiring a second surgery to repair a broken right foot that has derailed his third season. And at this point, we can’t help but to point out the obvious as it relates to the young superstar — his body simply may not be able to stand up to the rigors of competing at the NBA level.

It certainly is a harsh consideration but, at this point, Zion has appeared in only 42% of the games that New Orleans has played since he was selected with the first overall pick in 2019.

In fact, Zion has played in so few games, that it might be considered disrespectful of Yao Ming’s career to mention the two in the same breath.

If you want to make anyone who’s covered the game feel old, just tell them that Yao was drafted with the first overall pick by the Houston Rockets 20 years ago.

Indeed, way back in 2002, the Chinese phenom became the first international player who didn’t play collegiately in the United States to be drafted with the first overall pick. He was the only man who ever made Shaquille O’Neal look relatively miniature.

Those that knew Yao well and saw him up close often marveled at the power he seemed to have hidden in his legs. Despite his svelte frame, Yao’s legs were like tree trunks. Although far from a high-flyer, at 7-foot-6 and playing between 305 and 310 pounds, he put significant stress on his lower extremeties and ultimately fell victim to it.

We may be witnessing the same thing happening to Zion.

With Yao, we found out the hard way that his body simply couldn’t hold up. Most people’s bodies simply aren't made to play 80-plus basketball games in the span of six months, which is exactly why so many players have only been able to do so with varying degrees of success (and availability).

After missing only two games his first three seasons in the league, things began to unravel for Yao in his fourth — he missed 25 games after undergoing surgery on his left big toe, and that was just the beginning.

He would miss 62 games over the span of his fifth and sixth seasons, before managing to play 77 games in his seventh. That seventh season ended prematurely, however, as he suffered a hairline fracture in his left ankle during Game 3 of the Rockets’ second-round playoff series against Kobe Bryant and the Los Angeles Lakers.

Yao would miss the entirety of the enusing season in 2009-10. It should have been his eighth. He returned for the 2010-11 season, but five games in — despite being put on a 24-minute restriction — he developed another stress fracture in his left ankle.

He missed the remainder of the season before announcing his retirement the following July.

In the end, he played just 472 of a possible 738 games over his nine-year career.

Believe it or not, and despite all of that, in the three seasons spanning 2005-08, Yao’s appearance rate of 65% was still much, much higher than Zion’s (42%). And with Yao, it was particularly sad because he and the uber-talented Tracy McGrady were joined in Houston. A duo that had championship-caliber potential simply didn't have the health needed to get a real shot.

In his latter years, we spent more time wondering what Yao would look like with more development and at or near 100% effectiveness. Sadly, we never got to see.

We may never with Zion.

If the Rockets could do it all over again, they probably would’ve tried to sell high (or, at least, sell at all) once Yao began spending more time in street clothes than in uniform. Players don't typically get healthier as they age.

Without a doubt, there would’ve been at least one or two teams out there that would have been willing to roll the dice on Yao, just as there were teams willing to take chances on oft-injured players such as Amar’e Stoudemire, Tyreke Evans and even Kristaps Porzingis.

As constituted, the Pelicans are a talented team, especially after having acquired CJ McCollum at the trade deadline. With Brandon Ingram and a few other capable players on the right side of 30 years old, the thought of cutting bait with Zion and taking advantage of another team’s willingness to make him their problem wouldn’t be absurd.

His value isn’t nearly as high as it was one year ago but, if the Wizards were able to find a taker for John Wall, it's easy to imagine that there would be a market for Zion.

Sadly, at this point, he can only be fairly regarded as a big if, whether we like it or not. And continuing to count on him in New Orleans is a proposition that’s looking less prudent with each passing day.

Truth is, we’d be hard-pressed to find a player of his size and stature who overcame such a turbulent injury history so early in a career.

Perhaps Zion can be the first.

At this point, though — especially through the lens of the great Yao Ming — it's probably safe to say that history isn't on his side.