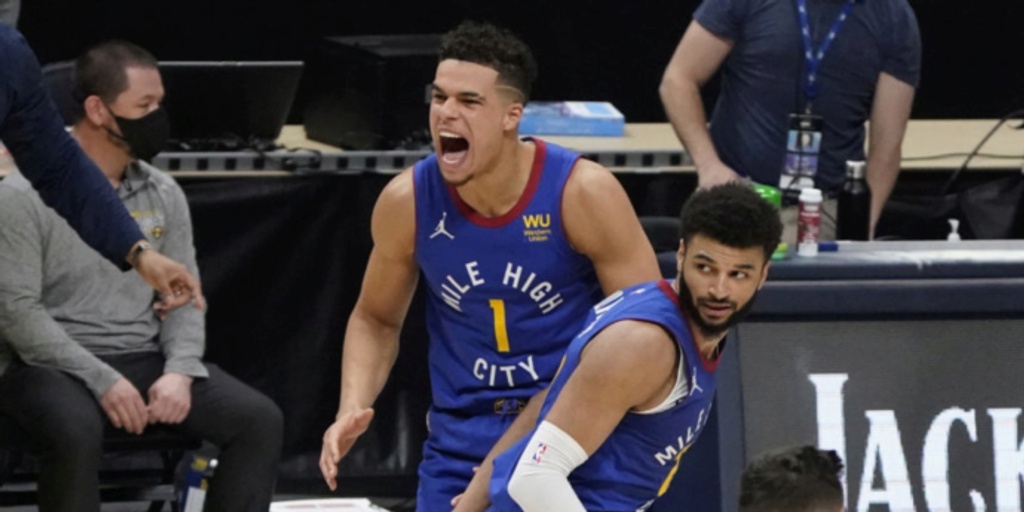 The NBA playoffs are fast approaching and as the season winds down, there are a total of 21 teams fighting for 16 playoff spots across the two conferences.

Between now and the start of the playoffs on April 12, some important players are expected to return to their respective teams, which could alter the NBA landscape in a major way.

On March 15, the Nuggets assigned Jamal Murray to their G-League affiliate (the Grand Rapids Gold) to get some additional work at practice. This sent waves through social media, as fans anticipated Murray's long-awaited return to the Nuggets' lineup. However, just a few days later, Nuggets head coach Michael Malone said that Murray is "not close" to suiting up.

Michael Porter Jr. is also on the mend, but the reports about his availability have been all over the place. There were rumblings that his rehab didn't go great and that he was further away than Murray. Then, there was a rumor that he's due back very soon.

A little over a week ago, Malone was asked about the possibility of Murray and Porter returning, and he said, "There is no immediate return on the horizon for either one of those players."

Denver is currently the sixth seed in the Western Conference, trying to stave off the Minnesota Timberwolves and avoid the Play-In Tournament.

Nikola Jokic has played at an MVP level (again) and the absence of these two stars has allowed for Bones Hyland to emerge as a legitimate rotation player as a rookie. Adding even one of these two players back into the fold would make the Nuggets a significantly more threatening first-round opponent for the Grizzlies, Warriors or Mavericks.

Since the acquisition of CJ McCollum on February 8, the New Orleans Pelicans rank No. 10 in offensive rating and No. 6 in net rating. While the Pelicans won't be getting All-Star power forward Zion Williamson back at any point this season, they did just have another impact player return to their lineup.

Larry Nance Jr. was acquired as part of the McCollum trade and he made his Pelicans debut a few days ago. The 29-year-old is a seamless fit on the offensive end and he'll give New Orleans some defensive versatility.

Even though we all wanted to see how this team would look with a healthy Zion, they have a solid core with McCollum, Brandon Ingram, Jonas Valanciunas, Herb Jones, Devonte' Graham, Nance and Co. — making them a scary opponent in the Play-In Tournament.

New Orleans likely won't catch the Clippers for the eighth seed, but they could steal homecourt advantage in the 9-10 game against the Lakers, as they are currently a half game behind L.A.

With LeBron James on roster, there always seems to be this lingering feeling that the Lakers will catch their stride and figure this thing out. But without Anthony Davis, it seems unlikely that Los Angeles will be able to escape the Play-In Tournament.

There has been no official word on a potential return date for Davis, but the Lakers would need him available if they hope to play beyond April 12.

Anthony Davis continues to do on-court shooting, per Frank Vogel, and is progressing each day:

“Anthony has had a good week … He’s had a productive week.”

The presence of Davis would inject a tiny sliver of hope that he and James could will this team to victory and into a revenge series against the Phoenix Suns in the first round.

Stephen Curry is expected to be out until mid-April at the earliest, which is a huge blow to the Warriors. Fortunately, Curry has said that he should be back in time for the first game of the playoffs.

The team has reintroduced Klay Thompson back into the fold, and Draymond Green is back in the lineup too. While Golden State's star-studded trio has only played three games together this season, at least the Warriors should have all three vets together for the postseason (barring any setbacks or new injuries).

Unfortunately, Golden State won't be at full strength, as James Wiseman was recently ruled out for the remainder of this season. The sophomore is still recovering from a torn meniscus that he suffered last April. Wiseman's size and versatility would have helped the Warriors, especially when facing the likes of Nikola Jokic, Rudy Gobert and Jaren Jackson Jr.

Golden State has been struggling without Curry, dropping four of their last five games (including surprising losses to the Orlando Magic, San Antonio Spurs and Atlanta Hawks). Golden State surrendered the No. 2 seed to the Memphis Grizzlies, and the Warriors could slip to fourth in the Western Conference, leading to a potential second-round matchup against Phoenix (instead of Memphis or Utah).

Still, assuming the Warriors have their Big Three, they will be dangerous in the playoffs.

Recently, Clippers head coach Ty Lue was asked about Kawhi Leonard and Paul George potentially returning prior to the playoffs, and he didn't shoot down the possibility.

"If guys are able to [return], they are gonna do it," Lue said. "But the most important part is making the sure the players are taken care of and making sure they're ready to go and fully healthy."

Leonard has been sidelined since last postseason, and Clippers fans have been holding out hope for a late-season comeback. ESPN's Ohm Youngmisuk reports that Leonard may be able to return if the Clippers make it out of the Play-In Tournament.

George has been sidelined due to a torn ulnar collateral ligament in his right elbow, and there is no timetable for his return. Recently, he has reportedly made progress and been cleared for 4-on-4 and shooting drills, so a return still seems possible.

The Bulls skyrocketed to the top of the East standings early in the season thanks to a supernova DeMar DeRozan and stellar defense. Two key cogs of that defense were Lonzo Ball and Alex Caruso, who have played just 35 and 36 games, respectively. Chicago also played most of the season without forward Patrick Williams, who's another important rotation player.

The absence of those two elite perimeter defenders caused the Bulls to slip to the East's five seed, and they are just one game ahead of the sixth-seeded Toronto Raptors.

However, here's the bad news:

Lonzo Ball will stop running on his knee for the next 10 days, per Billy Donovan. They’ve been trying to ramp him up but he hasn’t responded well

Ball may not be needed for Chicago to avoid the Play-In Tournament, but his return is crucial in order for the Bulls to make a deep run in the playoffs.

Colin Sexton is not coming back this season. In fact, it's possible that he has played his final game as a Cavalier since he's set to become a restricted free agent.

However, one of the main reason that the Cavaliers have exceeded expectations this season is the play of Jarrett Allen. Ricky Rubio was also a key cog in the Cleveland machine, but his injury back in December led to the acquisition of Rajon Rondo... who is also currently out with an ankle injury.

Allen's presence defensively next to Evan Mobley is crucial to the success of the Cavs. Cleveland's opponents take the ninth-most shots at the rim in the league, but they shoot the worst percentage. Their perimeter defense funnels opponents to the rim because of the three 7-footers they have on the floor.

For Cleveland to pull off a first-round upset, Allen must be present and continuing his career-year.

Unfortunately, injuries are a part of the game and oftentimes play a major factor in the postseason. This year is proving to be no different, as the field seems wide open due to injuries and the players who are returning could have a major impact on who is eventually crowned champion.

After arriving in Brooklyn, Ben Simmons began ramping up his conditioning and preparing to make his season debut, but then his back started giving him trouble. Initially, it was being described as back soreness, but he was recently diagnosed with a herniated disc and he needed an epidural for the pain.

Nets head coach Steve Nash has said that surgery isn't currently being considered. Simmons is working with a physical therapist and trying to get healthy enough to make his Nets debut. Nash told reporters that he's "fully expecting" Simmons to play at some point this season.

ESPN's Adrian Wojnarowski and Ramona Shelburne reported that Brooklyn hopes to have Simmons for a "couple" regular-season games so that he can start shaking off the rust and getting acclimated prior to the postseason.

Whenever he returns, the Defensive-Player-of-the-Year runner-up will provide a huge boost for the Nets. Last season, Simmons averaged 14.3 points, 7.2 rebounds, 6.9 assists and 1.6 steals with the Philadelphia 76ers.