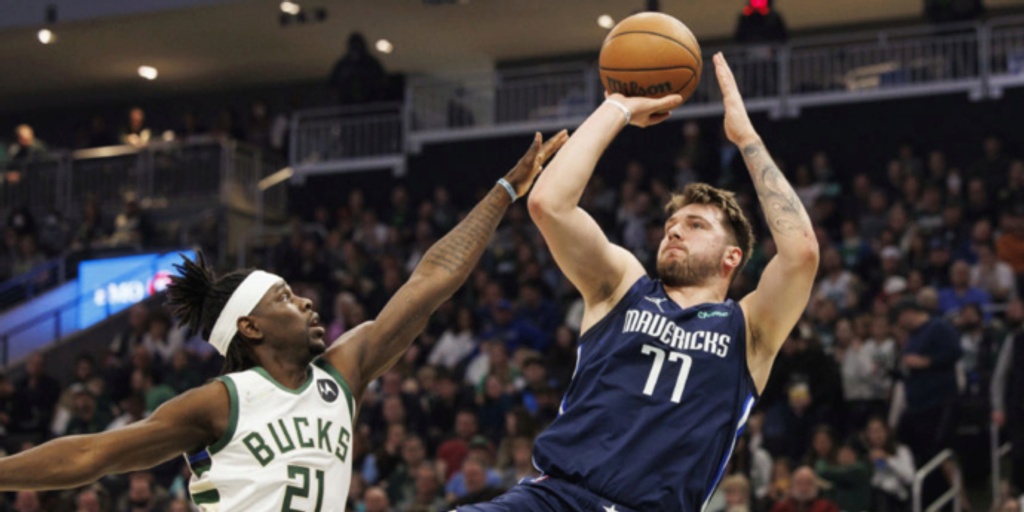 How to slow down Luka Doncic: Is it even possible?

I repeat, nine days until the NBA Playoffs are officially underway.

As I mentioned previously, to do my civic duty in aiding your preparation for basketball’s second season, I have decided to spend the next month studying some of the NBA's biggest stars and (hopefully) prescribing some tips for how teams can try to slow them down this postseason. (Here are my linked breakdowns of Giannis Antetokounmpo and Kevin Durant.)

But remember, these suggestions are only for slowing these stars down — because you can never truly stop the best of the best.

In the most recent episode of the Dunc’d on Podcast, Nate Duncan said this of Doncic: “[He] has an argument... to be the best playoff offensive player in the NBA.”

When I heard that, I did the Tiger Woods fist pump to myself, because I knew at that moment I had the introductory hook to my article.

In all seriousness, though, he’s got a point. This dude just might be unstoppable.

In my last article of this series, I posited the idea of using a balancing scale (between scoring and playmaking) when thinking about star offensive players. Guys like Kevin Durant and Giannis Antetokounmpo are naturally more inclined to score, while the scales’ of Nikola Jokic and Chris Paul lean more towards the playmaking side.

No such imbalance exists with Doncic.

Over the last two seasons, not one player has finished in the top-five in both points per possession and box creation (an estimate of open shots created for teammates). This means teams can’t load up on his scoring attempts or try to isolate him (90th percentile) to defang his passing without suffering some harsh repercussions.

Although the sample is small (13 games), his achievement of the perfect chemical equilibrium puts him in rarified air as far as postseason scoring goes.

Career Changes in Scoring/Efficiency From Regular Season to Postseason

His offensive versatility (the key to postseason success) is highlighted when you look at his counters in the pick-and-roll game.

Similar to the Phoenix Suns (who I spotlighted last month), the Dallas Mavericks run a ton of pick-and-rolls (No. 8 in frequency). However, their attack isn’t pioneered by a two-headed serpent. Instead, it's quarterbacked by the human manifestation of the Old Testament’s Leviathan.

If you opt for drop coverage against Doncic, he can hit you with his float game (90th percentile in the short midrange) or a lob over the top.

If you hedge/show against him, he’s too big, too calm, too cool (Hand Luka) to not see over the top of you and find the weak point in the defense.

Lastly, you can’t mitigate his impact with switches the way you could with the frailer Chris Paul/Devin Booker tandem. It's all thanks to his powerful frame (71st percentile or higher in post-ups from 2019-21), trusty stepback and aforementioned isolation brilliance.

Also, as if that wasn’t already enough, he’s improved his efficiency on handoffs to give his game an off-ball element.

Watching him for this article reminded me of an old Antonio Gramsci quote: “Pessimism of the intellect, optimism of the will.”

We are all smart enough to know that Doncic is probably going to decimate any game plan we attempt to deploy against him, but we can’t lose hope in our ability to slow him down. Here are three ideas Optimistic Mat came up with:

1. A little luck never hurt anyone!

Poor shooting has plagued his worst performances of the season. He’s shooting a combined 9 of 46 from three (19.6%) in the six outings where he’s posted a sub-10 Game Score. But it’s not really anything his opponents are doing that is slowing him down, as according to NBA.com tracking data, he’s shooting 9 of 39 on open/wide-open threes (23.1%) during those contests.

On the surface, banking on him having an off-shooting night seems demoralizing, but when you account for the fact that he’s fielded three months of sub-29% shooting this season, there’s a decent chance you could catch him on a bad day.

2. Get yourself an Aaron Gordon.

I’m partially joking here, but man, does Gordon have Doncic’s number. This season, Doncic is shooting a mere 7 of 24 (29.2%) from the floor during the 97.5 partial possessions he’s being shadowed by AG (per NBA.com). Widen those parameters a bit further, and for his career, Doncic is shooting a slightly better but still pedestrian, 22 of 73 (30.1%) throughout 287.3 partial possessions.

Gordon is strong enough that Doncic can’t simply veer into him on finishes, quick enough to reattach to him after screens and long enough that, when he crowds him, he can blur his sightlines.

And while Gordon himself isn’t cloneable (yet), players stemming from the same evolutionary branch have experienced some success of their own against the Slovenian. In the playoffs last season, Paul George and Kawhi Leonard were the only players who could hold Doncic to under 48% shooting from the floor. This year, De'Andre Hunter has held him to 4 of 17 shooting during the two games their teams have squared off in.

The formula for (partial) success here is finding a lengthy wing who can match Doncic’s unique blend of quickness and strength.

3. Throw the kitchen sink at him.

Despite not having a Gordon-esque body type on the roster (Jarred Vanderbilt is a little too lean), the Minnesota Timberwolves held Doncic to his lowest Game Score output of the season (4.5). And yes, some of it came from the shooting luck we talked about earlier, but the group also did a good job of throwing a ton of different matchups/coverages at Doncic.

During their March 21 showdown, I counted seven different Wolves guarding Doncic for at least a possession during the game. This revolving door of characters makes it so that Doncic can never fully figure out the cadence of his defender.

For instance, a smaller Patrick Beverely would probably get bullied if assigned to the larger Doncic for the entire night. But his pest powers become far more valuable when Doncic has just spent the past handful of possessions getting acclimated to the longer dimensions of a Taurean Prince.

The same logic applies to coverages. The Timberwolves are notorious for their aggressive approach to defending ball-screens. However, in this game, they coordinated their traps and blitzes with a steady diet of switches and drops, and this strategy ultimately befuddled the Mavericks' star for large portions of the game.

Feel-based players like Doncic need to be kept on their toes by throwing new problems at them to identify and solve at all times.

Regardless of what option you choose to rely on, you better bring your A-game when you stand by for battle, because anything less will be the equivalent of playing with fire.

And when your dealing with quite possibly the best postseason weapon in the world, you will most certainly get burned.