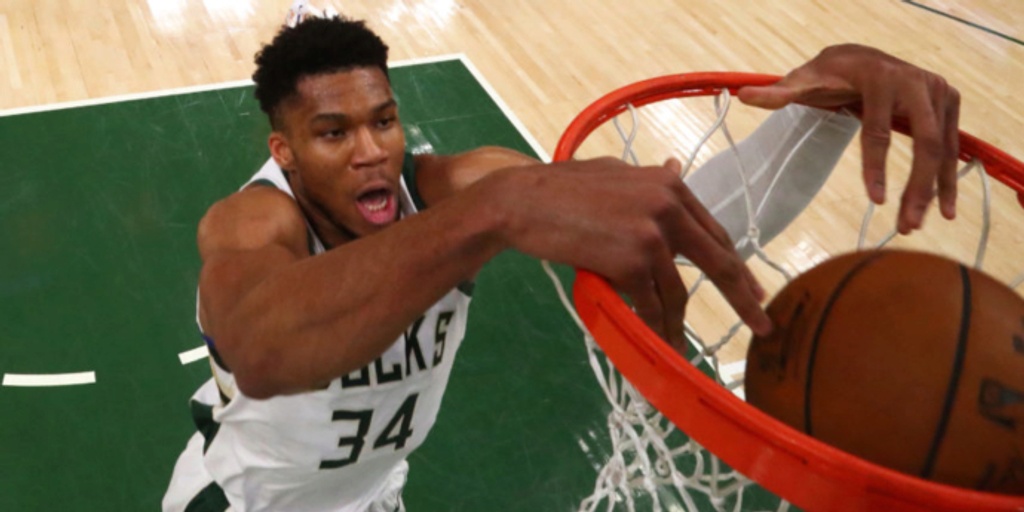 How to slow down Giannis Antetokounmpo: Is The Wall still the way?

March Madness indicates many things. Upsets, the overuse of the term bracketology, the start of spring, the beginning of pickup basketball games you promised yourself you'd get in shape for.

But for NBA fans, it’s also a friendly reminder that the playoffs are only a stone's throw away. So, here at BasketballNews.com, we figured it was time to start preparing you for the game’s second season.

And to do my part, I have decided to spend the next month studying some of the NBA's biggest stars and (hopefully) prescribing some tips for how teams can try to slow them down this postseason.

But remember, these suggestions are only for slowing them down — because you can never truly stop the best of the best.

Almost three years ago, the Toronto Raptors infamously built a wall in front of Antetokounmpo’s path to the rim. The following season, the Miami Heat reinforced this structure on their way to a 4-1 gentleman’s sweep.

Last season, however, Antetokounmpo was able to overcome his postseason demons on route to an NBA championship and Finals MVP award, prompting some to wonder whether past defensive tactics were growing outdated.

To answer this, let’s think about why this barrier was concocted in the first place. Antetokounmpo’s preferred scoring avenues — cutting, rolling, isolating and running in transition — all enable him to gain one thing: momentum. Once he has this kinetic energy, he becomes a nearly unstoppable locomotive.

The key here is the word “nearly” because, as a certain smart person once said, “An object in motion stays in motion… unless acted upon by an unbalanced force.”

Looking back at last postseason, while they ultimately fell short (or long), the Brooklyn Nets did a great job of deploying this defensive stratagem against The Greek Freak:

This season, teams like the Heat, Celtics, Suns and Knicks have also experienced some success packing the paint in this manner and forcing him to settle for low-percentage shots:

The key here is you need need NEED the right personnel to make this work. Big, strong, physical guys who evaporate space and can’t be moved by Giannis’ overwhelming force.

If you look at some of the guys who have given him the most fits over the last two seasons (keep in mind matchup data can be finicky), you notice a trend in body structure:

See what I mean? These are probably the five guys in the NBA (other than Antetokounmpo) that I'd least want to upset. Having a player who fits this physical archetype gives you a great foundation for that unbalanced force Newton was talking about.

Of course, this gameplan is far less bulletproof than it once was. Giannis has added some graceful counters to his drive game (the one I hyperlinked here would make Baryshnikov proud). And the kickout has become a much more viable option for him these days — thanks to the improved outside shooting the team has surrounded him with. The Bucks are currently sixth in the league in three-point shooting for the second-straight season after being 16th and 20th overall in 2019 and 2020, respectively.

Even with these changes, I’d still say The Wall is the weapon of choice for attempting to slow down Antetokounmpo. Despite being a great playmaker for his size, and adding in flying saucers like this to his game, his decision-making is still a bit inconsistent when he’s navigating through traffic.

Playmaking/decision-making can be a difficult thing to quantify because of all the immeasurable variables that go into the practice, but from the metrics we do have available, Antetokounmpo doesn’t look like a significantly different facilitator than he was in 2019 when the Raptors were able to capitalize on some of his lapses in judgment.

It’s also worth mentioning here that, while Antetokounmpo’s turnover rates are the lowest they have been since 2018 (a sign of improved control when navigating through the trees), his totals balloon back up to resemble his 2019-20 outputs when his co-star Jrue Holiday leaves the floor, per PBP Stats.

As I said, numbers can never fully explain the subtle intricacies of the art. But his stagnation in these stats at the very least suggests that the practice of packing the paint and forcing him to make correct reads should not be eradicated just yet.

Speaking of Holiday, opposing teams would do well to make Antetokounmpo forget how much of a revelation his go-to table-setter has been. When Antetokounmpo is playing off Holiday, it’s way harder to load up your defense on him. When Antetokounmpo is initiating the offense, whether it be via post-ups or pick-and-rolls, it becomes easier to calibrate stunts, which can sometimes lead to The Freak picking up his dribble a step early or forfeiting the ball altogether.

Timing is so important when you are unleashing that second defender on him. If the defender digs too early, Antetokounmpo can calmly survey his options and locate the open man. If help comes too late, he’ll have already barrelled his way through the seam. He’s that damn good.

Even if your group is moving and communicating perfectly, you still need great personnel. His four lowest Game Score outputs this season came against three of the top-four defensive units in the league.

And guess what? Even then, he has counters of his own. He’ll switch to full-on play-finisher mode. He’ll freelance for putbacks. He’ll create events on defense to ignite the fastbreak. He’s the ultimate scavenger of low-hanging fruit.

Such conditions project a bleak outlook for teams attempting to contain Antetokounmpo. But play your cards right, and you might shave a few points off his impact. And in a game dedicated by singular possessions, that might make all the difference.