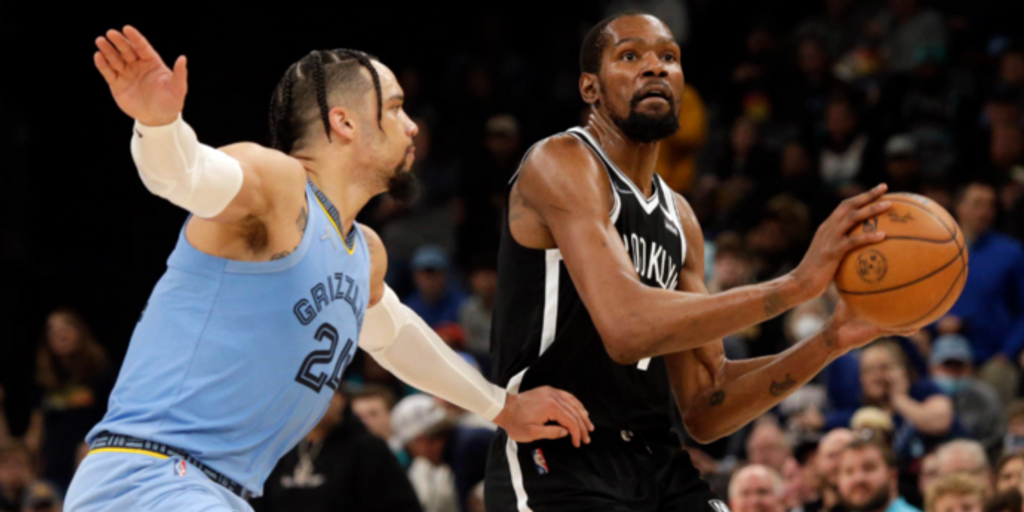 How to slow down Kevin Durant: Let The Reaper reap

We have 23 more days left until the start of the 2022 NBA Playoffs.

As I mentioned in my last article, to do my civic duty in aiding your preparation for basketball’s second season, I have decided to spend the next month studying some of the NBA's biggest stars and (hopefully) prescribing some tips for how teams can try to slow them down this postseason.

​​But remember, these suggestions are only for slowing them down — because you can never truly stop the best of the best.

While studying Durant’s game for "The Quest for the Best," one thing became immediately apparent to me: This dude is one of the best scorers that ever lived. And that isn’t just me talking in aimless hyperbole. Just look at how he fares against some of the best non-big man scorers of all time (scroll right on mobile to view full table):

In the playoffs, after some bumps in the road early on (well-documented here), KD’s become nearly unstoppable — putting together four consecutive postseasons of at least 37 points per 100 possessions and plus-60% True Shooting (per Basketball Reference).

On top of all that, he’s a sniper from the area of the floor most often-cited as one of the ideal offensive counters for a playoff series:

So what the hell do you do with this guy? Well, if you ask known-Durant anatoginzer, Patrick Beverley, you give Kevin exactly what he is looking for: the mid-range.

“We got him inside the three a lot, those contested twos, you know he makes a lot of them, [but] those are the shots we want," Beverley said after Game 5 of the Los Angeles Clippers-Golden State Warriors first-round playoff series.

Notice how he said contested twos. For Durant, those attempts normally come in isolation. This season, Durant is shooting 53.9% on twos where a defender is within 0-4 feet of him (per NBA.com). This equates to roughly 1.08 points per possession (PPP), which is less than his output on more comfortable shots like the ones coming off a screen, in transition or from a spot-up. More importantly, it’s meaningfully less than the average PPP of playoff teams from last postseason (1.15).

Of course, isolated incidents (haha, see what I did there) of contested mid-range jumpers can be a very healthy part of a balanced playoff diet, but in aggregation, the preponderance of those shots can chip away at a teams' efficiency in a meaningful way.

I know what you are thinking, so why doesn’t everyone do this to every star? Two words: rim pressure.

Normally, when you play stars uptight to hinder their three-point shot, the defenders are leaving themselves vulnerable to stampedes towards the rim. Guys like Donovan Mitchell and Ja Morant will burn you if you put your hands too close to the fire.

Unfortunately for Durant, he doesn’t pose that same threat (particularly at this stage of his career), as only 14% of his shots come from that area (11th percentile).

Still, you can’t simply just leave him on an island and let The Reaper reap (I only titled the article that because it sounded cool). There’s a science to it.

Ideally, you want physical defenders with a stronger base who can jam Durant up and gradually wear him down through the course of the game. You want them to have a high motor, so they can harass him off-ball and avoid letting him get free for open looks. In the pick-and-roll, you want defenders fighting over the top of screens to prevent him shooting threes over the top, while the defending bigs drop deep and invite the mid-range.

Lastly — and this the most important — when he puts you in his dreaded torture chamber, be ready to dance with the devil.

Before he even receives the ball, lean into him, make the catch difficult and don’t let him get into his natural flow (more on that in a second). When he’s got it, don’t instantly initiate the double team. He’s too good of a passer at this point. Wait until he’s built up the conviction to score, then disrupt his rhythm in the middle of his motion.

Think about offensive players as possessing an inner balancing scale. One end of the scale contains their inclination towards scoring, while the other end houses their affinity for playmaking. Durant has improved leaps and bounds in the latter category over the years, but he’s still a bucket-getter at heart. Take advantage of his predisposition towards that, and time your help accordingly.

It also helps that his Monstar-ish physical dimensions produce wild-body gesticulations that create easier opportunities to poke the ball free. His not-so-tight handles (29th percentile in turnover percentage) also make him a bit trepidatious to take dribbles in the paint, which partially explains why he so infrequently takes matters vertical (despite being quite accurate when he chooses to do so).

Overall, Beverley's strategy of more twos and fewer threes seems to be the way to go. In his 10 worst outings this season (based on Game Score), Durant has zero games where he hit 3 threes or more. Inversely, in his 10 best games, he has six such performances.

As with Giannis, Durant is too good not to have rebuttals of his own. Kyrie Irving is back to full-time employment, and together he and Goran Dragic can handle some table-setting responsibilities and allow Durant to work off of a bent floor. Whenever Ben Simmons is 100 percent, he and Durant will be absolute money in transition. And if teams ever send that too early, Durant’s got a new Curry brother to bestow with easy looks.

Oh, and by the way, even if you somehow execute this gameplan to perfection — as the Bucks did in Game 7 of the Eastern Conference semifinals last season — there’s a chance he drops 48 on your head.

If that happens, you just got to hang in the ring, withstand the haymakers as long as possible and pray to whichever omnipotent being you please that your efforts will ultimately be enough.