How the Washington Mystics are winning with activity

Heading into this week's action, Atlanta Dream rookie Rhyne Howard was leading the WNBA in scoring (20.5 points). It was an incredible feat for an incredible talent, one that we've talked about in this space.

Her jumper is pure, and she's able to get to it in a multitude of ways. To the Dream's credit, they've done a great job moving her around the chess board to stress defensess. Playing drop coverage against the Dream is practically begging for them to run a movement set for Howard.

They've run this doozy for Howard a few times this season. The decoy action may vary, but the goal for the Dream is to clear one side of the court before setting a flare screen for Howard to fill that empty space. The Los Angeles Sparks were ill-prepared for it earlier in the season.

The options are endless. If the screen hits, Howard can flow into a jumper like she did in the clip above. If the screen navigation is a little better, she has plenty of space to attack off the bounce. She can reset and go iso. It can flow into an empty corner pick-and-roll with whoever set the initial flare screen. Heck, they can just flip the angle of the screen and have her come the other way.

On May 20, Howard came out of the gates firing. She was facing the red-hot Washington Mystics, but it didn't feel like they could keep track of her. Howard would score 15 of her 21 points in the opening frame, including a bucket off an all-too-familiar action.

Backup big Tianna Hawkins (#21) sees it coming. Twice in the action--once while Aari McDonald (#2) is executing a handoff in the left corner, and again as Naz Hillmon (#0) is setting up the flare screen for Howard--Hawkins points toward the empty side. She knows Kennedy Burke has her work cut out for her, but she gets hung up on the screen anyway.

That brings us to the Tuesday matchup, where the Dream wanted to exact revenge for their five-point loss. Where Howard wanted to make up for a quiet three-quarter stretch. The Mystics simply weren't having it, and it was evident from the opening tip.

On the left side of the floor, you have Natasha Cloud (#9) blowing up the pindown and getting reattached to Kristy Wallace. Howard and Cheyenne Parker (#32) attempt to set screens in the middle of the floor to get the Mystics moving, but Ariel Atkins (#7) is able to navigate the muck and stay attached to Erica Wheeler (#17) as she clears the right side.

From there, it's go time.

The flare for Howard is coming, but look at the prep work Alysha Clark (#22) does. She gets inside of Howard's jersey before the screen is even set: 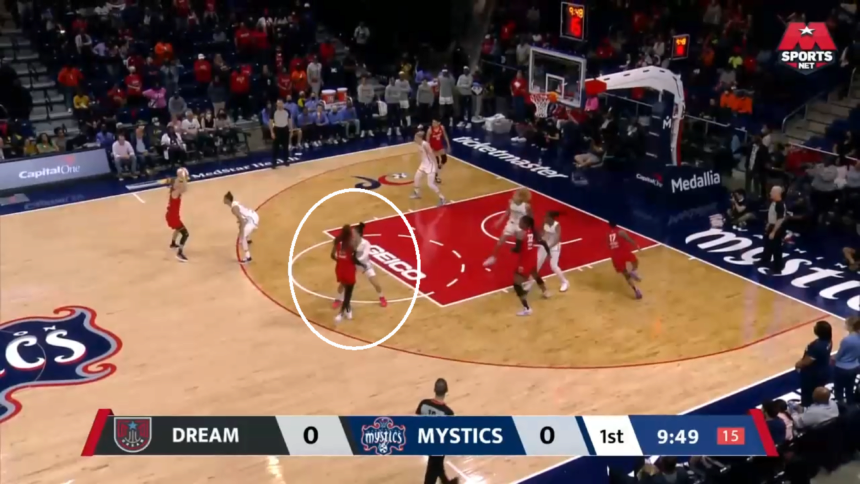 As Parker sets the pick, Clark is able to slow Howard up with a grab before she attempts to fly over it. 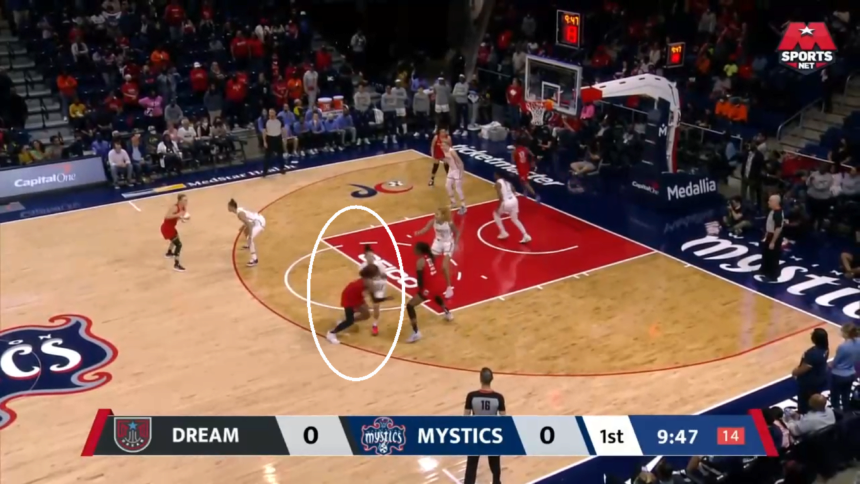 Doing the homework early essentially blew up the first portion of the set. Howard and Parker attempt to go into a pick-and-roll with an empty side from there, but the Mystics had other plans. They sprang a trap on Howard, essentially pinning her in the right corner. 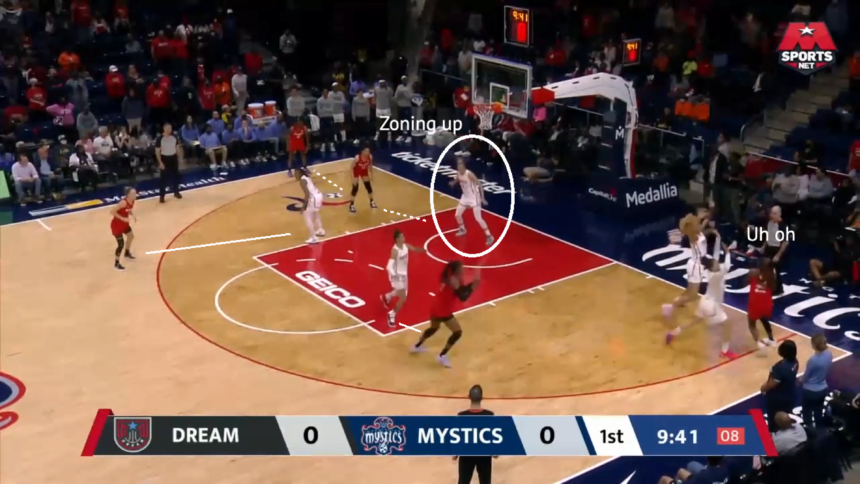 That's good work on Howard from Clark and rookster Shakira Austin. Cloud has the Parker assignment. Atkins has Wallace. Elena Delle Donne is on the backside of the action, keeping tabs on two Dream players on the right side of the floor. In other words, there are no easy outlets here.

Howard is able to jump-pass her way out of it, but the Mystics are able to rotate behind that pass. Wallace gets the release pass and is immediately pressured. The Dream do a good job of countering with a pin-in screen on Delle Donne, but she fights over it and gets a late-clock contest on the three from Wheeler.

Things didn't get easier for Howard or the Dream. On the individual front, Howard would miss all nine of her field goal attemtps and end the game with [checks notes] zero points. It was easily her worst outing as a pro. Her scoring averaged dropped from a league-leading 20.5 to 17.6, a clip that ranks 10th in the league.

And without Howard getting buckets, the rest of the team faltered. The Dream scored 50 points on the evening as the Mystics racked up a 70-50 victory.

If you want a not-so-hidden joy when watching this team, peep their activity whenever an offense tries to run a pick-and-roll from the wing. They attempt to "ICE" most of them, meaning the on-ball defender shades the ball handler toward the sideline. The fun really perks up from there, though.

Because they don't have a pure anchor in drop coverage, the pick-up points for their bigs are a little higher. And because all of their bigs--Austin, Delle Donne, Hawkins, Myisha Hines-Allen and freshly-in-the-fold Elizabeth Williams--are active with their hands, ball-handlers find themselves in trouble quickly.

Watching the Delle Donne-Austin frontcourt has especially been fun. There were questions about how Delle Donne would hold up defensively after her injury-riddled layoff. And it's always fair to wonder how quickly a rookie big like Austin can get acclimated to the big leagues. Both have embraced the challenge; in fact, the Mystics are allowing a defensive rating of 85 (!) when those two share the court.

Getting ball pressure from Cloud and Clark--a pair of wings with All-Defensive team selections under their belts--or Rui Machida off the bench (she's fun) is one thing. Having active bigs can add another layer of mayhem. Combining that with opportunistic help defenders can make an offense feel like it's suffocating.

Shatori Walker-Kimbrough is currently leading the team in steals (1.6), mostly off the strength of her off-ball prowess. Atkins (1.5 steals) isn't too far behind her, showcasing why she's also made multiple All-Defensive teams in her career.

I mentioned Burke getting burned by the flare action for Howard earlier in the piece, but she's already been a problem for offenses as a help defender.

That activity has been important. The Mystics currently rank third in opponent turnover rate, with offenses coughing up 21.2 turnovers per 100 possessions. That's way up from last season (17.9), and not too far off the franchise record (21.6) set back in 2005.

(And on that note, team offenses were way worse back then; the league average opponent turnover rate in 2005 was 18.1, much higher than the 15.9 mark this season. And we're early in the year, so that number will likely fall as the season goes on.)

We know what a healthy Mystics team can do offensively. Delle Donne is one of the most versatile offensive talents in basketball history. Cloud is a dynamic slasher and confident shooter. There's plenty of shot-making, shooting and driving equity on the roster.

The defense has been a pleasant surprise, though we may see regression at some point. Opponents are only shooting 31.4% from 3, and the multiple efforts needed to make their scheme work can create some openings on that front.

They may not be the best defense in basketball. But if they hover around 3rd or 4th, that's still much better than they were last season (104.4 defensive rating, 11th out of 12 teams). And if the defense can hang, we need to start talking about this team as a serious title contender.